Tom Coben staged magic acts while in high school. One of his tricks was bending cutlery by telekinesis. Much of it would end up in bizarre shapes. Then, he had an extraordinary idea. Now, age 19 and attending college, he has taken that idea to new heights.

I met Coben a year ago at Highland Fest 2008 in St. Paul. My neighbor, good friend, and Team Spatula member, Mona Ahlf, and I rode our bicycles down to the event, where we walked through dozens of booths with exquisite crafts, drawings, paintings, and jewelry. 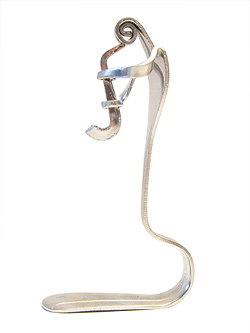 We found one booth with extremely unique jewelry where the artist had shaped forks into bracelets. The fork tines had been bent into various beautiful shapes. The creations were only $10 each.

We looked through the bracelets, as well as a few of the sculptures and figures, including the cutest snail made from a fork and a wonderful copy of Auguste Rodin’s The Thinker. I tried on a couple of bracelets.

I shared with Coben how excited I was about his craft—especially because I am in the food business. He demonstrated for us how he creates his bracelets. He offered to size several bracelets I was purchasing with the only mechanical device he uses: needle-nose pliers.

My friends loved the bracelets Coben created so much that I gave them away, one to someone in Grand Forks, North Dakota, and the last to Alex, an exchange student from France, before he returned home.

In the meantime, I had lost Coben’s business card. Fortunately, he was at this year’s Highland Fest. I bought more bracelets, got a couple of his business cards, and set up a time for the two of us to sit down and gab. We agreed to meet at my favorite hangout: Coffee News Café on Grand Avenue in St. Paul.

Coben says, “I started during my senior year in high school. It was for a project in my Environmental Studies class. We could either raise money, or volunteer for some organization. I did a sculpture at school using a fork. I sold a couple that day. Then, I made some more, sold them at parent/teacher conferences, and raised $300. I gave some of the money I raised to the school band. After that, I started exhibiting at art fairs last year. This year, I have been at the White Bear Market, Highland Fest, Grand Old Day, and Uptown Art Fair.”

When I asked Coben if he truly can do telekinesis, or if it’s just a trick, he paused a moment, smiled at me, and replied, “Of course I can.”

I asked, “Do you use anything other than forks?”

Coben responded, “No, only forks. I purchase large quantities from restaurant supply stores. I use different types and weights that will bend easily. The mineral mixture will change between types of forks, and that can cause breakage. I stay with stainless steel rather than sterling silver. I don’t use heat to bend, just my needle-nose pliers. I do get special requests from clients. Some have asked if I will use their heirloom sterling silver. I do have to tell them that I will do this at their own risk, because sometimes, sterling can break. I’ve even had my pliers break.”

According to Coben, sales have caught on because of the art fairs, especially during the holidays and Christmas.

I asked Coben if he would like to see his venture expand beyond what he’s doing now, and he shared, “It’s a hobby on the side. I make everything by hand—literally. If I did mass marketing, I would probably develop carpal tunnel syndrome.”

Some of the new designs that Coben is working on are figures such as a golf player and various musical instruments. He has assortment of “mood folks” that come in a variety of poses of people crossing their arms, thinking, and appearing strong. He shapes animals like elephants and giraffes. He has a line of sports figures from baseball to sword fighting (fencing). He has created an entire orchestra.

Coben accepts special requests or custom designs if the client will draw it first, and send to him.

If you’re looking for a wedding cake or GLBT union cake topper, Coben makes a pair of dancers, with one being dipped. Someone purchased the sword-fighting pair for a cake topper.

Keep a look out for Coben around the holidays to see his Santa in a sleigh with reindeers.

If you contact Coben, he will e-mail his Fork Sculpture catalog, photos, and information.

Now, I not only dine with forks, but also proudly exhibit them on my wrists and around my home. But I still have one question: Why doesn’t Coben use telekinesis rather than pliers?

John Michael Lerma is a local chef, author, Food Network personality, and “lifestyle guru.” His company Garden County Cooking offers cookbooks, cooking classes, consulting, and private events, as well as culinary vacations to Italy and the Caribbean. Visit www.GardenCountyCooking.com. Check out his “Word of Mouth” Blog under Extras at LavenderMagazine.com.