The 15th annual Minnesota Fringe Festival features a variety of queer-oriented shows that you will want to check out. Most of them last about an hour. In a society where queer content is not seen enough in film and performing arts, the Fringe is the ideal place to balance that out for yourself—and friends and family you might take along. 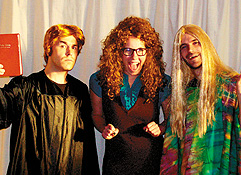 Director-playwright Adam Sharp finds humor in the fear-mongering (and homophobia) that gripped the United States after 9/11.

Actor Andrew Sass calls the piece “a farce that deals with issues that are deep-seated in the American consciousness, most notably, I feel, the sense of fear that swept the country, and how it was exploited.”

Sharp adds, “As for the ‘War on Terror’ and homophobia, I find them both equally ridiculous. The ‘War on Terror’ is an ambiguous war with no clear lines or boundaries. It has no end, and instills the fear of an illusive enemy that is anywhere and everywhere, and could be anyone. There was a time when you couldn’t turn on the TV without hearing about some new way terrorists were plotting to kill you. And it’s this same rhetoric that neocons have used and are still using to spread their ‘Gay Agenda’ agenda to the masses. I can’t tell you how many times I’ve heard televangelists and other conservative leaders preach on about how gays are going to destroy America. Through a six-degrees-of-separation use of ‘logic,’ these people essentially equate homosexuals to terrorism.”

The Attack of the Big Angry Booty

Out Los Angeles performer Les Kurkendaal, who returns to Fringe with real attitude, says, “The through line of the show is how I woke up one day, and realized that I had gained 20 pounds. For the first time ever, I was overweight, and it definitely changed how I felt about myself, so I decided to lose the weight, but I had to take a look at what was going on with me on the inside as well. Body image is a big focus in many areas of the gay community. Many men are focused on becoming that perfect gay prototype—the washboard abs, the perfect pecs, the swimmer’s build—and are in the gym day after day trying to achieve this. If it were for health, that would be one thing. But many men are doing this because they feel that it will bring them happiness and validation. They feel that if they don’t fit in this image, they aren’t worthy.”

Comic writer-performers and North Dakota natives Laura Bidgood and Curt Lund have packed ’em in at Fringe for two years straight with their not-so-straight Two Queers and a Chubby and Take A Left at the Giant Cow. This year, they tackle the plight of the nerd in Boys Don’t Make Passes at Girls Who Wear Glasses.

Lund characterizes it as “a mix of comedy storytelling from gay, straight, fag-hag, too-innocent-to-ever-think-of-such-things, and awkwardly awkward perspectives revolving around themes of nerdiness and the actual tangible object of glasses: what they symbolize; how they change what you think about someone; and how being a lifelong nerd changes your perspective on totally mundane experiences.”

The Bronze Bitch Flies at Noon and Dog Tag

Playwright Matthew Everett is back in the saddle with two plays, one of which, titled Dog Tag, was cowritten with Anne Bertram. Both feature Sasha Andreev, who wowed Fringe audiences a few years back in the gay Nazi drama Bent.

The Bronze Bitch Flies at Noon, in Everett’s words, brings “two guys together for sex, but they end up taking the tentative steps toward something more.”

Dog Tag examines the connection of gay men to their dogs, and through their dogs, to each other. Joe Bombard, who shared the stage with Andreev in Bent, plays the canine.

Imagine a musical Congressional race between left-wing Democratic professor Stephanie Leary (Marmy Nelson) and antigay Christian-right Republican Mindy Bishop (Kristen Strissel). In turn, the candidates are followed by two rival teams of documentary filmmakers, with elements of neocon media, lesbianism, and pot, as well as closeted Republican husbands and the conservative pastors who back them up.

Playwright John Ervin states that any comparison of Bishop to US Representative Michele Bachmann “is entirely intentional.”

20% Theatre is a troupe with a declared edge toward queer and feminist concerns, but its Fringe show doesn’t necessarily fall into such categorization. That said, Elephant Shoes and Olive Juice looks to be edgy in its style.

Performer Shannon Forney recounts that it’s an exploration of “live sound and vintage objects—typewriters, phone, Speak & Spell [an early electronic toy]—to create a world where we are asking: How does (mis)communication affect us in the modern world?”

Terrorist Eric Rudolph of the so-called Christian Identity movement, after hiding out for years, was caught, and pled guilty to the murderous 1996 Atlanta Olympics bombings. He also bombed an abortion clinic and a gay bar.

The characters in this horror musical, according to director Daniel Ellis, “have each been influenced by their direct relation to Eric Rudolph’s past. Their past personal connection to Eric fuels them to make a film documenting them capturing Eric, and claiming the $1 million bounty.”

Mic Weinblatt, a master director-playwright of camp and quirkiness, goes beyond queer this time around with this trio of comedies—beyond, because the first, Interface, involves sexual tension between two apparent men, but one turns out to be a robot! Edna waxes lesbianic and oddly incestuous, as we muse on the cloning of one’s mother. New Lease on Life is a gay man’s paradise. as an homage to screwball Hollywood comedies of the ’40s.

Johnson comments, “The description of Kevin is so vague and open. I asked Grant to make a choice as to gay, bi, or I guess what would now be called ‘metrosexual.’ Kevin chose gay, and so that’s what we’re going with.”

The vibrant Artistic Director of Buffalo Gals Productions, Perrin Post, is back with The Mistress Cycle, featuring Jen Burleigh-Bentz of Broadway’s Mamma Mia! fame. It’s called a musical mosaic of the choices and consequences of women, both historical and fictional.

As in the orange terror alert. This piece is a madcap spoof dealing with nuclear power, hostages, and fears surrounding sex—with some of that being homo sex. It has all the elements of edgy Fringe entertainment that pushes lots of buttons, makes lots of mischief, and causes you to think about the world today.

Lambda Literary Award in Drama finalist Dan Bernitt returns to the Fringe with a play about a fraternity whose image has been tarnished by a gay bashing. When one of the brothers comes out, it sets a panicked situation into motion, as all four characters are openly homophobic.

Bernitt shares, “I wanted to explore the factors involved in homophobia. As a gay man, it was difficult to be compassionate for these men who so strongly hate me. And what right do I have to create their voices, when I’m not a member of their group?”

That said, Bernitt came around to this: “I think my being gay was an advantage to finding the roots of their fear. Who else can so strongly write about masculine love than a gay man—one who loves his fellow man in the most intimate possible way?”

Director Terry Lynn Carlson triumphed this past winter with the trans play Looking For Normal. Now, he’s in full throttle with The Scarlet Lady.

Carlson remarks, “All the characters in the play are artists, and because of their economic and cultural status, they live on the fringes of society. Their makeup and circumstances push them so far to the edge, they can only go into themselves to find space. And the audience travels to these interiors with them. They live in hidden places: a dark theater, on the streets, in the night. Each character passes in and out of dream states, in an attempt to escape the harsh realities, even going so far as to flirt with the beyond. Whether or not they can return long enough to find life’s beauty is the intrigue of the show.”