Although it’s primarily a fund-raising organization bringing in thousands of dollars annually for local charities, the Imperial Court of Minnesota (ICOM), founded in 1992, does so by hosting fun events, mainly drag shows with plenty of crowns and gowns.
On August 15, ICOM is mounting its grandest spectacle of the year, Coronation XVIII, with the theme “A Wild Journey under the Egyptian Sky: Exploring the Temples of Celestial Beings.” That night, Empress XVII, Billie La Tease Austin, and Regent Emperor XVII, Darin Hatch, will step down after a very successful reign. 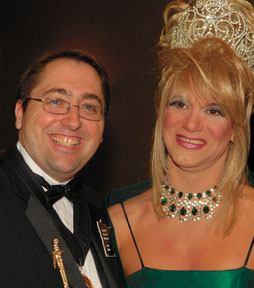 For the first time in ICOM history, no monarchs actually will be crowned at Coronation XVIII. Rather, the organization is planning to spend the next year revitalizing itself. Instead of new monarchs taking the lead, as in the past, the entire membership, especially past monarchs, will guide ICOM. But fund-raising for local groups will take place as usual.