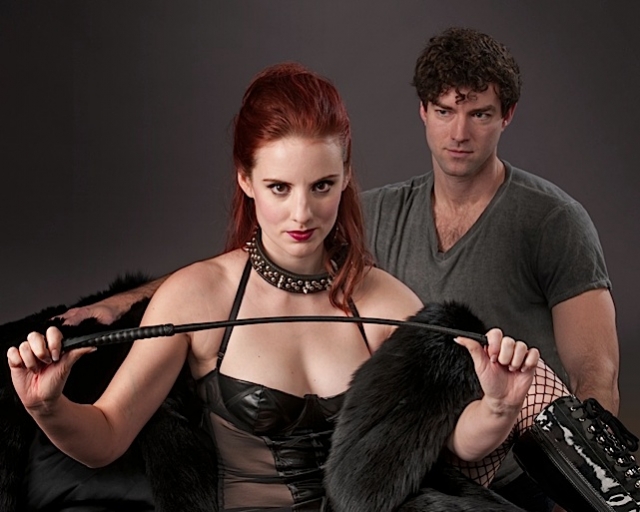 When the subject of Bondage and Submission comes up, people often do one of two things: recoil or giggle. But domination and submission are basic dynamics, both underlying and overt, within nature. We seldom consider that hierarchies we all, without exception, automatically and systematically participate in, are reflections of that.

Playwright David Ives draws from a classic 1870 novella which some regard as pornography, Venus in Furs (plural) by Germany’s Leopold von Sacher-Masoch. Hence, the term ‘masochism’ as in ‘sadism and masochism’ aka ‘S & M’. The term ‘sadism’ derives from the previous century’s controversial and often violent figure, the Marquis de Sade.

Ives has ingeniously and with bold intimacy captured the broad and subtle dynamics of dominance and submission in his Tony-nominated Venus in Fur (singular) which recently received a magnetic production at the Jungle Theater. In doing this he reveals how sexual feelings are intertwined intricately with what is typically considered nonsexual behavior. Yes, sex infuses everything in Ives’s world and he makes his case well.

However, after he reluctantly concedes to grant her a reading the tables are subtly turned on not only who is running the audition but on who defines the playwright’s deeper subconscious and psychosexual intentions. The general assumption is that a writer must know just exactly what he or she has written, but maybe that’s not always the case.

Director Joel Sass’s penetrating understanding of Ives’s insights clearly benefitted the Jungle productions. His two actors bravely and piercingly revealed ways in which emotions, hierarchy, and eroticism subconsciously influence or actions and desires. They were simultaneously sexy and substantive. (Maybe those two things aren’t necessarily opposite?) How many layers of emotion may be be operating within ourselves at any given time? To what degree are gender hierarchies and hierarchies in general, organically encoded and/or conditioned into us? How deeply and self-deceptively do we sublimate our erotic feelings and why do we do so v. why we think we do so?