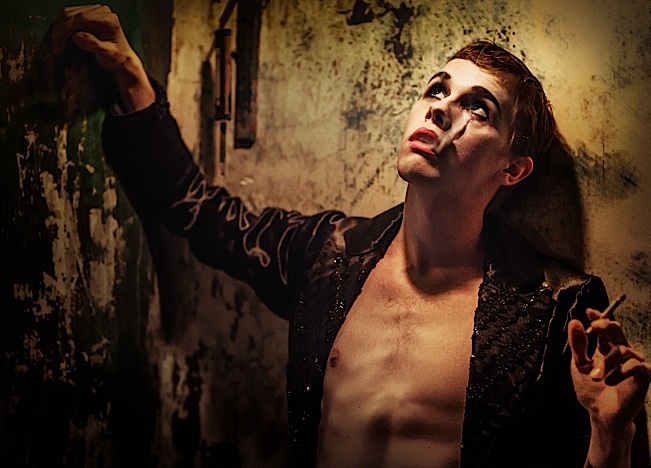 Tyler Michaels as the Emcee in Theater Latté Da and Hennepin Theater Trust’s production of “Cabaret”. Photo by Michal Daniel.

Masteroff, Kander and Ebb’s Cabaret has become an emblematic centerpiece of queer theater, as well as an iconic musical in general. Revisions made in 1998 have further solidified its queer credentials and Theater Latte Da revels in that at the Pantages. It’s the first local production of the 1998 re-imagined version of the 1966 original, so it’s fitting that the show is presented as part of Hennepin Theatre Trust’s annual Broadway Re-imagined slot. Director Peter Rothstein doesn’t shy away from the decadence of 1930s Berlin when the Nazis are waiting in the wings to cleanse the nation of its ‘filth’. Set designer Kate Sutton-Johnson and costume designer Rich Hamson glitz up the Kit Kat Club setting with a mix of glam, Vegas, and the Weimar Republic era in which the musical takes place. Denis Prosek’s vibrant orchestra gives the show’s famous tunes a party-hearty vivacity. You can understand why such wild excess could fuel an extreme right wing Nazi backlash.

Tyler Michaels as the club’s androgynous emcee is dangerously erotic. At the top of the show he rappels from the Pantages balcony, a lurid vision that welcomes the audience into a special dimension wherein Michael Matthew Ferrell’s choreography blends vaudevillian mischief with in-your-face sexuality and genderbending. Some of the club’s female dancers are actually men outfitted as gender-codified women. Many dance moves are bluntly raw – widely spread legs are a hallmark of this production’s style. One weak moment occurs, however, when all dancers on stage, go topless and we see swastikas on their pecs and breasts. Unfortunately, the audience isn’t given enough time to register just what they are seeing. It’s a bold choice that should have been relished by Ferrell and Rothstein. It also underscores the conflict that more savvy cabaret artists would have had, knowing that many of their hypocritical customers would be the ones brutalizing, arresting, and informing on them. Cabaret folk were on the front lines of those being carted off to the death camps. 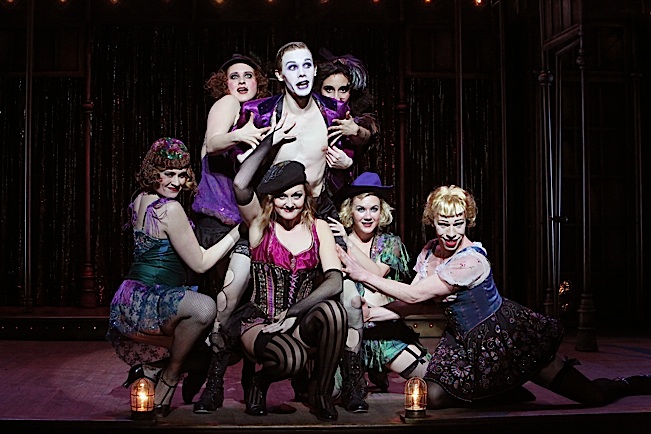 The stage version, unlike the 1972 film, includes a major romantic subplot between a Fraulein Schneider, a German boarding house owner and Herr Schulz, a Jewish grocer, both middle-aged. Sally Wingert and Jim Detmar give delicately wrenching performances. Of course, we know their love is doomed and we cringe with 80 years hindsight as Schulz take a ho-hum attitude about the way political regimes come and go. No big deal. The subplot is an exception to the rule in which most love stories in major plays tend to be about younger people.

A notable difference in this revised version is how protagonist Clifford Bradshaw’s homosexual side is elicited not by Ernst (Adam Qualls), the Nazi infiltrator he has naively fallen in with, but by a twink (Ed Williams) who saw him in a London gay bar. Sean Dooley brilliantly reveals a Clifford who struggles inwardly over his homo or bisexuality (it’s up for discussion) as he incrementally comes to realize both the Nazi Party’s rise to power and the cruelty of its proponents. There’s a lesson here for gay men who relish outing men who have done no gay folk any harm and publicly embarrassing/humiliating them. The twink is a Weimar equivalent of a self-serving party boi fixated on whether a man is gay or not. He has no empathy for Clifford’s struggle. He just seems to want to get into Clifford’s pants and he has no consciousness whatsoever of politics. 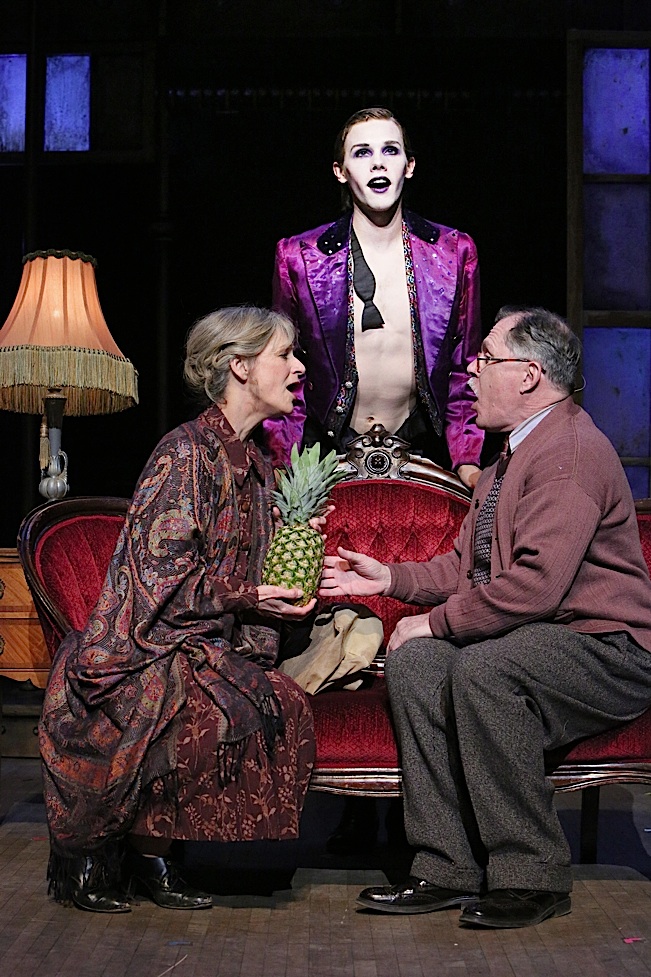 That unconsciousness is also a part of the musical’s main female character, Kit Kat singer, Sally Bowles. Kira Lace Hawkins brings flair, a fine voice, reckless abandon and a visceral sense of a woman who has abused her body and fails to realize that when you do that as a young person you are likely living on borrowed time until your well being finally collapses. This production really brings home the irritating way in which party types are oblivious to socio-politics – they don’t seem to realize they could never sew their oats if it weren’t for libertarian and liberal viewpoints holding sway. And of course, the Nazis, for all their behind-closed-doors and concentration camp sexual excess and savagery, were bent on the opposite of liberalism and libertarianism.

The production’s final scene needs to be thought out again – death camp symbol badges like yellow stars for Jews and pink triangles for gays, etc. would have made things much clearer. Nonetheless, Latte Da’s Cabaret is a dynamic work that captures the spirit of its original source material, Berlin Stories by Christopher Isherwood. If you’ve never seen it on stage, then you need to check it out. For all its queerness, it still appeals to a general audience. 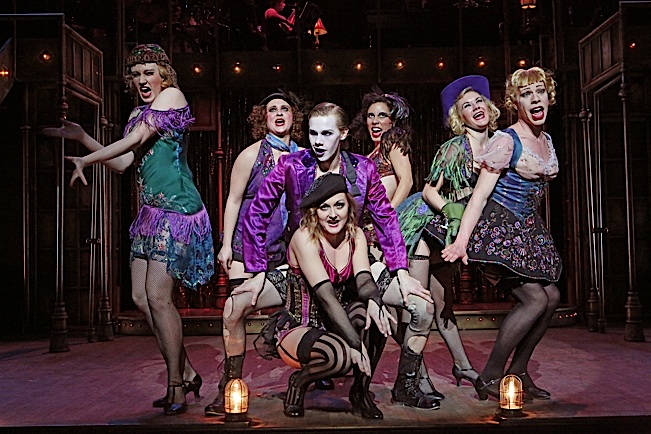 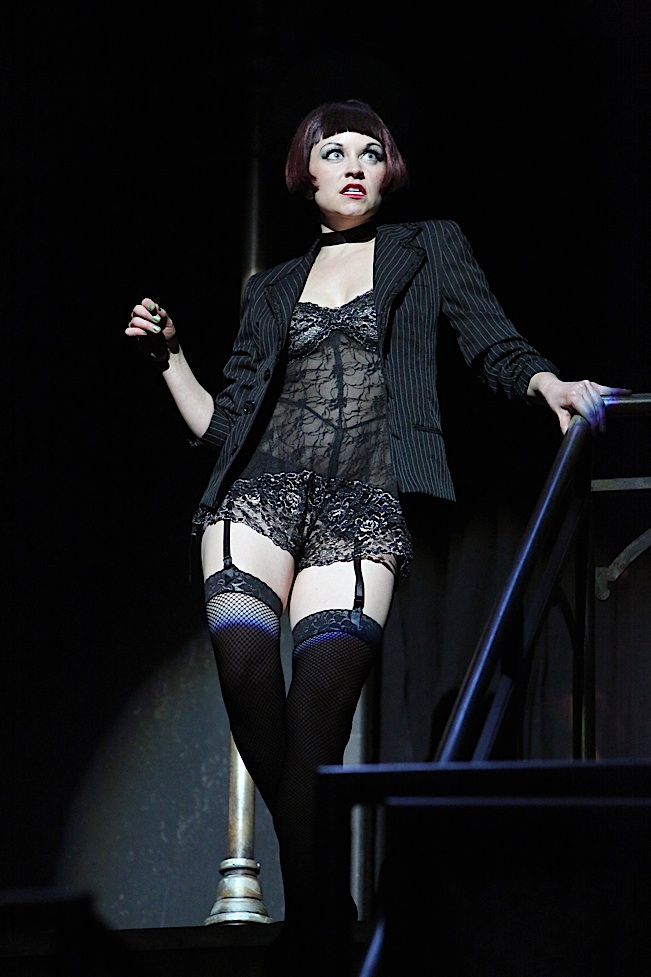