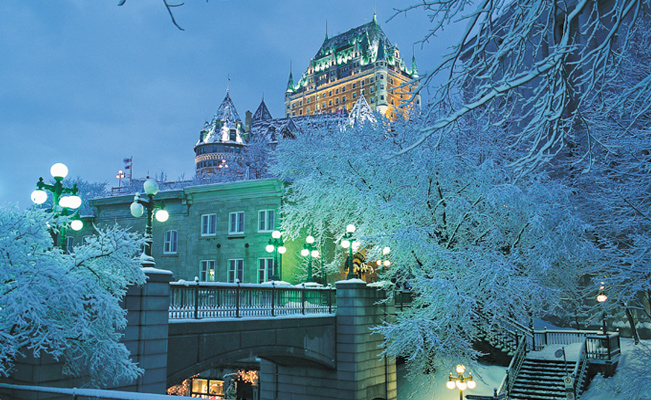 Would you rather live to eat, or eat to live?

Yeah, me too. That’s why we pinnacles of the evolved palate love French food, while Neanderthals gnaw bones. So I’m channeling Escoffier as I dine on foie gras, escargot, sweetbreads, Châteaubriand, macaroons—the Gold Standard of French cuisine. But—mon Dieu!—I’m not in Paris, I’m in Québec City—Paris without the price, or attitude.

I’m dining in Le Château Frontenac, in fact—the icon of the town. The fairytale hotel anchors the bluff above the river where explorer Samuel Champlain landed in 1608 to found what’s now called “the most European city in North America.” His statue salutes the Place d’Armes, mecca of Old Quebec, clad in venerable stone houses, shops, churches, while below—far, far below, as your shins will later testify—lies the Old Port, where fur traders first camped on the St. Lawrence, paying homage in pelts to Louis XIV, whose statue commands the 400-year-old Place Royale.

Patrolling its boutiques, we stop for hot chocolate and maple sugar candy. Then, scrubbed up, return for dinner at Restaurant Initiale, fit for a modern monarch—haute but far from haughty—to enjoy beet salad siding a mini saddle of rabbit, followed by duck flavored with clementines, smoked chestnuts and leeks; then a smooth, smooth chestnut cream perfumed with quince and saffron. 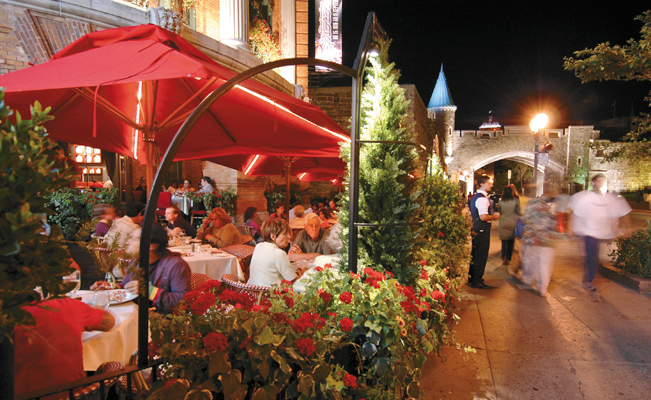 Next, a blast from the past that continues to delight diners in the here-and-now, Le Continental—a clubby café doing business for 55 years in a building of 1845, serving us foie gras (yes!!) followed by the house specialty, filet mignon grilled table-side, then, also fired right before our eyes, crêpe Suzette.

Then, a taste of tomorrow’s thinking in St-Roch—a neighborhood once lush with fine furriers and department stores, then fallen into dishabille and home to down-and-outers. Today, it’s revivified by avant artistes and foresighted entrepreneurs, such as young Mathieu Brisson, who trained in palaces of gastronomy. But in his sunny, modern bistro, he’s abandoned frou-frou and formality in favor of great food at great prices—what he calls “bistronomy”: dishes like creamy celery-parsnip soup painted with a golden splash of lobster oil, served with shrimp and lobster salad on tiny toasts; then duck confit or, even better, salmon tartare in pink grapefruit vinaigrette with beet-and-fennel salad. For dessert, a soft cheese of caramelized milk, served with maple syrup. Says Mathiew, “Québec is a community that cares about food.” He’s prepared to answer the call.

We walk off the meal along the avenue, breaking for a chocolatier, a tea salon, and yes, more food, at Les Bossus, for a taste of steak tartare by another chef/patron open to opportunity who took over a longtime neighborhood café. 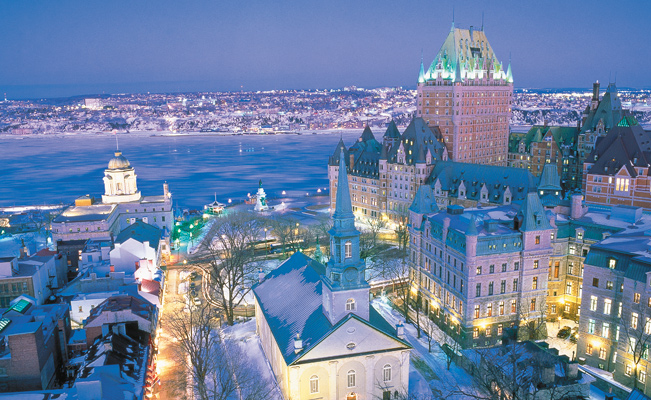 We set off the next day for another off-the-tour-bus quarter of the city, the working-class Faubourg Saint-Jean, with a scavenger hunt to fuel our lunch. Following assignments, we scoured the avenue’s many mom-and-pops for bread, cheese, olives, salad, chocolates, cookies, and my mission—pâtes and sausages, which I sleuthed among the locals at Épicerie Européenne, “the oldest grocery store in North America.” Then, macaroons in every rainbow hue at the newly-opened Biscuiterie Lady Kookie, as modern as tomorrow. We gathered for pot (or, sack) lunch at l’Église Saint-Jean-Baptiste of 1884, a gorgeous parish church.

Walking off the avoirdupois, I spent the afternoon at the Musée de la Civilisation, learning the story of Québec’s patchwork quilt of immigrants and of the land’s First Nations.

Then off to dinner at L’Hôtel-Musée Premières Nations, a stylish new enterprise of the Wendake (Huron) tribe, where Chef Martin Gagné melds his people’s time-honored hunting-gathering fare with plate presentations worthy of a gallery. Among our bounty: bonbons of smoked salmon; foie gras with haskap berries spread on bannock bread; squab glazed with molasses and birch syrup, served with cattail sauce; elk tartare with fir jelly; and crème brûlée with frozen maple crystals. Because we begged, the chef brought out tidbits of grilled seal, normally on another season’s menu: best meal of a week of best meals.

Wait! Here’s another. We spent our final day a few miles north on the Île d’Orléans, the agricultural Eden of Québec, where artisans produce wine, smoked fish, maple everything, apples to pick or purchase, and the reason God invented them at Ciderie Bilodeau, open for tastings of its famed sparkling ice cider, made from frozen apples—plus syrup, pies, jellies, mustard and chutney from the orchard.

Next, a pair of cheese makers who’ve rediscovered the recipe for the region’s oldest cheese—paillasan—a soft, mellow round that can be heated sans melting—like fondue without the tangles.

Then a maker of the red currant liqueur called cassis. Monsieur Monna brought the technique from his family’s French preserve; here at Monna & Filles, his two charming daughters offer tastes and hints for flavoring sangria, Champagne, or, for heaven’s sake, beer. 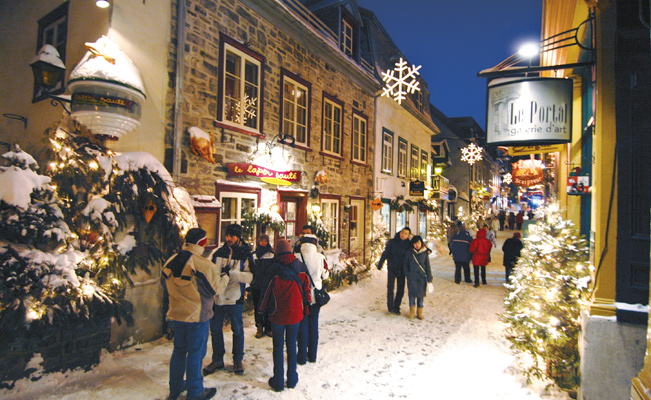 Then the moment I’d been waiting for, lunch at the Ferme au Goût d’Autrefois (Farm of Old-time Tastes), a 200-year-old farmhouse renovated as home-cum-restaurant by Jean Legros, also known (well, by me) as Father Goose for daddying his flock of geese until it’s time for foie gras—done here sans the force-feeding folks despise (“I’d rather shut down my farm than do that,” Jean declaims with passion). Instead, he breeds his birds to be very, very hungry. “Venez, venez! Mangez!” he calls–Come and eat, and do they ever. He grows all his veggies organically, substituting TLC for machinery.

We dined on rillettes of goose, duck and turkey, spread on bread he’s baked with goose fat (one word: yum!). On to smoked goose breast surrounded by farm veggies, then a cloud of maple mousse.

Gay Bars: Le Drague offers something for everyone, from country dancing and karaoke to drag shows and disco nights.