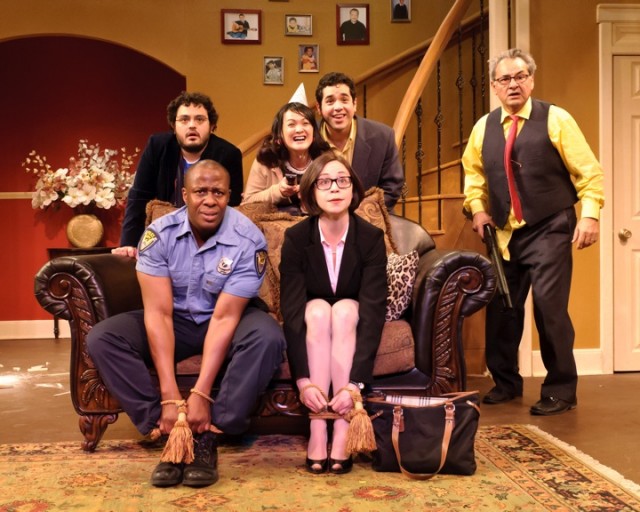 As a culture, like it or not, the now traditional sitcom is a vehicle which more people seem to understand and comprehend than any other entertainment vehicle. This ‘advent’ is further reinforced by the preponderance of stand up comics and others in the comedy industry with its corporate genuflectivity, who also like to try their hand at writing scripts. That’s the pool that playwright Josh Tobiessen has drenched himself in, so no need to worry that he has a philosophy degree from Grinnell. There’s nothing here to tax any kind of deeper thinking. His comedy Crashing the Party is all fun and games that make light of human suffering.

But wait! Maybe there’s more to this underneath what may be Tobiessen’s passive aggressive surface. To point: Crashing the Party goes multiculti with the sitcom form. White mother Catherine (Sally Wingert) enjoys her middle class status and volunteers for various good causes – something I suppose Tobiessen thinks is silly. But then I also suppose he gets a double whammy here because conservatives will balk at her attempts at social consciousness and certain liberals, and you know who you are, will paint her as a ‘liberal white woman’. Her Hispanic hubby, David (Joe Minjares), your typically out of touch middle aged ‘family man’ that sitcoms love to cram down our throats -or in this case, ‘crash’ down our throats’?- is involved in an embezzlement scandal unbeknownst to his idiotic white wife. One of their sons, Arthur (Rolando Martinez), is an ultimate slacker who dad has ‘Mr. Mooney’ed’ with endless carping about responsibility and getting a job. Arthur is hooked on electronics and the fact that he seems to live totally vicariously. And fear not, there’s no attempt even at examination of that very real problem. 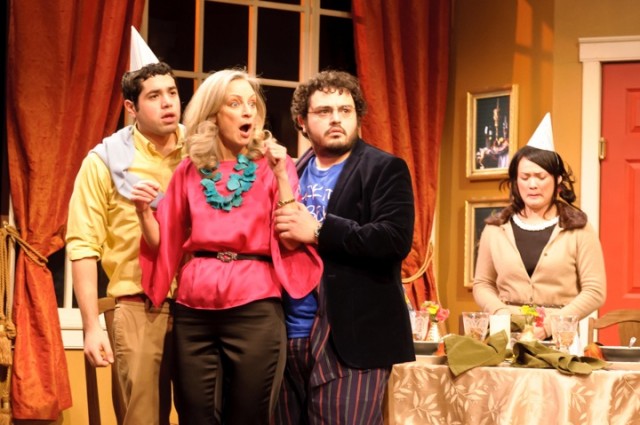 To round it all off, Grant (Mo Perry), an FBI agent, tazers at will. Perhaps Tobiessen doesn’t know that tazers are highly controversial and have been used unethically and illegally by law enforcement against persons, both white and of color, sometimes resulting in death. (Some would call it institutionalized murder). But nonetheless, this show’s tazer moments reeled in the laughs at the performance I attended. However, as obnoxiously butch as Agent Grant is, I suppose in light of some feminists now considering Michele Bachmann, Sarah Palin, and Margaret Thatcher to be feminists, that you can say that Tobiessen gives them cover.

Another female character, Eleanor (Laura Esposito), is a sexy, shapely whistleblower outraged at David’s embezzlement. Moira Sine Clinton’s costume makes her look like a clothed cartoon strip bimbo out of Playboy or Penthouse.

The show clocks in at 85 minutes with no intermission. Director Sarah Rasmussen has expertly co-ordinated the inanity in service of trivializing real problems. This is just the kind of think the guys at Patriot Radio will just love! It reinforces so many of their stereotypes. What’s not to like!