The Hoods of Columbus

Ohio’s capital city is a metropolis of two million, but, like the milk of its venerated Snowville Creamery, it’s not bland and flavorless; it’s separated into unique components — rich, tasty, diverse and distinct. Let’s amble through three of my favorites. 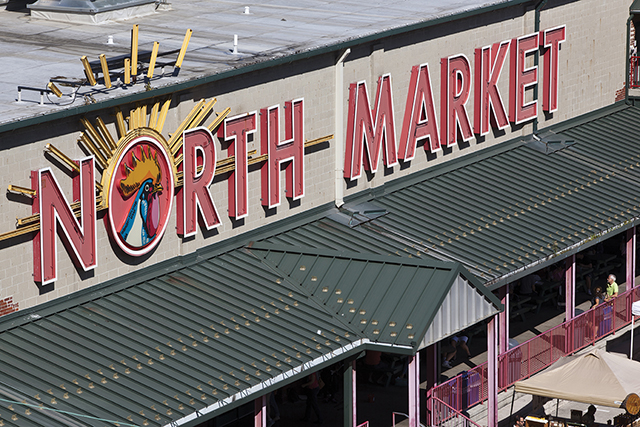 Short North
The name was once a police code for “Uh-oh: Trouble up there again.” Today it sparkles as the epicenter of cool, with trendy restaurants and boutiques of high design crowding this stretch of High Street. (Hop on and off the free CBUS circulator to ease your feet.)

Got art? You bet, starting with 19 curated murals brightening brick walls and 20 indie galleries, like Hammond Harkins, starring edgy contemporary works, and the Lindsay, champion of outsider art. The Pizzuti Collection is a mini-museum of ultra-contempo, often controversial, works; you’ll spot it by the larger-than-life metal sculpture of a dude pissing in the courtyard.

Boutiques of handmade jewelry and streetwear are all too frequent for the welfare of your wallet, but bargains also call your name at second-hand meccas such as gay-owned Out of the Closet and Flower Child, whose mid-mod dec and garments have gone home with the likes of Bette Midlar and Scarlett Johansson. Same for Mukha Custom Cosmetics, whose owner, Tim Maher, is queen of the insightful insult (“No more blue eye shadow for you, darlin’,” he instructed yours truly. “Just because you’ve done something for 20 years doesn’t make it right.”) Also on the receiving end: clients like Patti LaBelle, Hillary Clinton, and the Dixie Chicks.

When you feel peckish, patrol the 35 merchants in the 140-year-old North Market: pizza to pierogi, capped by Jeni’s Ice Cream, acknowledged as the best in Ohio, if not the universe. The district’s most rewarding restaurants begin with The Guild (ricotta gnocchi with fava beans, carrots and wild mushrooms; cavatelli in rabbit confit, garbanzos, sweet peas and asparagus; salmon with romanesco, raisins and cauliflower-caviar cream; and ribeye with white asparagus puree, wild mushrooms and duck pâté).

Wander over to the Hilton, where Chef Bill Glover wowed prissy New Yorkers at a James Beard dinner celebrating all things Ohio (as he did for us), like pork loin with purple asparagus, cauliflower-parsnip puree and Chioggia beets in miso pork juice, or strip loin paired with short rib bread pudding, Also featured were Thumbelina carrots, kale, turnips and garlic roots. A short hop away, Salt & Pine, the new kid on the block, fashions inventive plates like a soft egg with porcini cream; buttered crab partnered with a cured egg yolk, “almost burnt” cream, red mustard greens and Meyer lemon; and country-fried quail with kefir cornbread, chestnut gravy, currant jam and braised greens.

Franklinton
If a ’hood is called The Bottoms, you’ve nowhere to go but up. This once-sketchy stretch of town is on the cusp of gentrification, led by a 140-member artists’ co-op housed in a rehabbed warehouse called 400 West Rich Street. It’s also home to Movement Activities, an innocent-sounding moniker for trapeze work (come to watch or learn) started by former NYC dancer Mike Thomas, who also offer classes in yoga and fitness for scaredy-cats like me.

Lots of artists’ studios to peruse there, also, plus an idea-generator called Steam Factory and the brilliant Idea Factory, part of the trendy Maker Movement that offers classes and then tool-renting-cum-workspace in crafts like blacksmithing, jewelry making, electronics (3D printing), welding (where we fashioned our very own horseshoe coat hooks), and woodworking, aka anger therapy. To turn raw lumber into that fashionable faux-distressed look, we flung hammers and other torture instruments, then manhandled a blowtorch. (Or, as our instructor daintily put it, “Kick the shit out of it, then burn the crap out of it.”) Date Night drop-in sessions monthly, too.

Then head next door to Land Grant Brewery for a well-deserved reward. And grab a bite at Strongwater, with fun food like fried green tomatoes with fried egg; pork belly tacos; Nashville hot chicken; or pesto mac and cheese. 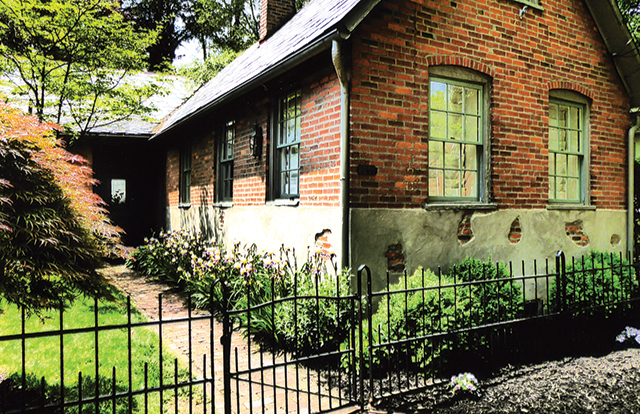 German Village
In 1814 immigrants began flooding the brand-new capital city of the brand-new state of Ohio. By 1865, one-third of the city’s population was German — sturdy folks who built neat brick homes topped with roofs of slate and girdled with black wrought-iron fences. The area boasted four breweries, German schools and churches, newspapers and social clubs — until 1914, when Germany was now The Enemy — books burned, streets re-named. The neighborhood sunk into decay until, in the ’60s, foresighted folks began buying up the cheap properties and rehabbing them with TLC. Today, forget it: prices are sky-high. But you can ogle. Pick up a map at the Visitors Center on Third Street for a self-guided walking tour.

I did spot a lonely Starbucks, but it’s the only chain in the entire 233-acre Village. Instead, stop in at Caterina for European housewares; Pistachio Vera for french macarons (apricot-ginger, anyone?) and elegant pastries; Kittie’s Handcrafted Cakes (white lavender and/or PBJ cupcakes). Explore the eight-room treasure trove of elite American crafts at Helen Winnemore’s (don’t miss the stacks of drawers harboring fine jewelry), and The Book Loft, with winding staircases connecting 32 rambling rooms (pick up a map or you’ll never be seen again); open until 11 p.m. daily. Stroll the perimeter of Schiller Park, named for the poet whose statue it centers, all fragrant with mock orange and iris.

Then, where to dine? Easy. Katzinger’s Deli, since 1984 serving Old World Jewish specialties like knishes, latkes, blintzes, chopped liver, and humongous corned beef sandwiches, along with crisp pickles from serve-yourself barrels. Or brats at Schmidt’s Sausage Haus. Prefer tapas or paella? Then Barcelona’s your spot. Its chilly gazpacho hit the spot, as did fried soft shell crab with avocado salad, and stacks of crispy pork belly skewered with shrimp and grilled cipollini onions aside fennel salad. Or the plate of mussels, shrimp and clams accented with bacon and sundried tomatoes. At G. Michael’s, housed in a former stable, the grilled asparagus starter is sublime. So’s the duck liver pâté. And the wild mushroom gratin. And the shrimp and grits with country ham and sausage.

Visit www.experiencecolumbus.com, where the site also offers LGBT info and newsletter. Pick up the free pub Outlook for venues and events, too. 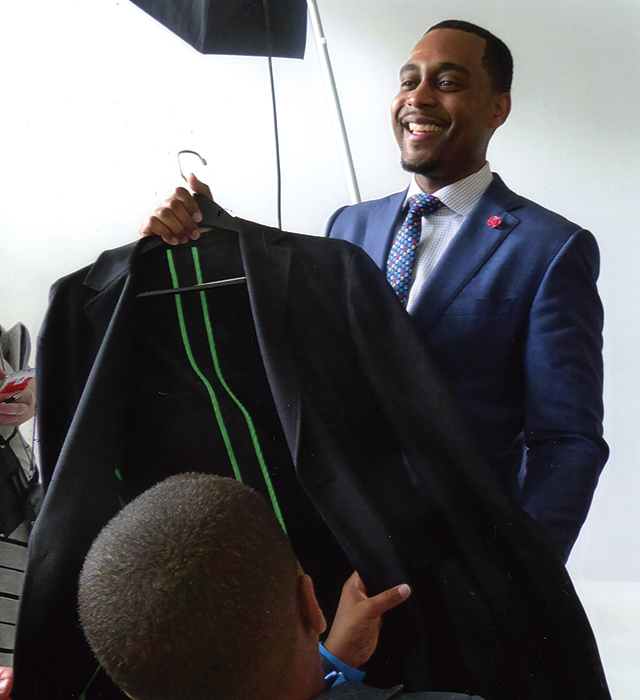 Columbus is all about clothes.

The city is the third-largest mecca for fashion design in the U.S.A. (following New York and Los Angeles), home to such major brands as The Limited, Victoria’s Secret, Abercrombie & Fitch, Bath & Body Works, Human, Express, DSW, and more. Its College of Art & Design spawns a slice of this top talent. Others move here from both coasts, as did Celeste Malvar-Stewart. “In Columbus, people are open to new ideas, so you can move forward,” she says. “Haute couture here is at the boiling stage, so I can’t wait to see what will happen.” While waiting, she creates high-end women’s wear, often using wool from nearby sheep (with whom she’s on a first-name basis) and dyes from onion skins, black walnuts, and iron, for a rusty aura. Make your own silk-and-lambs’-wool scarf in a workshop session.

Gary Jones declares, “I always wore suits to church and school, so they called me Mr. Jones: I got people’s respect and attention.” It led him to apprentice with a tailor to learn how to design and craft his garment of choice. Jones opened his own bespoke shop, Jones Select, eight years ago and now sells his suits ($1,000–$5,000) to NFL athletes and more. “I’ve always been in the forefront, defining the look: a clean appeal, neat patterns, clear but strong. ‘Stand out or fit in,’ I was told, and I prefer to stand out.”