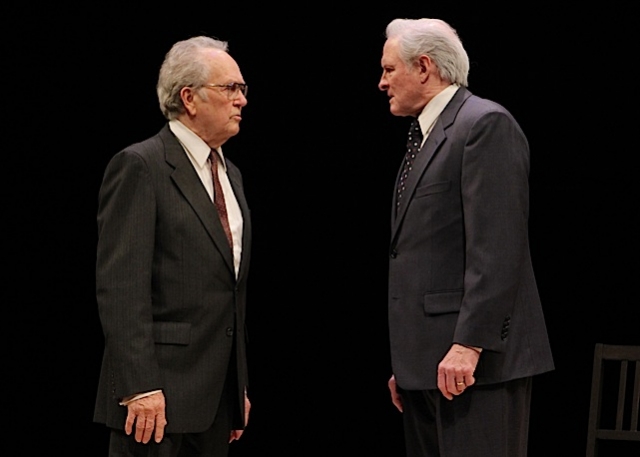 Warren Burger and Harry A. Blackmun grew up in St. Paul’s humble Dayton’s Bluff neighborhood. Burger studied law at St. Paul College of Law, now known as William Mitchell College, and Blackmun went to Harvard. Both were Republicans and were very close friends well into adulthood. In 1969, President Richard Nixon nominated Burger to be Supreme Court Chief Justice and he was confirmed.  A year later, Blackmun was confirmed as one of the twelve sitting Supreme Court Justices. The conservative pair were dubbed The Minnesota Twins. Blackmun lives in both glory and  infamy as the Justice who wrote the opinion for Roe v. Wade, the historic case which expanded women’s right to an abortion. Burger was on the opposite side.

Playwright Lee Blessing has clearly shaped his play, Courting Harry, now on stage at the History Theatre, with a predisposition favoring Blackmun and disdaining Burger. Blessing is clearly pro-choice, legitimately concerned about privacy rights and government intrusion, and is sold on the idea that the US Constitution is an evolving document whose applications will naturally change with time rather than a strict ‘constructionist’, fundamentalist interpretation. Full disclosure: so am I. Blessing and I sit at the same table on these counts.

Blessing puts these views forward with the blunt clarity of a good populist stump speaker. From a playwriting perspective it’s not quite agitprop and it cannot decide whether or not it’s polemical satire. Nonetheless, Courting Harry is definitely partisan and not a serious exploration of the relationship between the two men. Whether I like it or not, or whether Blessing likes it or not, principled conservatives and even some liberals, have held and hold pro-life views. But Blessing never gives them an airing. He has written Burger as a grumpy caricature. He doesn’t demonize Burger, he trivializes him.

At certain points Burger brings up the rights of a husband in a wife’s abortion decision. At the performance I attended those parts were actually met with some groans as if such thoughts shouldn’t even be brought up. But Burger’s concern is dismissed utterly by the playwright. Like it or not, it would seem that concern could merit a scene. But Blessing lacks the fairness, and perhaps emotional courage, to take us into that discussion. 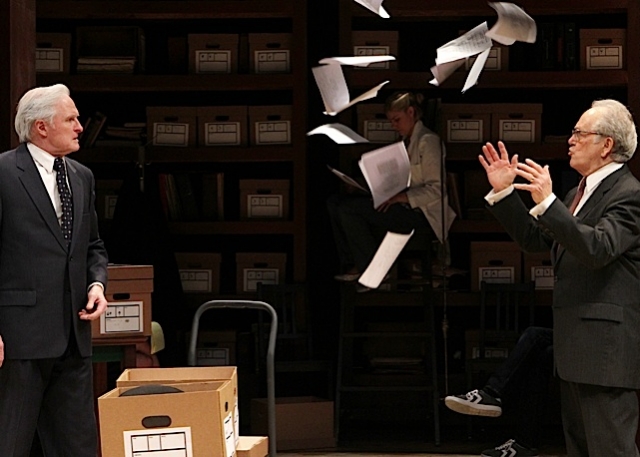 In reality, one of the hottest disagreements between the two had to do with homosexual sodomy in Bowers vs. Hardwick. Burger was ferociously homophobic in his written views on the subject and Blackmun was at serious odds with him over it. This is not explored in the play.

Moreover, the play is essentially disinterested in any other issues the two men cared about either mutually or respectively. There is no examination of how Nixon’s misconduct in Watergate and the secret bombing of Cambodia and Ford’s pardoning of Nixon affected them. Indeed, those three things brought embarrassment, shame and disrepute on Republicans and conservatives and caused considerable soul-searching among many of them for a time. To what degree did Nixonian politics disillusion the pair? 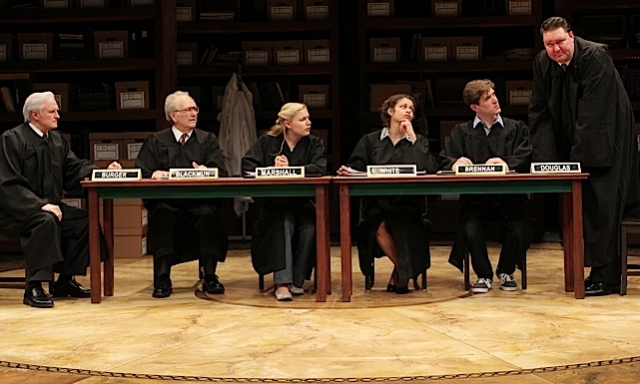 Unfortunately, Nixon, Clinton, relatives, and the other Supreme Court Justices are reduced by Blessing to mere comic stick figures. All are ably portrayed and director Joel Sass keeps the show clipping along with zest. Nathaniel Fuller as Burger and Clyde Lund as Blackmun, like Sass, do their best but they cannot be expected to rescue the script from the annoying curmudgeon vs. the fuddy-duddy dynamic that Blessing has built in.

How sad that the playwright who found such sweetness in his comedy Nice People Dancing to Good Country Music wrote Courting Harry with such smugness. Granted, some argue that that play is insensitive to sufferers of Tourette Syndrome, though I would submit that that is debatable. Moreover, Blessing’s drama, Independence, was on Lavender’s 10 Best Productions list of last year. Produced by Theatre in the Round Players, Jean Wolff was named Lavender’s Best Dramatic Actress for her magnificent portrayal of an extremely conservative mother. In fact, the role is somewhat monstrous. Indeed, great plays, like Independence, often have monstrous characters but they are masterfully written beyond caricature and compel us to understand why that monstrousness came into being. In the classic dark film comedy, Network, Faye Dunaway’s portrayal of the ambitious Diana Christensen is clearly that and is written and portrayed as if she is soul-less. But we are moved to examine our selves and our society’s relationship to media in a deeper way, thanks to such brave writing and acting. It leaves us concerned, not smugly reinforced. Chris Cooper’s homophobic Colonel Fitts in the film comedy American Beauty is hilariously dangerous and ultimately tragic. In the late feminist playwright Wendy Wasserstein’s, Third, which was worthy of both the Pulitzer and the Tony, she turns the tables on feminist self-righteousness so that protagonist, Laurie Jameson, whose views liberals might well generally agree with is made to face how alienating her style and conclusions have been not only to those who disagree with her politics but even with those who agree with them. Paradoxically, though one typically will not walk out of a performance of Third and register Republican, the thoughtful audience member will quite possibly take stock of how feminists can more effectively and compassionately present their views. 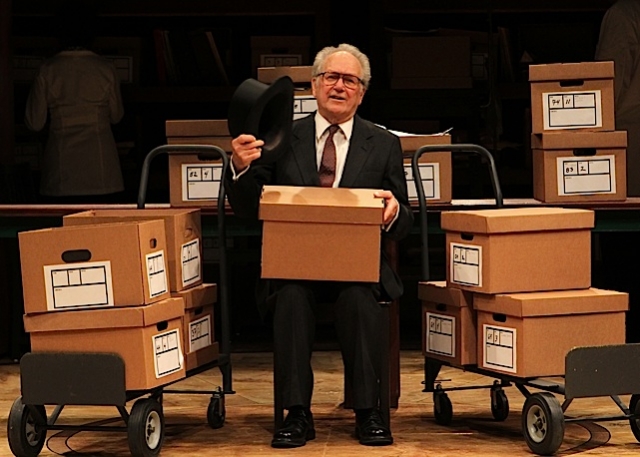 In sum, it’s totally fine and soulful to pick a side in political playwriting, and if a character emerges who is profoundly, organically negative, then that can make and often has made for great theater and film. And if it’s agitprop or harsh satire -and Courting Harry doesn’t really count as either- then we’re in different realms/genres that can actually sustain two-dimensional characters. With agitprop and satire you are being up front with where you’re coming from and whether it’s effective or not will be decided on different terms. 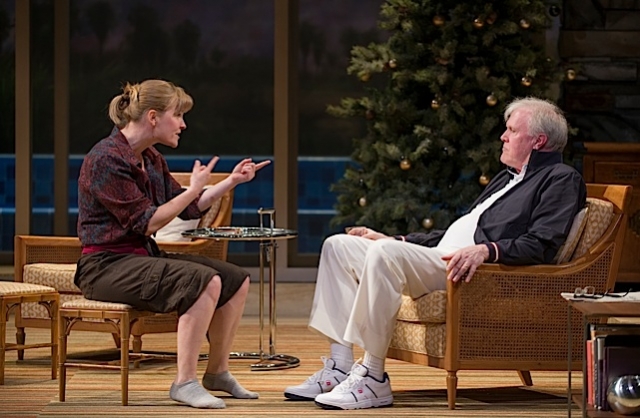 Shimmering in splendid contrast to Courting Harry is Other Desert Cities at the Guthrie – a political play that doesn’t let either side off the hook. Playwright Jon Robin Baitz is deeply committed to questing for the truth of a situation. Sally Wingert and David Anthony Brinkley give Tony-caliber performances as Polly and Lyman Wyeth, a retired California GOP power couple retired to Palm Springs. When daughter Brooke (a terrific Kelly McAndrew) visits from the east coast, she brings her memoir manuscript that addresses her view of the life and suicide of her older left-wing activist brother and causes an uproar. Director Peter Rothstein has wisely and intuitively guided Baitz’s masterfully written drama so that one is never quite sure which side is closer to legitimacy. It may or may not shift your political views but honest liberals are made to reckon with the compelling reasons the Wyeths have come to their conclusions and honest conservatives are compelled to see the legitimacy in Brooke’s conclusions. Michelle Barber shines as Polly’s boozy liberal sister, Silda, and Christian Conn gives a touching performance as Brooke’s younger brother Trip, a young man caught in the middle.