Of the many Twin Cities Pride Celebration activities, events, and private parties, Socially Savvy’s 2011 Pride Pick goes to Kim and Christy Taylor. Raising the tailgating party to a new level, they have moved their pop-up camper trailer to a well-trafficked location on the Hennepin Avenue parade route for the last five years. This party was inspired initially by the need for clean, available restrooms during an understandably messy weekend. After tailgating for a few years with friends, the Taylors thought, “Why not bring the camper?” An early arrival the morning of Pride guarantees their spot for the final festivities of the weekend. 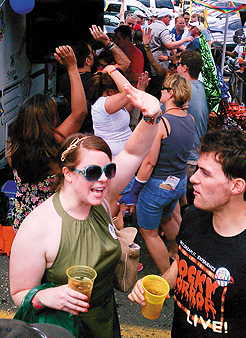 Hosting a party in a camper has its challenges, especially in terms of space. Equipped with a large awning, enough chairs for a crowd, folding tables and a plethora of icy coolers, the camper becomes home base for a wide variety of faces—the Taylors’ friends and friends of those friends. The key players are from their bowling team, a motley crew of folks dedicated to good times. The team uses the winnings from bowling tournaments to fund the party each year. When that isn’t enough, generous donations come in from the attendees, too.

News of the party made it to Facebook this year, and that meant the crowd was the largest yet—so large that volunteers had to play security guards for the day. “It just keeps getting bigger and bigger” says Kim, “but everyone is very helpful, cleaning up and keeping the party going.”

Kim, Christy, and their party-planning friend Scott Paine take decorations seriously, festooning the camper and the surrounding area with brightly colored rainbow streamers, flags, and even a disco ball. A bathroom attendant (to collect donations for the party and maintain the VIP guest list) and a loud sound system sparked up instant dances with a spicy party mix that would be the envy of any downtown club.

• The guest list is word of mouth, like a speakeasy. It’s all about knowing the right people.

• The location on Hennepin Avenue was a perfect spot between the crushing crowds and the busy bars. In years past, the parking lot attendant adamantly opposed the tailgate party. This year, he simply smiled and nodded, saying “Happy Pride.”

• The food was obviously grill-oriented. A selection of grilled items, chips and cold party platters brought by guests fed many a Pride brethren. Sticking to a few basics and relying on a potluck from the guests ensured that everyone had enough to eat. An early morning breakfast after setting up also keeps everyone fueled for the day.

•  Drinks were bright in flavor and color: punch with colored paper umbrellas. There was also plenty of beer on hand to keep guests quenched.

• The entertainment was the Pride Parade, itself. When the action lulled (think corporate banking floats), booming house music made everyone jump up and dance. Kim and Christy, as well as their friends, put together the mixes.

Brandy Slush Cocktail
This tasty cocktail was served at the party. It takes a day to prep, but it’s worth the wait.

Directions
Heat 5 cups of water to a boil in a large cooking pot. Stir in sugar until it has dissolved. Let the mixture cool for 30 minutes or more.
Stir in lemonade concentrate, orange juice concentrate, and brandy. Pour into a large plastic storage container or 5-quart ice cream bucket. Place in the freezer to cool (about 4 hours), stirring every 30 minutes. Keep stirring occasionally until frozen to ensure the brandy does not separate from the mixture.
To serve, remove from the freezer and let soften for 10 minutes. Using an ice cream scoop, portion the slush into glasses and top with soda or ginger ale. Enjoy on a hot afternoon.