“Sweet Land” — A Minnesota Musical Gem at the History Theatre 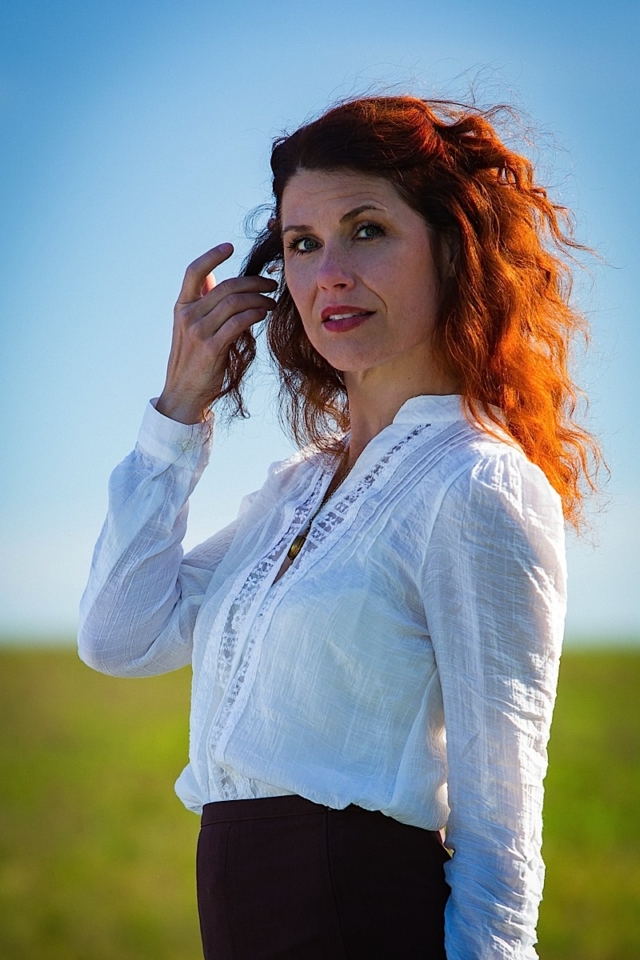 You may know Sweet Land as the Ali Selim 2005 film and/or the Will Weaver short story it draws from. If you do, then you know it is a compelling work about a German immigrant who comes to Minnesota soon after World War I with the expectation of marrying a man she has never met. The Scandinavian Americans in her new town are grooved into rigid ways that lend to suffocating community attitudes and standards. Book writers of the musical version, Perrin Post and Laurie Flanigan Hegge, and composer Dina Maccabee have adapted the story into a powerful new work with lyrics by Hegge. Post has lovingly directed the premiere production at St. Paul’s History Theatre.

The great Ann Michels speaks much of the protagonist role of Inge in German and as usual, her vocals are touching, strong, and terrific. The actor takes a while to warm up to the role of Olaf, the man she expected to marry her. During the first half Berdahl gets stuck in the extreme stoicism of his character so that it is difficult to feel much sympathy or empathy for him, though Post and Hegge’s book for the musical illuminates the man well. Berdahl has yet to find moments wherein we sense the underlying anguish of a man straitjacketed in his socio-gender role. In the second half he does break through, however.

An electrifying Michael Gruber is viscerally judgmental as a Lutheran pastor whose puritanical ways are reminiscent of another similar figure in a Scandinavian film masterpiece, Ingmar Bergman’s Fanny and Alexander. Ironically and delightfully, in the spirit of Martin Luther, Inge calls forth her right to have a personal relationship with God. This is one of the musical’s various moving undercurrents. You may want to cheer her on!

The formidable Gruber is vibrantly contrasted by Jon Andrew Hegge and Tina Moulder as an earthy married couple facing farm foreclosure. Both of these winning performances remind us that the stereotype of Scandinavians as cold and unexpressed, is certainly that: a stereotype. Hegge and Moulder ignite a marvelous chemistry.

This musical may remind some of the little village of Anatevka in Fiddler on the Roof. Sweet Land also reflects an agrarian community in a specific space and time where the forces of stern oppression intimidate the little person trying to find their niche. This is clearly part of the musical’s shape, formed by contrasts between those poles.

For another example: the muscular performances by James Ramlet as a chilling Social Darwinist banker and Jason Hansen as a socialist activist who calls him out to delicious effect. Moreover, these contrasting poles that Sweet Land traffics in are skillfully lifted beyond stereotypes. We still feel somewhat for the negative characters trapped in their identities. It’s as if the understandable need for maintaining social order in some ways has gone too far.

The unique mix of blunt truth and creamy nostalgia, comparable to Fiddler on the Roof and Oklahoma!, make this smaller scale musical something truly special. So often when those two qualities exist in a single work, one cancels out the other. This owes much to Maccabee’s often transcendent score, obliquely and soulfully reminiscent of Aaron Copland and Jerome Moross. The show glistens with memorable, hummable tunes that seem to correspond with the land itself. Not to mention Erica Zaffarano’s set, at once picturesque, as well as expansive in that awesome way the Upper Midwest countryside actually is. Joe Chvala’s rustic folk choreography, Hansen’s spirited music direction and musicians, and all vocals are in splendid synch with Post’s splendid overall vision.

Note: Sweet Land rates along with Only in America as a remarkable film about the Minnesota historical experience. Both films have a mix of Twin Cities actors and other professionals from beyond here.