You know there’s art in South Dakota, of course you do; the monumental sculptures of Mount Rushmore and Crazy Horse are high on many a traveler’s bucket list, and rightly so. But the artworks along I-29, the north-south “cultural corridor” that’s just a palette’s throw from the Minnesota border, takes far fewer vacay days and time behind the windshield. Here’s the payoff. 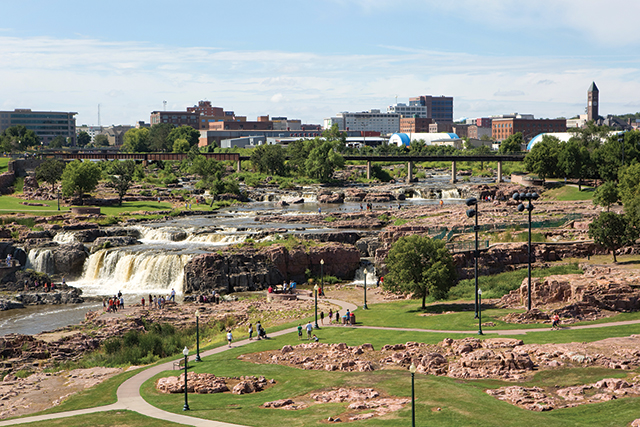 Aim for Sioux Falls, the state’s largest city, anchored by its namesake Falls Park, where three rambunctious waterfalls tumble over the sparkling pink quartzite stone that serves as the city’s signature building block. Kids and ducks paddle in the waterways below the observation tower and picnic-ready Falls Overlook Cafe, a stop for the town’s summertime trolleys.

Then scope out Washington Pavilion of Arts and Science, a repurposed high school, offering a three-fer arts immersion: a hands-on science center currently celebrating outer space (complete with space toilet); art galleries, where I was electrified by an exhibition of contemporary Native American talent; and the South Dakota Rock and Roll Music Association and performance hall where Joan Rivers and the South Dakota Symphony Orchestra are among the featured acts.

Trot next to the gleaming quartzite courthouse of the 1800s. Today it hosts a history museum whose galleries gallivant from exhibits reliving Fort Dakota of 1869 to the paintings of George Catlin, the painters’ painter of Lakota life. The Purse-onality exhibit showcases, decade by decade, “the one accessory that can make or break your outfit,” evolving from ladies’ reticules holding dainty pistols to one’s “alter ego accessory” with lust-worthy examples by bold-name designers Prada, Gucci, and Chanel. Don’t miss the museum’s mascot, a stuffed buffalo utilized nose-to-tail (and scrotum) by the Lakotas — “the Wal-Mart of the Plains Indians.” 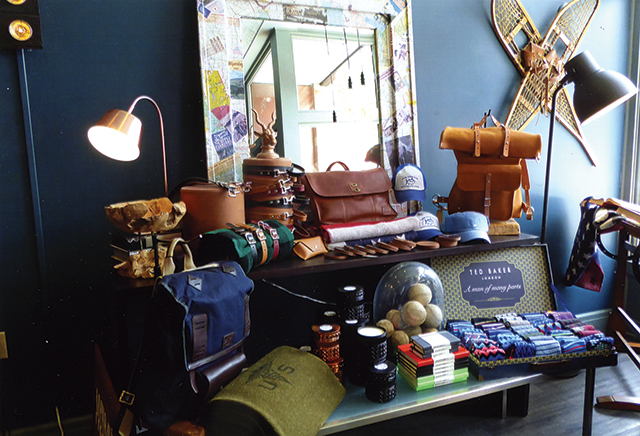 Finish the night at Club David, the ultimate gay bar, with rooftop patio, drag show, DJ, dance floor, and pool table. Or drive to Fernson Brewing Company to tour and taste (think barrel-aged farmhouse ale). Fliers should check out the Euro-style AeroStay Hotel (rooms = tiny and design-y) which is ultra-convenient, with private entrance to the airport terminal.

But don’t leave yet! Scoot north on I-29 about 100 miles to Watertown, where the magnet is the Redlin Art Center, a massive Gone With the Wind-meets-college-dorm structure luring 150,000 visitors a year (free admission) to view close to 200 works by the homeboy “master of memories” painter: ducks at sunset and forest cabins among the nostalgia. Terry Redlin, at 16, enrolled in art school in St. Paul and later illustrated playing cards for Brown & Bigelow, the art division of Webb Publishing. Several scenes of Lake Minnetonka grace the center’s walls. 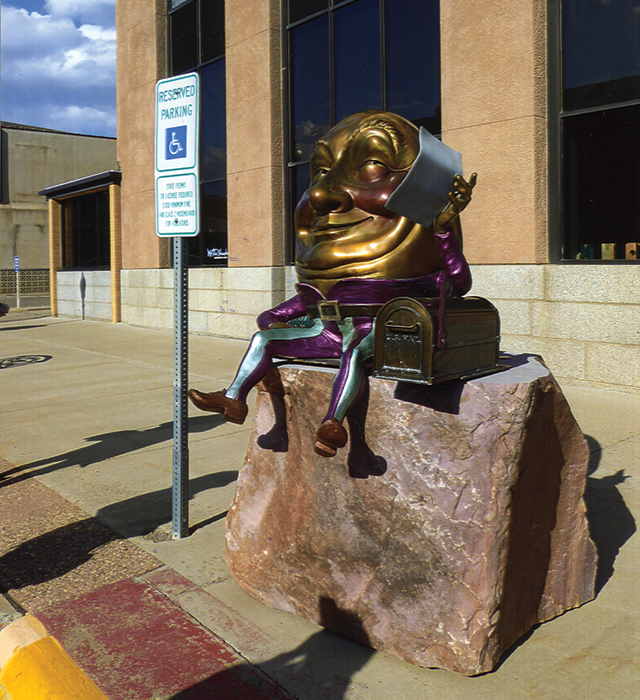 Head back south for 50 miles to Brookings, home of South Dakota State University, which helps make this a small town with big art. The art museum currently showcases Lakota Emergence (through Oct. 17), melding dynamic contemporary works with historic treasures. Peek also at the Marghab linen collection of complex embroidery created in a Portuguese Madeira enterprise owned by a Watertown woman.

Nearby, the children’s museum is — trust this jaded traveler — the best of its kind, freeing kids (of all ages) from instructions. “Just try it out!” urges marketing director Randy Grimsley as we explore an auto mechanic’s station, a splash room, milk a “cow,” collect “chicken” eggs and harvest “vegetables.” Outside, quake your heart out as a lifesize T. rex roars and rumbles.

Lower that heartbeat at McCrory Gardens, a botanical gardens and arboretum, brightening 70 acres with vibrant native blooms. For a peek at the practical side of planting, stop at the South Dakota State Agricultural Heritage Museum to delve into the ‘whys’ behind the facts of farm life and sheep herding.

Brookings’ compact downtown is home to four (and counting) arresting murals, covering brick walls with scenes of South Dakota history. But the sun is setting, so it’s time to wet your whistle, and the place calling your name is Wooden Legs Brewing Company, where you’re wise to summon a flight and side of pizza. The daring (or crazed college kid) will then meander to Jim’s Tap, where, amid dusty medieval swords and timbers, the drink to order is the Backpacker (lime vodka, 7-Up, and OJ). Best hangover cure: breakfast at Cook’s Kitchen, frying up diner fare since 1947.

Now steer the car further south for 120 miles to Vermillion, home of University of South Dakota, whose pretty campus invites a stroll and peek into Historic Old Main’s gallery, devoted to Native artist Oscar Howe. But the big draw — a destination drive — is the campus’s National Music Museum, a priceless collection of the greatest musical instruments in history. As the highway ads promise, “Sax Appeal.” 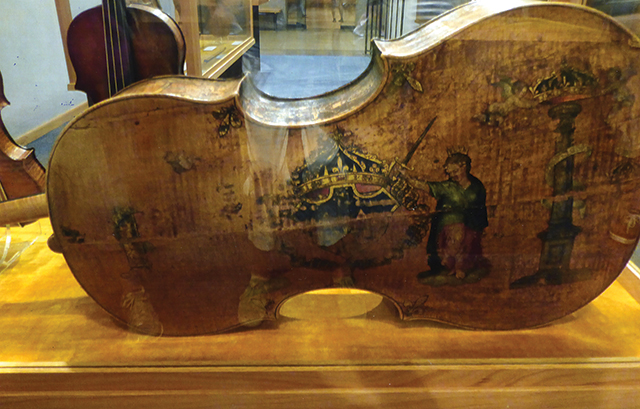 That saxophone is the very one invented by Adolphe Sax in the 1850s. Peer also at his impossible-to-play seven-valve trombone. Ogle the world’s oldest cello (the Amati-made instrument of the mid-1500s) and earliest harpsichord (ca. 1530); the extinct, banjo-like cittern, circa 1579; exotic 17th-century ebony and ivory guitars; and a harp-guitar (the jackalope of instruments). There’s a 16th-century cornetto stolen from the Rothschilds by the Nazis; the snare drum of King George I; a room-size Indonesian gamelan; the harmonica and accordion rooms.

Trace the history of the pre-piano keyboards, the show-off household instrument, likened to the status of cars of today. But the most awe-inspiring is “one of the finest collections of Renaissance stringed instruments in the world” with violins by the Amati family of Cremona, owned by royalty, and those of Amati peer, Antonio Stradivari. Modern treasures too: guitars of B.B. King, Elvis, Johnny Cash, Bob Dylan, Muddy Waters. And Bill Clinton’s sax.

After feasting your eyes, how about something tasty for your palate? Café Brulé delivers extraordinary coffee drinks plus lunch-ables like shrimp tacos and SLT sandwiches (think salmon) and a side of — remember these words — potatoes brulé, rich and creamy. Return to breakfast for their famous waffles or Benedicts.

Fans of red meat, head directly to The Red Steakhouse, a Fort Knox of steaks and prime rib housed in a former bank. Under the gaze of a buffalo head and painting of Clint Eastwood, we started with duck tacos and beet and orange salad, and succumbed to sides of creamed spinach, mac and cheese, and such. Doggie bags are mandatory. So is a visit to nearby Valiant Vineyards Winery for a taste of best-seller Wild Grape, Turkey Ridge Creek, and vodka made from (huh?) grapes.