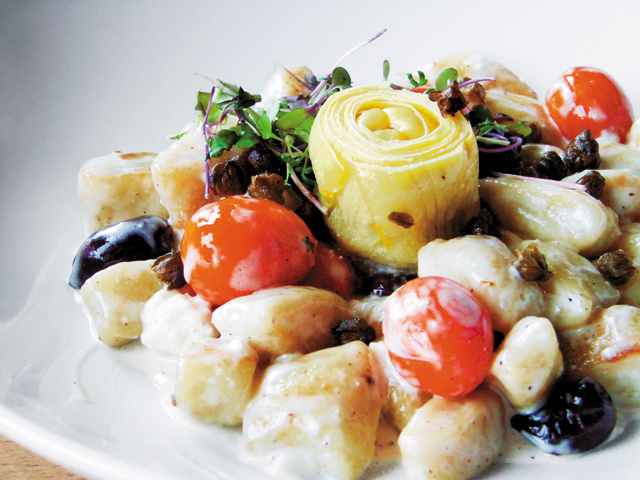 There is a specific shade of slate blue-gray that Lake Superior turns just before the sky opens up and unleashes its unpredictable torrents.  The waves crash against rocks turning them a slick onyx.  When the sun comes out, the water brightens and dances a scintillating azure color. The sky is dotted with white gulls while speckled loons dive into the arctic depths in search of a little lunch. No matter the season, the lake seems to live and breathe; it’s mesmerizing. Driving along the edge of the lake from Duluth toward Two Harbors, it’s easy to get a neck cramp, craning to see all the natural beauty this part of the state.

The place to stop to find the food whose beauty matches that of the surrounding is always the New Scenic Café. Although it isn’t entirely new anymore, fast approaching their fifteenth year in business, they have been changing diners’ expectations of what a northern café dining experience can be. 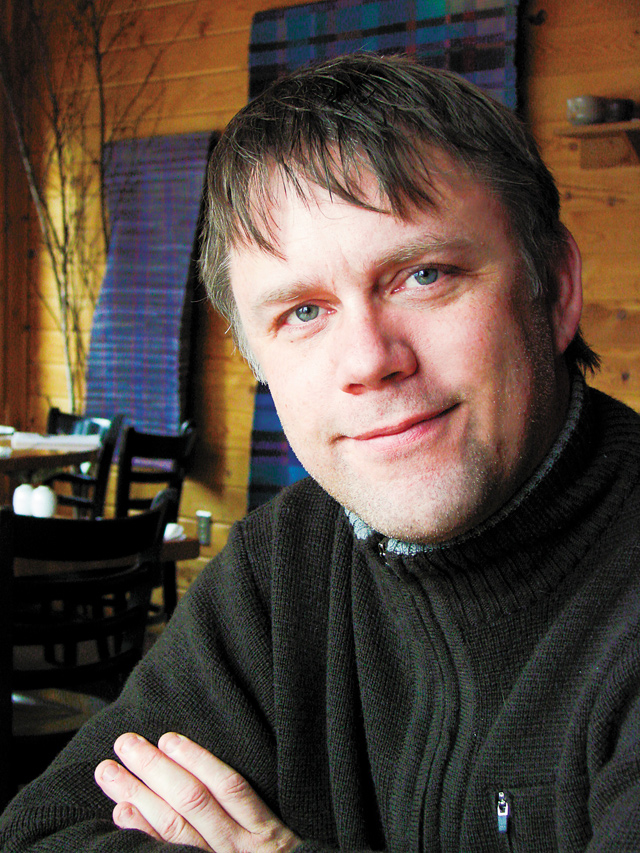 Chef and Owner, Scott Graden, who is celebrating 15 years of New Scenic Café.

On an icy day in January, I sat down to chat with the owner and visionary, Scott Graden. What I first noticed were his hands, calloused and strong, delivering a warm, firm handshake. In addition to building the ever-changing, seasonal menu, Scott built much of the building himself. He had also more recently built a yurt sitting outside.  A round, domed structure, he and a friend had put it together hoping that, in the warmer months, it will act as an extension of their outdoor space.  More metaphorically, Graden has also built a collective of local sources for food, not something that anyone was doing back when he first opened the doors at the New Scenic.  When possible, they buy from local producers, but the menu isn’t strictly local.

The design of the restaurant is full of clean Scandinavian-style lines with warm, wood-paneled walls.  The food is also simple, clean, and extraordinary.

A rotating appetizer special of tuna sashimi taco, tucked into a crispy shell, topped with creamy avocado, and doused with a little soy sauce is unearthly; so heavenly light and loaded with flavor. Followed by a bite of their house-made pickled ginger, it’s delightful. 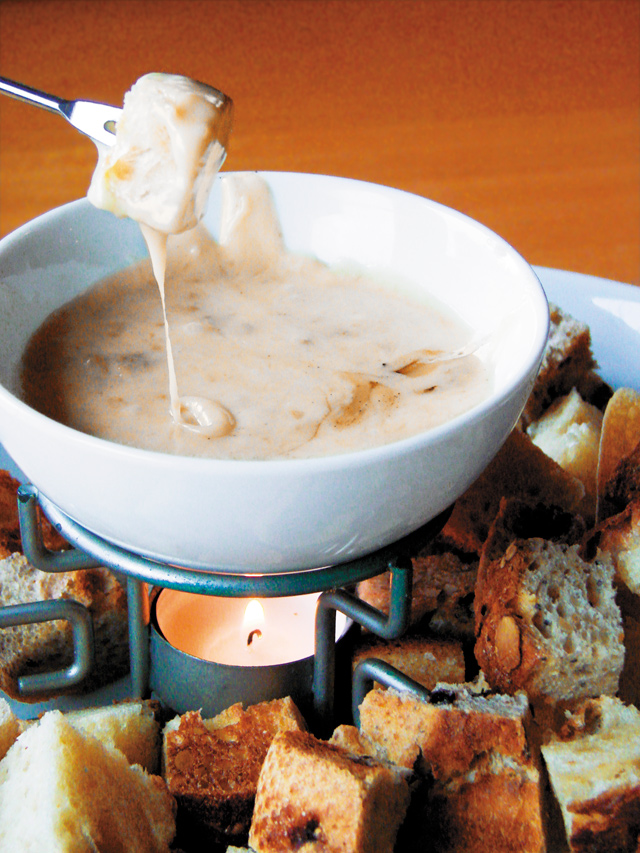 Variety of crusty breads to dip into a pungent Taleggio fondue.

A taleggio cheese fondue arrived full of molten goodness with a tell-tale whiff of serious cheese. Served with cubes of crusty bready, atop a little lit candle, the cheese stretched and bubbled in the most satisfying manner. Especially wonderful was a cranberry-nut whole wheat bread, dragged through the pungent cauldron.

Our entrée was a dish of gnocchi, tossed in a light cream sauce with barely blistered cherry tomatoes that popped in the mouth, Kalamata olives, and an artichoke heart placed at the center of the dish like a floral bouquet.

I was sent with strict instructions from a friend that I must absolutely be certain to experience the pie. The crust shattered at first forkful. The berry stuffing was so perfectly composed that the natural sweetness came through. There was none of that empty pocket that can come with a berry pie–the land of forgotten sweetness between the top layer of crust and where the berries collapse below.  It was so perfectly composed, with a dollop of freshly whipped cream on top that I’m considering commissioning a painter to forever commemorate this singular pie experience. Even the whipped cream was extraordinarily beautiful, a lovely golden hue, clearly coming from cows who have been allowed to graze.  It was a stunner for sure. 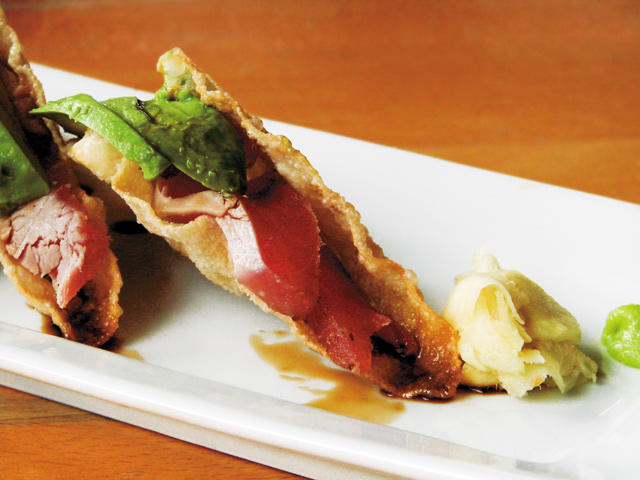 In addition to the delightful dishes that the kitchen churns out, Graden also spends time teaching at a nearby college. New Scenic also offers catering, which would absolutely make a summer destination wedding.  He’s clearly passionate about everything he does, from cultivating his restaurant, carpentry, teaching, to spreading the word about eating locally (even if we couldn’t possibly harvest artichokes on the tundra and that tuna didn’t come from across the street).

Also, after years of requests, Graden is putting together a cookbook from the New Scenic Café; expect to hear more about it this year.

There is a place in the front where they sell maple syrup–made from trees tapped nearby–and other artisan wares.  The ties to the community are evident in the artwork displayed on the walls as well. A friend’s young daughter even created the beautiful watercolor painting that appears on the back of the menu.

No matter the season, a trip up the North Shore will always include stunning vistas…and those should always include the view looking out from inside the New Scenic Café over a slice of perfect berry pie. 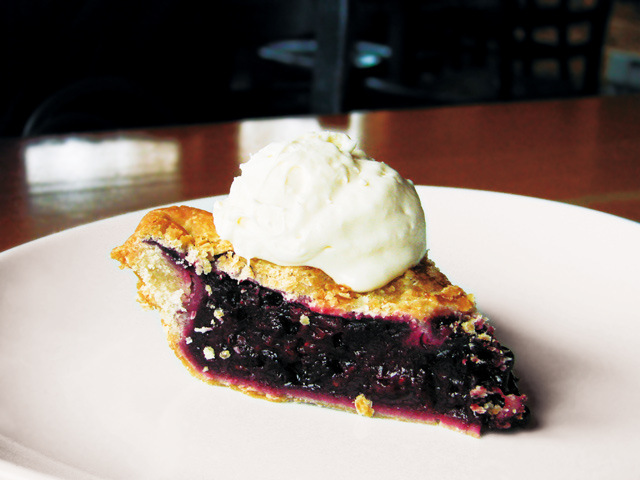 Berry Pie. You must get the pie. 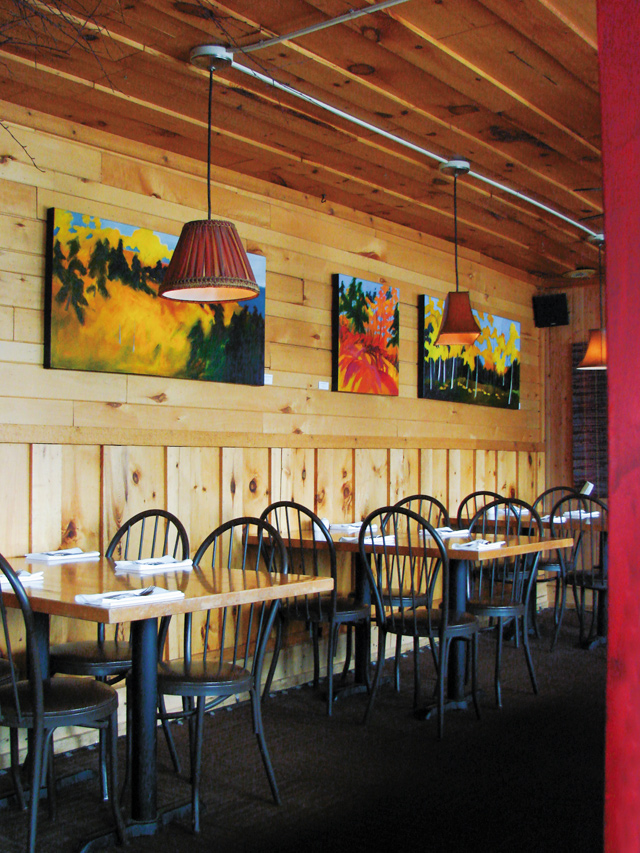 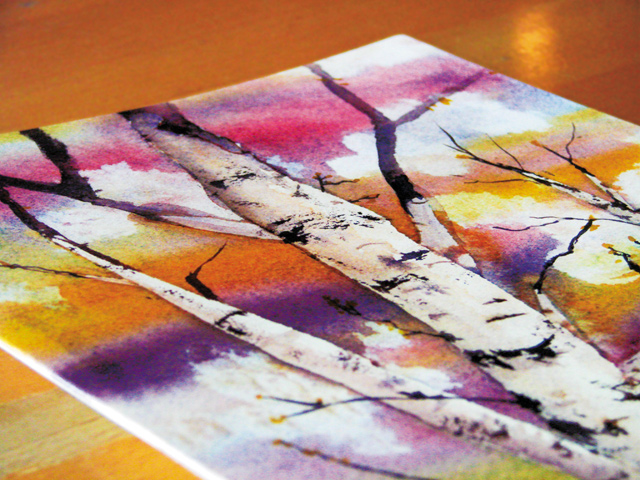 The Longfellow neighborhood is hopping. As press loomed, I was still waiting for the new Blue Door Pub to open, which it should be by the time this lands in your hands. I’m anxious to see what they do with a larger space, but already know that my love for that Jiffy Burger will always remain true.

Just a hop, skip, and a jump down East Lake Street from there, the newly opened Parka has already gotten some fawning reviews. My first few tastes were stunners. It’s a collaborative effort from Erick Harcey (of Victory 44), Dogwood Coffee, and Rustica Bakery. Pick up packs of those insanely good bittersweet chocolate cookies, a pound of beans, or grab a lunch or dinner full of innovative comfort foods. There was a while where everyone was griping about the trend of foams–I say, some are here to stay. The cream cheese “whiz” served with the ham- and pickle-packed tots was certainly a treat.

Speaking of culinary masterminds, Doug Flicker, owner of Piccolo and purveyor of astounding food treats, is taking over Sandcastle. The concession stand at Nokomis will follow the new tradition of Bread & Pickle at Lake Harriet and Sea Salt at Minnehaha Falls. Expectations are high and Flicker often exceeds. Bring on the warm weather!