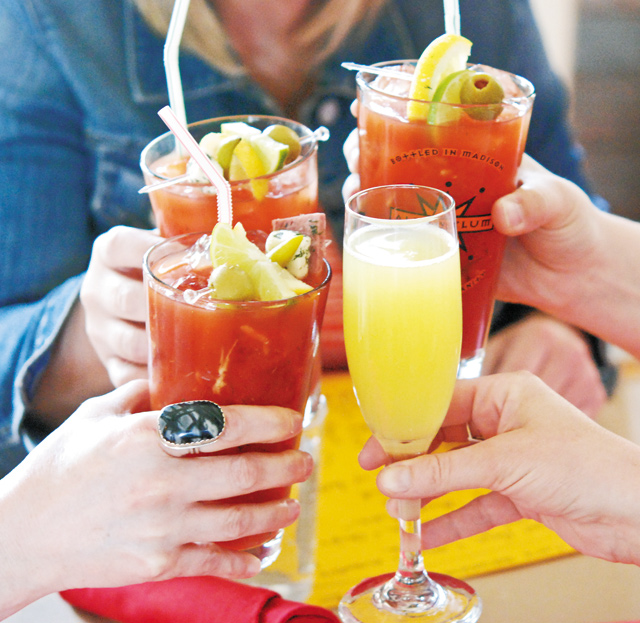 Beautiful bloodies with friends. Photo by Stephanie A. Meyer

Whoever coined the phrase, “it’s not the journey, it’s the destination,” could have been talking about the Great River Highway’s sweeping vistas. Once you get beyond the flat side of St. Paul and cross the river into Wisconsin the road begins to pitch and turn, winding through rolling hills where lazy milk cows graze. Herds of sheep munch grass as you whizz by. Diving down through the bluffs, giant birds of prey circle, hunting nearby by waterways. It’s a stunning drive that it’s almost enough to forget where you’re going. That is until you see the red, black and white sign beckoning, “Chef Shack.”

Carrie Summers greeted us at the door. Half of the lovely couple who led the food truck charge into the Twin Cities and have since opened this spot with the exclusive summer hours. Her partner Lisa Carlson was ensconced in the small kitchen inside, whipping up all manner of delicious dishes.

Summer and Carlson first met back in 2001. Carlson was the opening chef at Café Barbette in Uptown. She hired Summer to be her sous chef. Little did they know how perfectly they would fit together. Carlson’s food is approachable elegance with a focus on organic ingredients. Summer knows her way around an understated dessert, coaxing layers of flavor with judicious amounts of salt to balance the sweet. Anyone who has tasted those divine mini donuts from their food truck knows that. 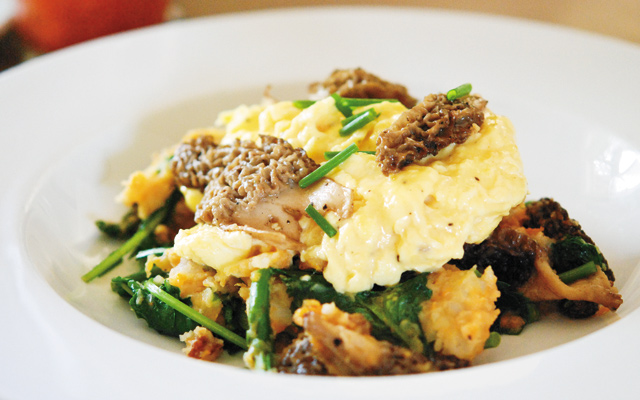 A multitude of morels. Photo by Stephanie A. Meyer

What began as a professional relationship became personal. To watch the two work together is to see their unspoken understanding of each other’s strengths; they simply complement each other beautifully. Thirteen years together have passed and they have hit their stride.

It was a long road from the Mill City Farmers Market, where they began as a stand called Urban Donut to the trucks (they now have several) all the way out to Bay City. They had long searched for a restaurant space to call their home. On the one hand, it had to have a kitchen space that could accommodate the trucks needs, but it also had to have the right vibe for what Carlson calls “ranch rustic country French” cooking.

They very nearly had a different space, a little spot in the city that was almost home and then it didn’t work out. That project scrapped, they had to begin again. A friend directed to them to a restaurant in Bay City, Wisconsin, about an hour outside of the metro area. The restaurant owners had been looking to sell their modest sized restaurant to someone who would take it to the next level. They would rather let it languish than sell to someone who wouldn’t care for their customers and all they had built. After several meetings and yet more time, the couple decided that they could entrust what they had built to Summer and Carlson. 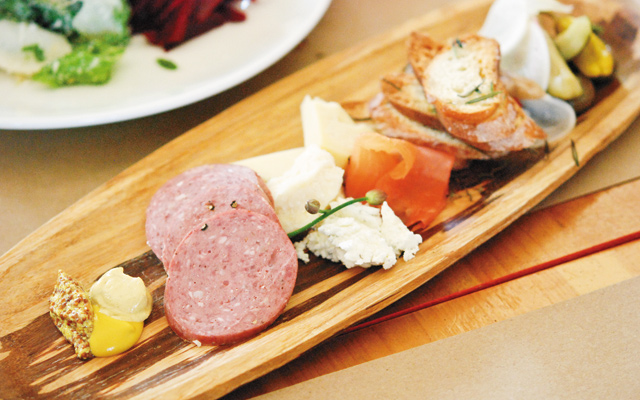 They gave the space an overhaul – which gave Summer the chance to dig into her antique collection (another passion of hers) to decorate the restaurant. The décor is accented with antique colored bottles. On one wall hangs a collection of sweet little mirrors. (She admits one belonged to an old girlfriend – who spotted it right away when she came to visit.)

The space is personal, comfortable, and beautiful, like being invited to a friend’s cabin. It’s just that those friends happen to be fabulous cooks with a full bar. (The bar, by the way, has some of the most comfortable barstools my fanny has ever had the pleasure of perching upon.)

They’re only open on the weekends in the summer. We visited for brunch on a full of golden sunlight. The backyard was set with extra seating. We could see the waves lapping against the shore in the distance.

Our brunch began with a selection of incredibly fresh oysters, lush, briny and very likely the best oyster I’ve had the pleasure of tasting in recent memory. We paired them with bloody Marys, swimming with shreds of horseradish, garnished with a little hunk of dilly cheese that walked that line between drink and meal.

The charcuterie plate was a selection of cured meat, salmon, local cheese (this being the dairy state) and a few of their perky little pickles. Each dish was respectful of the raw materials, reveling in the fleeting seasons. 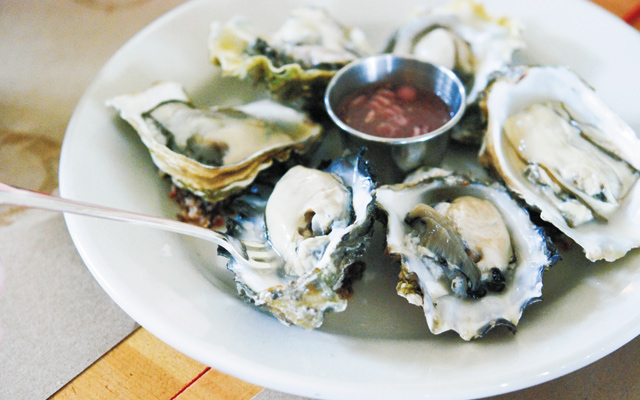 Oysters so fresh you can hear the ocean. Photo by Stephanie A. Meyer

Eggs were gently scrambled and positively brimming with morels of the moment, set atop softly cooked greens: astoundingly simple, yet so wonderfully rich in flavor.

A walleye sandwich banished all memories of disappointing fish fries that came before it. A thin crunchy shell yields easily to the tooth, revealing a fat hunk of ultra-moist fish, full of pristine lake flavor, topped with a little dollop of their tartar sauce and one, solitary pickled ramp. All this was framed like a great piece of art by a soft, puffy bun.

And then, because it was Sunday and because I wasn’t driving, we decided to sample their house made limoncello, served in a collection of vintage glasses. A decision I could never regret.

Chef Shack Bay City is not only worth the drive, it might be worth planning a road trip around. In this case, it’s the destination. 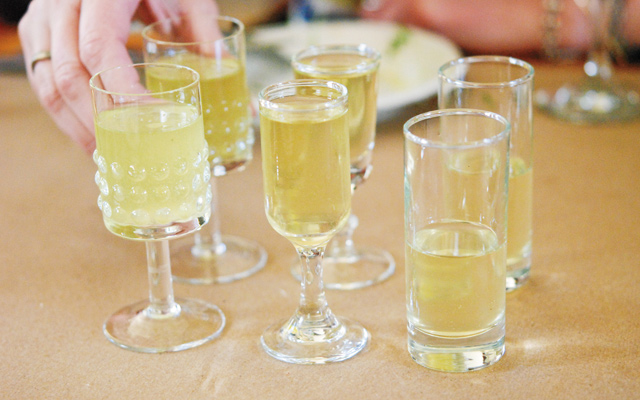 Limoncello in flight. Photo by Stephanie A. Meyer

Wine bars abound. Broders have opened their new spot Terzo just across the street from their pasta bar and French Meadow has opened Bluestem adjacent their Hennepin Avenue location.

The Buttered Tin is now up and running in St. Paul’s Lowertown. Serving breakfast, lunch as well as beer and wine, it’s likely to be a new neighborhood gathering spot.

Marin is opening their doors in downtown Minneapolis at the base of the Chambers hotel. The space has been completely redone by Shea, Inc and will serve healthy, fresh food.