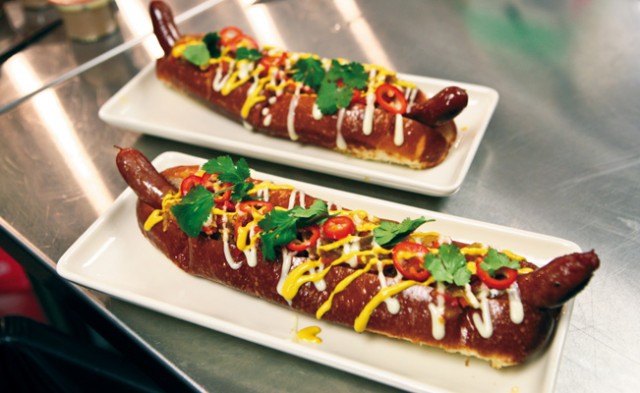 Butcher & the Boar on first glance is elegant, nice; easy.  The copper-colored wall that faces the street glitters.  The penny floor, made from over 12,000 pennies, catches the early afternoon sunlight that glints off the line of new taps.  At second glance, everything is just a little rough, the slow burn of a pork fat-infused shot of Wild Turkey leaves the drinker exhaling soft breathes of smoke and bourbon. The artfully charred-wood rustic walls mix with the reclaimed metalworks fashioned into light fixtures. The play of heat, char, age, and smoke infuses every bite of food we tried.

Owner and Chef Jack Riebel has been doing fine dining for over 25 years. Most recently at the Dakota, which he left to open this, the first restaurant he’s ever owned. He’s ready to take the dining down low to easy eating.  He’s making what he referred to as, “Real food. Simple. Big smoke – big flavor.  I kept going to all of these beer dinners and the more fancy the chefs tried the make the food, the less it matched the beer.” The bar program will prominently feature beer and bourbon, a drink the chef earned an affection for from his Grandma, a Wild Turkey devotee.

On the day we visited the final preparations were still going into the restaurant.  The walls were being blotted with stain, the bar awaited its actual top, but the kitchen was humming and the walk-ins fast filling with food.  At press time, the projected opening date is still held at March 8th. (Check our Facebook Page for more up to date information – and likely a picture of me drinking at the bar the second they start serving.)

The unfussy food is full of nostalgic flavors with a refined, perfect Peter Botcher twist. Botcher is Jack’s right hand man.  Riebel jokes that Peter’s the butcher and he’s the bore (hardly).  Botcher is an expert sausage-maker. Raised outside of Winona, he wears his German heritage with great pride. Churning out velvet-textured turkey liver Braunschweiger, smoked pork jowl that’s used in place of bacon, garlicky rich venison summer sausage, fat-studded beef sausage spiked with cumin, paprika and garlic, with a faint, herby note from something he won’t tell me about.  All the meat is sourced from farmers who believe that the quality of the meat is directly linked to the care of the animal.  All the beef is grassfed, which has a bad rap for flavor. People say that it’s too lean, but the gorgeous fat, glistening off a smoked beef shortrib that we sampled was impressive with the luxurious mouth feel – not to mention flavor. 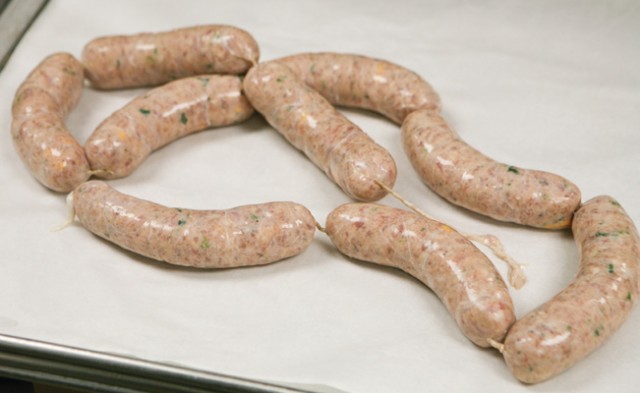 Not that it’s entirely a meat-fest.  The menu will include walleye, a seafood-based booya, and I overheard him mention something about pinto bean “meat” acting as chorizo.

The bar will be serving 65 varieties of bourbons along with some infusions and the sort of craft cocktail list that refined diners have come to expect. The patio is tucked in off the street, with a reclaimed tree trunk being used as high top tables.  When it opens it will likely be one of the best outdoor quaff spots in the city. Half will be a beer garden and half will be set up for dining.  In the warmer months, the restaurant will seat up to 350 people which they’re going to need for Pride. Riebel is acutely aware of the surrounding area’s gay community and roots.  Steps from Loring Park, he hopes his restaurant will help revitalize a part of downtown that has been a bit sketchy in recent years.

While the weather is still too cold for the out-of-doors, there are still plenty of spots to tuck away. Inside, the space keeps going and going, with tons of nooks and crannies. The downstairs will hold a small speakeasy space and another room that will eventually be available for private parties.  They also plan to put in a kitchen table, where large parties can gather and observe as Chef whirls around his kitchen.  (The man seems to only operate on fast and light-speed settings.) Parking will be easy with valet, a small lot, and a nearby ramp. They’ll open at 5pm nightly. 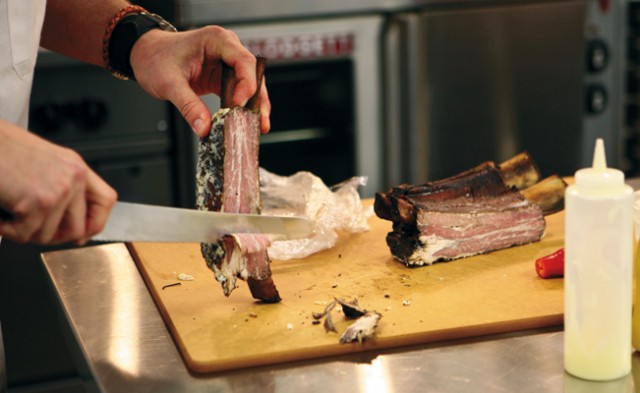 The one menu item that sums up what they plan to do at Butcher & the Boar is the footlong hotdog. It’s downright lurid in size, hanging out over either end of the bun.  The buns are almost pretzel-colored, toasty brown and made especially for the restaurant by nationally-renowned pastry Chef Michelle Gayer’s Salty Tart Bakery.  They split them on the side and toast them in butter–lobster roll style–before sliding in the grill roasted wiener. The dogs are the only sausage not made in house. Because of the necessary volume, they had to out-source.  But, they are smoked and finished in house and come from Botcher’s recipe (Germans apparently take their hot dogs very seriously).  The exterior casing snaps with each bite.  The dogs are dressed under a Cajun chow-chow, tangy with a bit of pickle-brineyness followed by a subtle sweetness. Drizzled with bright yellow mustard and a bit of creamy mayo, they’re dotted with intimidating-looking red chilies.  While each bite has a unobtrusive burn, it’s just the right amount to balance the black pepper flavor in the dog and the sweet, sour twang of the chow-chow. Close your eyes and it’s not hard to imagine a bustling patio scene, surrounded by friends, sandal-clad feet up on a chair, cold pint of beer sweating on the table top, hiding out after a too-long work day.

Butcher & the Boar is located at 1121 Hennepin Avenue in Minneapolis: www.butcherandtheboar.com.  Facebook: http://www.facebook.com/Butcherandtheboar