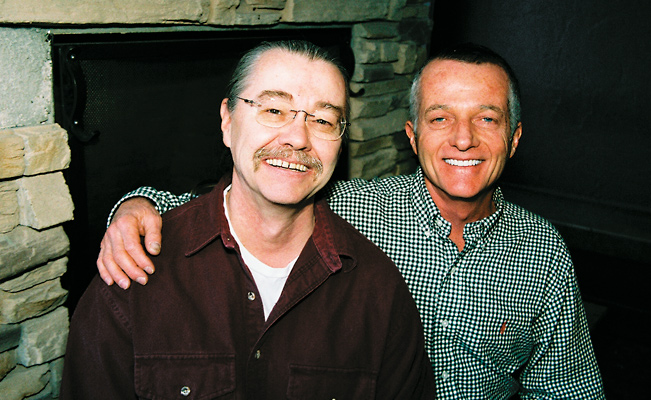 In March 1977, when the Saloon in Downtown Minneapolis opened its doors, James (Andy) Anderson and John Moore came on board as bartenders from the first day. They bought the establishment in December 1981, becoming the first openly gay owners of a Twin Cities gay bar. Having been at the helm of the Saloon for more than 30 years now, they hold the local longevity record for proprietorship of a GLBT bar.

Over the years, the Saloon has stood the test of time as a popular gathering place for our community. Its hallmark always has been the best dance music. During myriad fundraisers, the bar has channeled many dollars to local charitable organizations such as OutFront Minnesota, The Aliveness Project, PrideAlive, One Heartland, and the Imperial Court of Minnesota, to name just a few.

To celebrate its 35th anniversary, the Saloon is hosting two gala events the last weekend in April:

• On April 27, starting at 9 PM, a wedding-themed party features fetching groomsmen and bridesmaids, complete with a garter throw, a catching of the bouquet, and a couple’s photo booth. It’s a benefit for Minnesotans United for All Families (MUAF), which battles the antigay marriage amendment on the ballot Election Day this November, with the entire $5 cover going to the beneficiary. That same night at the bar (9 PM) is the afterparty for the Twin Cities Gay Men’s Chorus’s benefit concert to fight the amendment—5-8 PM preceding at The Woman’s Club of Minnesota, 410 Oak Grove Street, Minneapolis, cosponsored by the Saloon.

• On April 28, Noon-2 AM, an all-day/all-night anniversary party at the Saloon offers a bevy of entertainment; drink and food specials; giveaways of merchandise displaying the bar’s new logo; and unveiling of other new branding items. Watch for updates as the party draws closer.

Saloon General Manager Tim Balfanz promises, “We’re going to blow it out of the water to celebrate the long history of the Saloon.”