Rocky Horror Gets Spectacular Treatment at THE LAB 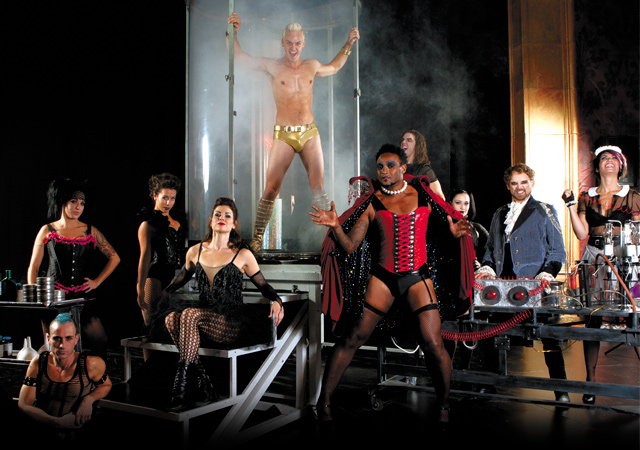 Check out more of the Rocky Horror photos in the Gallery below.

The Rocky Horror Show has continued to fascinate ever since its 1973 London stage premiere. Cardinal Theatricals, which gave us a powerful Rent last year at the LAB, has returned to that venue, with designer-director Andrew Rasmussen back in the saddle to revive Richard O’Brien’s rock musical classic. Or, perhaps more accurately, to strap us into its harness.

Rasmussen has given the LAB a transformational Gothic interior makeover that spills over well beyond just the regular stage playing area. You walk down three flights of stairs to be seated. (There’s also an elevator.) Rasmussen has taken to heart a line in the musical that he says “sums up my philosophy: ‘Don’t dream it. Be it.’ The show is about all kinds of crazy people and someone who has a complete vision for something and he does it.”

To point, transsexual mad scientist, Dr. Frank N. Furter ensnares a young straight couple in his castle where they discover he has created an actual man. This can be seen as Nietzschean/Ayn Randian license to cruelly exploit the unassuming or as a whack on the hindquarters of institutionalized erotophobia.

Moreover, in 2011, some will see inherent commentary on the concentration of wealth and secretive power. As Andre Shoals, who plays Furter points out, “He is so wrapped up in his own world that he’s a recluse. Look at celebrities today who just lose themselves in their own world, in a complete bubble. They insulate, disconnect themselves.” Not to mention various billionaires.

Don Shelby, of WCCO fame, plays The Narrator. He shares, “I first came into contact with the show in 1975. I thought it was such an in-your-face sort of show for the time. It was shocking for a lot of people, but it was also hilarious. The players made the shocking material easy to handle and then it became iconic after 10,15, 20 years. You know it’s iconic when actors like Tim Curry in the Picture Show (film version) refuse to even now talk about that role because he just doesn’t want to remind people. He would be forever Dr. Felix Frank N. Furter to everybody. It just became iconic because it represented a rebelliousness. It represented an acceptance of alternative lifestyles. It represented everything that was smoldering in that time–almost like the first person to speak a language that is understood by everyone.”

Rocky Horror also speaks the universal language of over-the-top melodrama. To that point, Shoals has tapped into O’Brien’s affinity with vintage films. He says, “Because Frank N. Furter can be so high-camp he’s right up my alley. When you look at all those old movies, they play so well to the camera in their emotions. Look at the close-ups. It’s not like film today. There’s the difference between how actors act today and how they did then. I’ve chosen to insert where he acts out Norma Desmond (Sunset Boulevard) and he’s got his Jack Nicholson moment from The Shining.”

Jamecia Bennett, named Lavender’s ‘07 Best Musical Actress (Penumbra’s Get Ready) plays two men: Dr. Scott, for whom Shelby is coaching her kooky German accent, and Eddie: “I’m in rock n’ roll mode. I get to wear my leathers and be very dominant. So I’m excited about that!”

Craig Daniel Stastney plays Rocky, Frank N. Furter’s hunky laboratory creation. He’s been working out six days a week, taking in protein and creatine. He says that Rasmussen “wanted Rocky to be like a new born baby almost, but a grown man with the mind of a child. Trying to be a muscle-y guy with the mentality of a child is interesting.”

Indeed, raw sexuality and innocence are at the heart of Rocky Horror. As co-designer Jeffrey Petersen puts it, “We’re making it as fabulous as possible and sort of spooky and mysterious, but sexy.”