Review: My Secret Language of Wishes 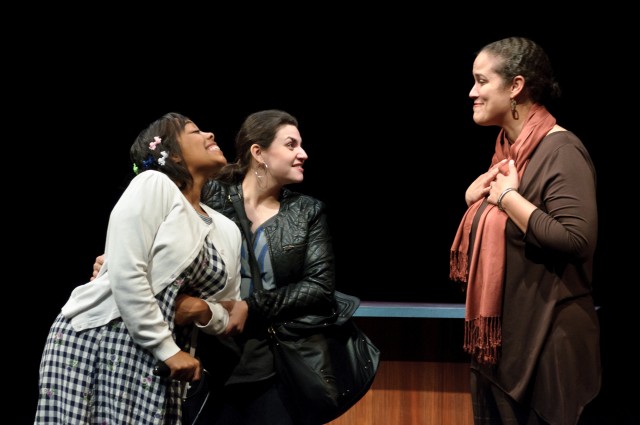 Caution: My Secret Language of Wishes is a tearjerker and I say that respectfully. Cori Thomas’s drama is also a sterling example of a rare play that seamlessly interweaves complex identities based on race, ability capacity, gender, and sexual orientation, and socioeconomics. In other words, it’s one of the best written American plays of recent years.

And for those who truly love storytelling and theater, great writing is the root of many a great theatrical experience which director Marion McClinton’s breathtaking all female cast delivers. Brittany Bradford gives an utterly poetic lead performance as Rose, a disabled African American girl who prefers that her idealistic white caretaker, Dakato (a vibrant Taj Ruler) become her guardian rather than Brenda (piercingly portrayed by Jevetta Steele), an overly aggressive businesswoman of color. However, as hard-driving as Brenda is, Thomas does not stereotype her as a wealthy villain, though it’s very clear that Brenda is arrogantly self-satisfied because she is wealthy. She (mis)uses that and the clout that money brings, as her calling card in all situations. However, things shift when Brenda is made to face her past.

One half a lesbian couple, Jo (Signe Harriday), represents Rose, and in so doing, she must face her own nagging issue: that she has broken a promise to her life partner, Cecilia (Nora Montanez). That promise was that they would have a baby together. Harriday and Montanez vulnerably flesh out the couple’s relationship in such a way that it’s difficult to side with one partner over the other – this is the very definition of effective acting in a complex realistic drama. On the one hand, the audience can see what Cecelia cannot see: the ‘hands on’ way Jo is mediating an emotionally draining case that involves parenting at its most basic level. And because Cecilia cannot see this, she cannot fully understand what her partner is going through. In other words, it’s the story of almost any relationship where one person has a job that makes heavy emotional demands. That said, Jo cannot see that in not having the courage to either break off with Cecilia or finally find the courage to have a child with her, that she keeps herself outside of integrity to both her true self and to their relationship. And when that integrity is compromised, disharmony in the rest of one’s life seems to occur.