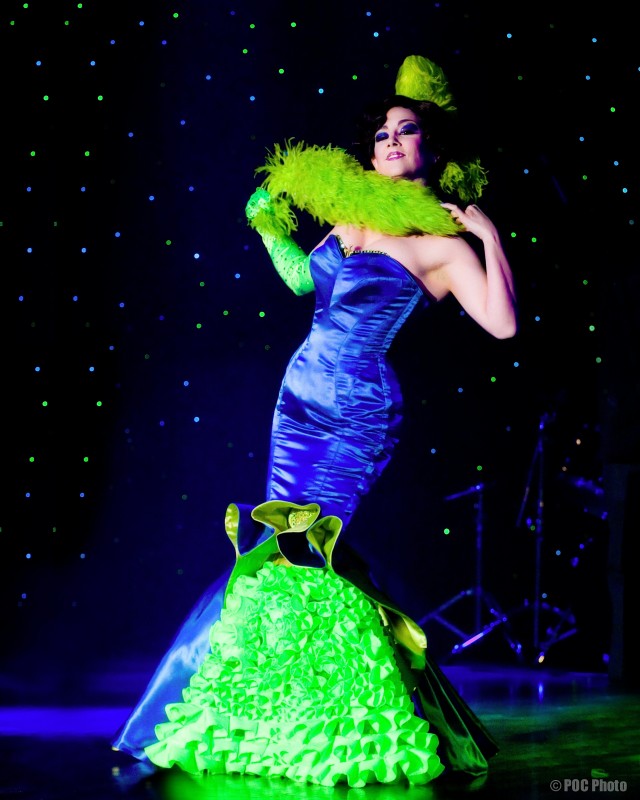 Indigo Blue, the Reigning Queen of Burlesque, aka The Twirly Girl, will perform at the Ritz in a benefit dubbed The Playful Peacock Show for the Burlesque Hall of Fame <www.burlesquehall.com> along with Ophelia Flame, Foxy Tann, Gina Louise, Coco Dupree, and other Burlesque luminaries. The Seattle native is at the forefront of what may be the most sex-positive live performance development of our time. I inquired about her thoughts and views on the rise of burlesque in recent years.

Regarding Burlesque today and why there is a revival, Queen Indigo observes:

“Burlesque is a refreshing view of sexuality as something to be embraced in all of its complexity and stereotypes. It provides an opportunity for performers to express themselves in a form which they can completely create. I think it is timing, kismet, and political inevitability that have all contributed to the resurgence of Burlesque.”

On Incorporating Her Sexuality and Jewish Heritage Into Her Acts, Her Majesty says:

“I have some acts that are overt, specific references to my sexuality, such the ‘No Glove, No Love’ act, which is a tribute to Lesbian safer sex. It is a balloon dance, except instead of being covered with balloons, I am covered with blown up latex gloves, and then an excess of deflated gloves as fringe. I also do an epic Passover act, in which I act out the plagues, and wear a hat with the Passover Seder plate on it. And I have a popular Channukah act in which I put candles between my toes, and light them to become the menorah.”

“I also do things that are a bit more subtle. When I do my tribute to Ricci Cortez, a lesbian Burlesque performer popular in the 1950s and ’60s, I have an attendant on stage with me in a tuxedo. Whenever possible I have that person be a butch lesbian. This is partly to honor Ricci’s partners, and also to specifically Queer me on stage. I do not necessarily ‘read’ as queer, but by having my attendant be a butch, my femme identity becomes more visible. Thus I am able to express a more complex sexuality that challenges common perceptions of ‘feminine’ as ‘straight’. This might seem simplistic, since most folks in the Burlesque community are incredibly open and aware. But performing to mainstream audiences as a queer high-femme stripper is still a political act.”