Montreal was born from trappers seeking riches, soldiers in service to their king, and priests sent forth by God. My personal agenda borrowed from all three. I’m definitely greedy—for good eating. And, as an army travels on its stomach, I eagerly re-upped. But primarily I came to worship—to pay lip (smacking) service to the Holy Trinity of Montreal’s culinary icons: smoked meat, bagels, and poutine. (Whoever said, “Man does not live by bread alone” was absolutely right. It takes all three.) Oh, there’s also plenty of fine dining in this city of 5,000 restaurants (over 10 per square mile), so we’ll dip our spoons in those as well. 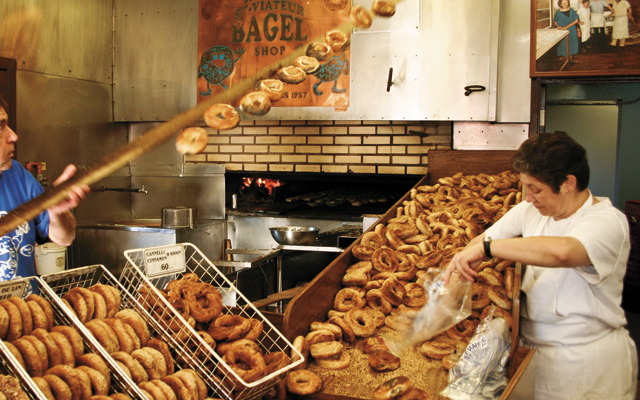 Bagels, smoked meat, poutine: the top three reasons to board the plane. They’re comfort food; they’re the sustenance of immigrants.  Montreal—the second-largest French-speaking city in the world—grew up along the St. Lawrence River where the first European arrival, voyageur Jacques Cartier, beached his boat in 1535. An archaeological museum displays those early stone foundations along with—huh?—an exhibit of the Beatles’ more recent visit in the 1960s. Cartier’s house still overlooks the harbor, aside a tiny sailors’ church from the 1600s. Nearby, an early marketplace has morphed into stylish Marche Bonsecours, a showcase of classy Quebecois designers. Get the whole story at the Centre d’Histoire, a chance to relive five vibrant slices of Montreal’s history, unraveled in catchy non-museum-speak. Play Queen for a Day at the Pierre du Calvet, a luxe 1725 mansion-turned-hotel befitting Louis XIV, who bestowed his royal approval on the Grey Nuns’ convent nearby. Today the historic limestone facades here in the Old Port host trendy shops like Sweet Fellow (where Louis could trade his wig for man bags, chic and cheeky bow ties, fab fedoras), art galleries, and cafes aplenty.

The city’s western sector bears streets named for upright British citizens, while those in the eastern, French, division invoke the names of saints. Along Sherbrook Avenue’s Golden Mile, gawk at the mansions of the one percent of the 1800s, marshalling the Museum of Fine Arts with eye candy ranging from Old Masters to contemporary Canadians and enviable First Nations sculptures. Nearby, the McCord Museum continues the First Nations story in a display entitled “Wearing Our Identity” featuring beaded moccasins, fur parkas, bear teeth necklaces of fine design. Meanwhile, the city’s Contemporary Museum  updates the tribes’ views via hip-hop art. 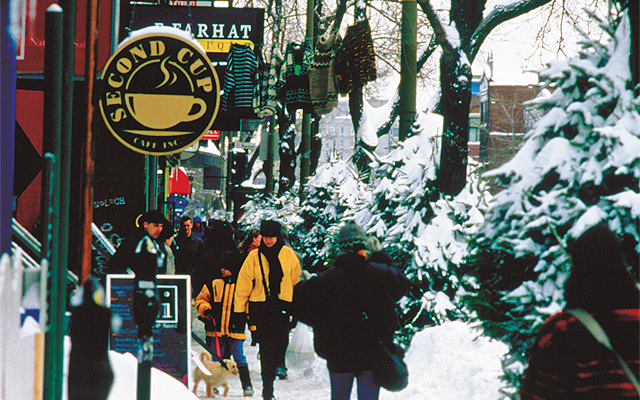 Head north to discover Montreal’s Jewish enclave, peopled with black-hatted Hassidic gents, and the cornerstone of a foodie’s pilgrimage. In this neighborhood of humble homes adorned with Montreal’s signature outdoor staircases (beware in winter!), St.-Viator Bagels has served as the city’s culinary E R since 1957, paddling smoky circles from its woodfired oven 24/7 every day  of the year. Grab half a dozen, and half will have disappeared into a dining memory before you hit the sidewalk.

What makes a Montreal bagel unique? It’s smaller, denser, and sweeter than its stateside cousins, thanks to malt in the batter and honey in the water dip. How many does St.-Viator pump out? “We’re supposed to say ‘a thousand a day,’” grins the counter man, “but we’re not counting.”

In the Plateau, also home of Little Italy, the Jean-Talon Market is a foodie magnet, crammed with stalls celebrating all things Quebecois: luscious cheeses, rich pates and sausage links, premier breads and pastries, and endless produce, from cauliflower big as beach balls to carrots akin to majorettes’ batons, to all things apple—cider, ice wine, pyramids of shiny fruit. Also, there’s maple everything (sugar, syrup, candy). Plateau hosts cozy bistros like Chez Close, where brunch involves a stir-fry of eggs and duck gizzards, or simply duck confit, along with steaming cups of chocolat and beignets for dessert. 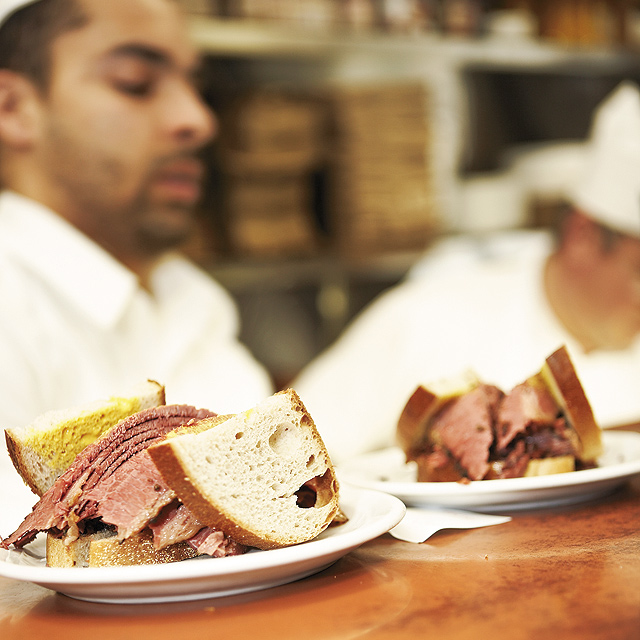 But I’m here for the smoked meat. Head straight for the Plateau’s Holy Temple, aka Schwartz’s Deli, smoking its uber-juicy, legendary brisket since 1928. Fanatics, including yours truly, line the sidewalk in the driving rain for a chance at that fabled sandwich—piled high on rye bread swabbed with mustard, along with a pickle so garlicky I was friendless for days. Jostle your way to a shared table just like myriads of fans before you, from Celine Dion to Jerry Lewis.

Now for poutine. And, ahem, a side of foie gras. That’s the magic combo at Au Pied de Cochon, arguably the best restaurant in the city, if not all North America. Snag a seat at the counter of the tiny, lively dive—the polar opposite of haute cuisine— to catch the floor show: eight flaming burners commanded by cooks with the agility of a Cirque du Soleil performer.

The meal is not for the faint-hearted, but for the fortunate. Poutine rules—that only-in-Canada concoction of gravy gushing over fries, all pocked with squeaky cheese curds. It’s served everywhere from McDo’s to Mache, a diner with add-on options like hot dogs and pineapple (don’t!), to Cochon, where it’s glorified with a globe of foie gras giant as a grapefruit. Save room (hah!) for the iconic pig’s trotter, served up with gravy, mashed potatoes, and stewed apples. And for dessert, certainly the signature maple milkshake. Patron Martin Picard slides a glass of Armagnac my way to glam up the drink. 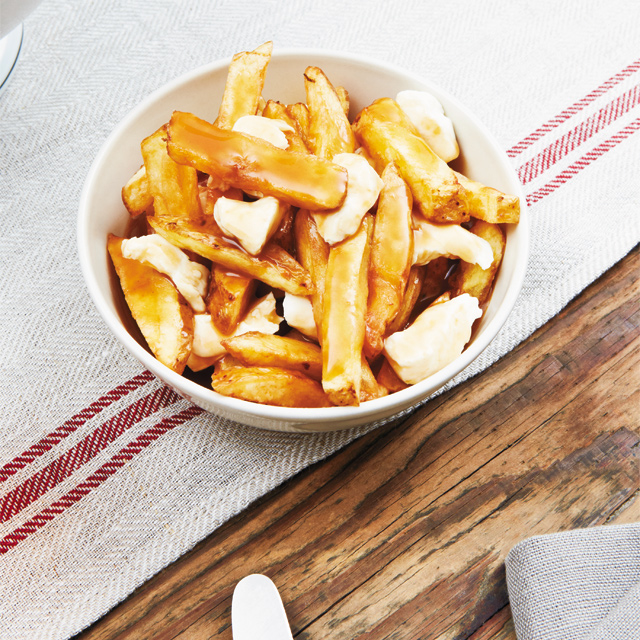 Foodie voyageurs can sign on for dining tours (www.ToursCulinairesMonreal.com) of the grunge-going-glam St.-Henri neighborhood. Amid re-emerging storefronts we discover Rustica, a shiny bakery where macaroons reign supreme (well, so do the Nanaimo cookie bars, cheesecakes, everything). We end up at Grumma 78, a food truck-turned-warehouse destination, to feast on inventive hybrids like a banh mi taco, escargot quesadilla, or chicken paired with johnnycakes.

The liveliest boulevard in the entire city is St.-Denis, vibrating with trendy apparel emporiums, bars, clubs, and BYOB cafes. Its near, slightly more polished neighbor, St.-Laurent, is  home to Juliette & Chocolat, serving wicked-good pitchers of chocolate, warm or cold, chosen by country of origin and degree of blessed bitterness. Back in the Old Port, The Champagnerie boasts a dozen bubblies by the flute to accompany well-curated noshes. They warm the trek to Toque, the fanciest table in town, for locally-sourced baubles like foie gras mousse with apple glaze and popcorn; venison haunch with cauliflower, black cabbage chips, and wild mushrooms; and Arctic char confit burned with maple syrup.

Time for the airport. Glad they weigh the luggage and not me. For information, visit www.tourisme-montrreal.org 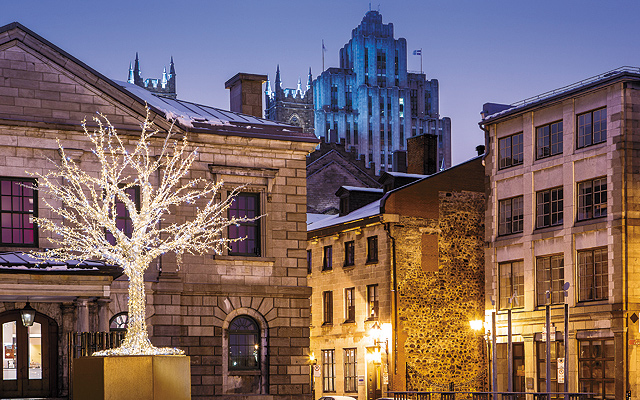 The Village, west of downtown, boasts one of the biggest boys’ towns in North American, with B&Bs and scads of bars, including Stock, Campus and Le Stud. 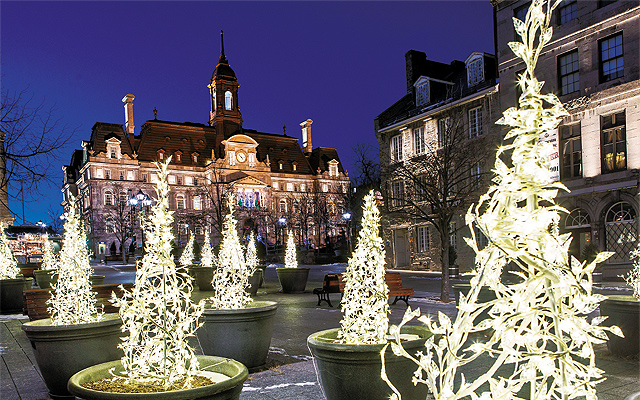