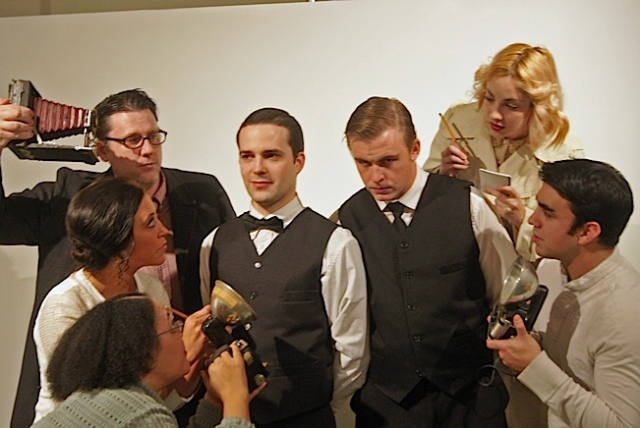 In 1924 the Leopold and Loeb court case was dubbed The Trial of the Century. In Chicago two young men born to wealth, Nathan Leopold and Richard Loeb, pleaded guilty to the brutal death of 14 year old Bobby Franks. Legendary attorney, Clarence Darrow, age 67 at the time, came to their defense. Robert E. Crowe, the prosecutor, passionately protested Darrow’s assertion that the men were insane.

Playwright John Logan’s evenhanded 1985 drama, Never the Sinner, which depicts the trial and sensationalism surrounding it has been given a crackling production by Candid Theater Company at the Cedar-Riverside Peoples Center. Director Justin M. Kirkeberg’s precise ensemble portrays not only the major players in the court case but also journalists, court room experts and staff, law enforcement personnel, and groupies.

The story line of Never the Sinner is anchored in the judicial realm but flashes back at times to events surrounding and including the crime. James Napoleon Stone as the easily led Leopold and Peter Beard as the seductively coercive Loeb compel as a beta male quite willingly and readily led by an alpha male. Leopold is beyond infatuation with ladies’ man Loeb and they work out an arrangement wherein Leopold assists Loeb in criminal acts in return for sex with him. At one point the Franks murder is described as ‘a homosexual pact’. Stone and Beard are utterly symbiotic in their mutual chemistry.

A woman, Katherine Preble, plays Crowe with steely resolve. Steve Flamm brings folksy firmness to Darrow. Like Stone and Beard, this pair is beautifully matched. Whatever side you may be on regarding the death penalty, these performances will definitely challenge your position. Moreover, Preble and Flamm find the torment in their characters as both are made to consider the whole ghastly situation on various levels. Their dynamic energy level contrasted with the dynamic energy level of Beard and Stone propels the whole superb ensemble into a riveting theatrical experience.