Playing for the Other Team: Pride in Our Sports

My groom’s dinner (Nellsdinner?), despite Minneapolis’s first tornado watch of the season, fortunately went according to plan. Guests spilled out onto our porch during rain-free moments, bridesmaids mingled with long-time friends, nieces and nephews ran muddily around the yard, and the Nellsmen, Dads, and I sat huddled in the corner hovered over our smartphones, pretending not to follow the NFL draft. Clinton-Dix to the Packers! My Wisconsin relatives cheered! Bridgewater to the Vikes. Dang, well played, my friends. Michael Sam to the Rams! History is made! (If he can make the team—good move on postponing his reality series, Oprah. Let him focus on football first.) After a whirlwind three weeks of weddings and parties and honeymoons and hoopla, I find myself more than a little relieved to be sitting scouring sports blogs like I’m supposed to. Ah, routine. All is well in the world again. One of my favorite weeks is right around the corner, and I’ll soon be able to break out my rainbow suspenders! And as this issue should make clear, there’s much to celebrate this Pride Season, especially in the world of sports. Here are three worthy examples. 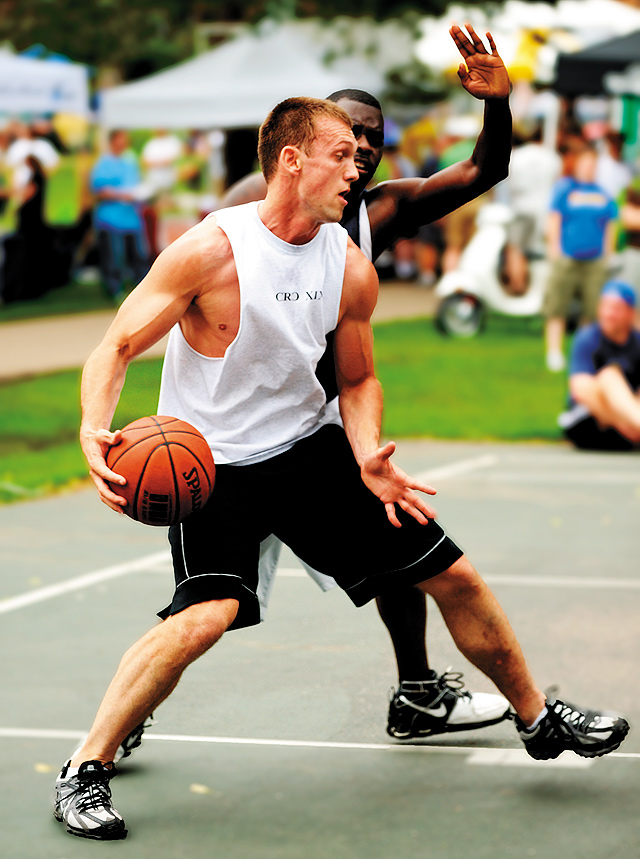 Mill City Hoops The newly minted Mill City Hoops Basketball League will debut Saturday, June 28th in Loring Park with a Shirts and Skins 3-on-3 basketball tournament. The Twin Cities hasn’t been home to a GLBT-centric basketball league in approximately five years, and Mill City Hoops hopes to fill that void, at least for gay men and straight male allies. The mission of the league is three-fold: To foster community pride, support healthy lifestyle choices, and nurture and grow Minneapolis’s national reputation. League events will include the Pride Week Shirts and Skins Tournament (which currently consists of twelve teams and will feature a DJ, half-time entertainment, hosts, and a film crew) as well as a 5-on-5 Full Court League that will run from November to March. In addition to the local teams, Mill City Hoops plans to send Minneapolis-sponsored teams to the National Gay Basketball Association (NGBA) tournaments, with the desire to host a national tournament in Minneapolis in the coming years. Brian Woolsey, the Managing Director of Mill City Hoops, explained his reason for bringing gay basketball back to the Cities, and it’s pretty simple: “I love basketball. I’ve met most of my best friends playing and wanted to make that experience available to more people.” I asked Brian how he envisioned the league adding to Minneapolis’s nationwide visibility. “Two ways,” he replied. “First, I hope to send Mill City Hoops teams to national gay tournaments and bring back some hardware! Second, following a successful launch, we intend to turn our attention to hosting a national gay tournament here in Minneapolis. How fun would that be?” With the understanding that many sports leagues can be difficult to sustain, Mill City Hoops has been reaching out to businesses and corporations and have thus far had a positive response. Citing Gallup studies in the sponsorship materials on engaged and healthy workforces which result in increased productivity, the league has a number of sponsors looking to add their name to the Mill City brand. They seek to use the league as a platform for members to inspire one another, and younger athletes, to live healthy lives, reach their full potential, and showcase Minneapolis to the community. Woolsey states what he sees as one of the main differences between Mill City Hoops and other rec leagues: “This is not a beer bust league. We’re promoting healthy life choices: exercise, eating right, etc.” Interested players can still sign up for the Pride tournament by contacting Mill City Hoops via their Facebook page, and can also inquire about the 5-on-5 league. Currently the plan is to organize two 5-on-5 leagues: one for competitive players (high school experience or better) and one for recreational players (all skill levels). Sign-up for each will be in the fall and the location of games is still to be determined. 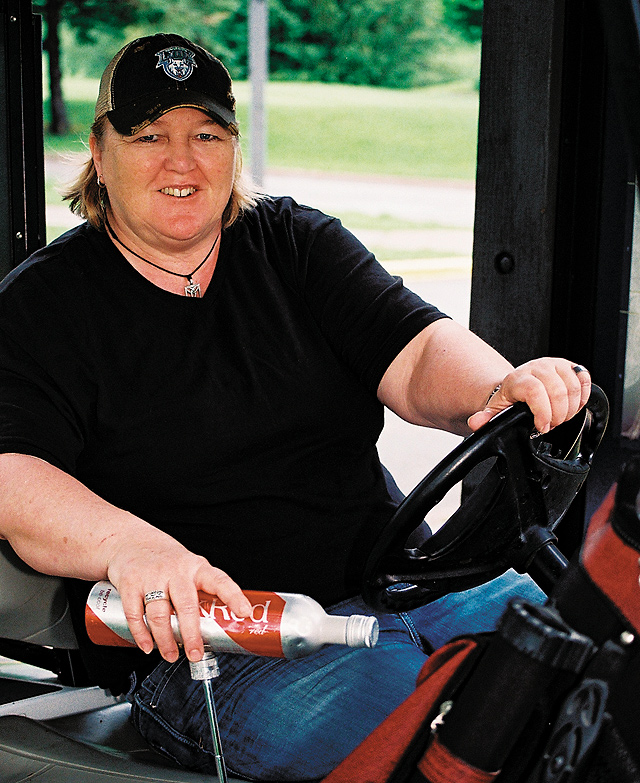 Women’s Pride Golf Tournament The men aren’t the only ones making the most of Pride weekend with a little healthy competition. What began as a handful of lesbians getting together to golf on the Saturday morning of Pride has grown into one of Pride Weekend’s best kept secrets. Michelle Boie began organizing a golf outing with a friend eight years ago and is now herself coordinating and hosting 90 golfers for a day of shenanigans at the Theodore Wirth Par 3 Golf Course in Golden Valley. However, the Masters it purposefully is not, and Tiger Woods might not even stand a chance against these women. “This is not your normal kind of golf!” Boie devises something new and fun at every hole. Past surprises include teeing off blindfolded or with a lacrosse stick “lob” toward the green, or maybe opposite-handed or with a marshmallow replacing the golf ball. And then there are the putting challenges. Sometimes they’d use a wobbly putter, or a pool stick or otherwise modified club. She includes other games for prizes as well, like a softball throw with a golf ball to see who has the best arm. “The golf course has been very accommodating, as we have held this tournament there for the past eight years. With 90 golfers, you can imagine 10 players on each hole, so therefore, we play best ball, have a shotgun start and there are 2 golfers per cart.  We start at 11:00am and we are done by 2:30pm. The Par 3 closes for us from 9:30am to 2:30pm, and we get our own 2 beer cart girls. What more could a girl ask for?” Invites for the tournament have always gone out through Facebook, first to those that have golfed in the past who then forward the invite to their friends. Due to course restraints, Boie limits the number to 90 total golfers, though it is open to all ages and abilities. “I have some great golfers and then I have some women that show up that have no idea how to hold a club.  We share a lot of laughs, enjoy the weather, and come together to celebrate Pride.” After a day on the green, they head to a local bar for food and drinks, and prizes are handed out to the day’s winners. Why does she go through the effort year after year? “I have been told from many of my friends that this is their favorite thing to do during Pride weekend. It makes me smile knowing that I am doing something great for everyone!” 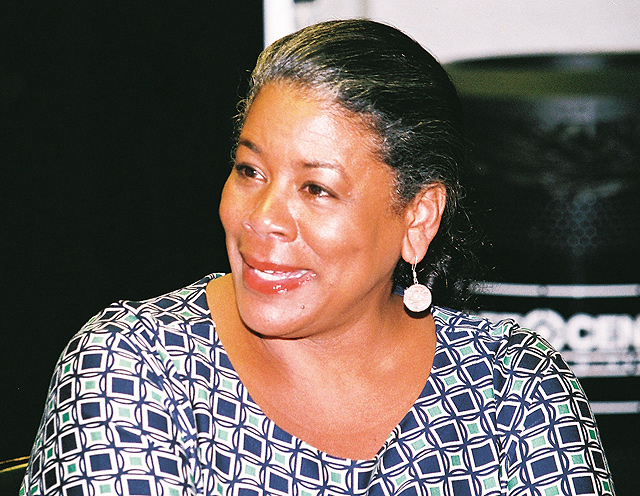 Minnesota Lynx/WNBA Pride While amateur athletes in the Cities are finding ways to display their Pride in June, the best professional team in town is also getting a boost of support from their league during Pride month. The WNBA has announced a special marketing campaign specifically aimed at the GLBT community, finally making the most of the fact we’ve been aware of for years. Lesbians dig watching women play basketball. Attend any Minnesota Lynx game and you’ll find your proof. With this effort, the WNBA becomes the first professional sports league to specifically market to the gay, lesbian, bisexual, and transgender community with a national platform (presented by COVERGIRL) celebrating inclusion and equality. WNBA President Laurel J. Richie states, “The WNBA welcomes all fans, athletes, and partners to our game. These beliefs unite the 12 teams of the WNBA and we are very excited to introduce the WNBA Pride platform which celebrates acceptance and inclusion. The WNBA takes great pride in working with extraordinary partners who share these values, and we are so grateful to our presenting partner COVERGIRL along with ESPN, GLSEN and GLAAD for joining the WNBA on this important initiative.” One of the campaign’s first acts was to debut a new website, WNBA.com/pride, which includes league and team Pride content, events, and schedules. Information will also be shared via social media with the hashtag #wnbapride. In addition, WNBA teams will host Pride-themed games throughout June with players donning commemorative Pride shooting shirts. The Minnesota Lynx Pride night will be Friday, June 20th. The WNBA vows to continue working with a number of leading GLBT community-based organizations, including GLSEN, GLAAD, and Athlete Ally with the hopes of raising awareness of inclusion through public service campaigns and other local activities such as local GLBT Pride festivals and parades. “Some of my favorite memories are courtside with my wife and kids cheering on our favorite WNBA teams. For years, the WNBA has been a leading force in building support for equality on the court and in the stands,” said GLAAD President & CEO Sarah Kate Ellis. “The WNBA Pride platform will raise the bar in helping to end anti-LGBT bias in sports, while also celebrating the tremendous value LGBT athletes and fans bring to the game.” Other notable aspects of the campaign include the Fifth Annual LogoTV/AfterEllen Score Your Seats Sweepstakes, where fans will have the opportunity to win a trip to a WNBA Finals game and advertising with lesbian-targeted outlets. “Every day in the news we see that inclusion is the new standard for our society, and every day we see more and more people reject prejudice and anything that would divide us,” said Phoenix Mercury Center Brittney Griner. “I’m proud to be a part of the WNBA and NBA family that has chosen to embrace the LGBT community, not just for the out athletes like me, but also the allies and fans who love them.” The Lynx, of course, have been marketing to our local GLBT community for years, and with lesbian athletes Seimone Augustus, Rebekkah Brunson, and Janel McCarville playing a large part in the outreach. Be sure to give them your support on Pride Night, June 20th along with Lavender Mag! We’ll see you there!