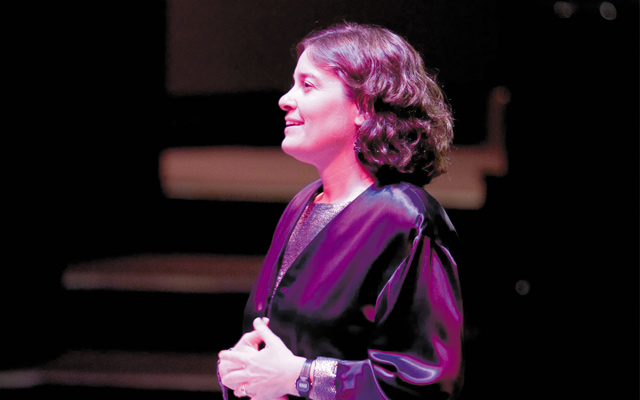 One Voice Artistic Director Jane Ramseyer Miller talked recently with Lavender about the upcoming program and about the Chorus itself.

When did the One Voice Mixed Chorus get its start? How has it grown to be the largest GLBT chorus in North America?

One Voice Mixed Chorus was formed in 1988—one of the first choruses in the country to bring together men and women from the GLBT and allied communities with the intent to unite for a common goal of creating social change through music. The gay and lesbian communities had already begun working together to address the AIDS crisis, which had reached astronomical proportions, and it was clear that further social change was needed.

Today, One Voice is the largest GLBTA chorus in North America. It is comprised of 100 men and women of diverse cultural backgrounds, from ages 17 to 75, drawn together as members and allies of the GLBT community. Being a member of One Voice is a profound experience for many members, affecting their sense of identity and connection to community.

One Voice started growing significantly when we began focusing on our mission of social change in addition to musical excellence. Over 12 years ago, we began taking our music and message of social change into schools around the Twin Cities, and found that these performances had a profound impact on our singersas well as on the schools where we perform. Our outreach is a clear part of our identity and draws many singers into the chorus.

One Voice could not exist without the efforts of its “Fifth-Section,” or the non- singing volunteers [[in addition to Soprano, Alto, Tenor, and Bass], who are a crucial part of the chorus and who contribute 4,000 to 5,000 volunteer hours annually. Our Fifth-Section members do everything from ushering to baking cookies, bookkeeping, web-design and all of our ticket management. Together, we dedicate our time and energy to the One Voice mission: “Building community and creating social change by raising our voices in song.”

How long have you been Artistic Director? Can you give a bit of your background?

I am in my 17th year as Artistic Director for One Voice Mixed Chorus, and currently serve as Artistic Director in Residence for GALA Choruses. I hold a Masters of Music in Choral Conducting from the University of Minnesota and a BA in Psychology from the University of Waterloo in Ontario, Canada. I’ve served as Music Director for several church choirs as well as for TransVoices, Calliope Women’s Chorus, Fierra Voce Femmina, and Voices for Peace–a multi-cultural youth choir.

I especially enjoy creative community collaborations, and have created choral music with 15-Head Theater Lab, The Women’s Cancer Resource Center, Shakopee Women’s Correctional Facility, In the Heart of the Beast Puppet and Mask Theatre, Kairos Dance Theatre, Mu Daiko, Teens Rock the Mic and District 202 among others. My compositions are published by Yelton Rhodes Music and Pilgrim Press.

In 2008 I received the GALA Choruses Legacy Award for conducting, innovative programming and commitment to community outreach, and in 2010 was awarded the ACDA VocalEssence Award for Creative Programming and the ACDA Minnesota Advocate for Choral Excellence (ACE) Award. GALA’s Artistic Artist in Residence.

17 years is a long time for any conductor to survive a community chorus! I think my longevity is due to the strong and compelling mission of One Voice that is visible in every performance and in every community setting where we perform. The chorus has continued to grow artistically stronger every year and I am delighted with One Voice’s programming and sound as we enter our 25th anniversary in 2012!

Tell us more about BraveSouls & Dreamers.

BraveSouls & Dreamers was first composed for the Portland Gay Men’s Chorus. We have worked with the composer to create a new arrangement of the piece for

The new arrangement is set for SATB [Soprano, Alto, Tenor, Bass] chorus, four soloists and a small orchestra with winds, harp, piano, synthesizer and percussion. We have four amazing soloists who are playing the parts of Mother, Sage and two Soldiers. Their voices really add to the power and compelling nature of the music and text.

Is OVation a part of One Voice or a different entity?

OVation is the portable version of One Voice—a small ensemble of eight singers that can bring our music and our message almost anywhere. Over the course of the year, OVation presents roughly 10-15 performances, with One Voice or on its own, at venues ranging from the Minnesota State Fair, Pride, the Minnesota Arboretum… even the Minnesota Liver Foundation!

What is, in your opinion, the most outstanding effect that One Voice has on the community?

Definitely our outreach to greater Minnesota and One Voice’s concerts in schools have had a huge impact in the community. Each fall we rent buses and take our music on the road with 80-90 singers and Fifth-Section members in tow. This past November we performed a concert with Duluth United for All Families in support of their work around the marriage amendment.

On January 9 we are performing a concert in St. Francis, about a hour north of the Twin Cities with 100 youth from St. Francis High School. We rehearsed with these youth in November on our way to Duluth. In these settings there is always a bit of nervousness when we first meet with our chorus and a bunch of youth jammed into risers. But once we started singing it was like the fear and nervousness completely evaporated as 200 voices (youth and adults) filled the room.

We understand you have a new Executive Director?

Craig Coogan, who recently joined the One Voice staff as Executive Director, is an expert in developing strategies and programs to help GLBTA and other nonprofit organizations achieve their operational and artistic goals. Craig brings experience in both the for-profit and non-profit arenas. He was a founding board member and served for ten years as Treasurer of the acclaimed Women’s choral group Vox Femina Los Angeles. He has produced independent movies and several award-winning documentaries and acclaimed original plays. He is a

graduate of Syracuse University which prepared him well for his recent move from Los Angeles to Minnesota!

We are really thrilled to give Craig a WARM welcome to Minnesota! He brings incredible experience in both the for-profit and non-profit sectors and already has fabulous ideas for taking One Voice into our next decade.

Is there anything you’d like to add about your own connection to Brave Souls and Dreamers – It sounds like a marvelous program.

It has been thrilling to work with Robert Seeley in preparing this commission and in rehearsal with the chorus. His music powerfully portrays the wrenching emotions of individuals caught in a state of violence, but even more powerfully offers a sense of hope for a world without violence and fear.

The first time I heard BraveSouls & Dreamers I sat in the audience with tears streaming down my face. Robert Seeley has combined some incredibly powerful texts about the violence of war and the wonder of peaceful community with music that just melts your heart. One of my favorite movements is an aria for the character of a Mother who has lost a child to war. Her grief and anger and angst are incredibly beautiful and hear-wrenching.

Seeley’s writing style draws from classical to lyrical to Broadway styles and is very accessible for both our singers and for the audience. His melodies absolutely float and the orchestration soars in a way that leaves the listener moved and also filled with hope.

Robert Seeley also composed Naked Man and Metamorphosis both performed by the Twin Cities Gay Men’s Chorus several years ago. If you are a fan of those pieces, BraveSouls & Dreamers will blow you away!

Would you share a few others of your Community Outreach Stories?

On Friday, November 18, [2011] 80 One Voice singers boarded a bus to St. Francis High School to rehearse with their 100-voice Concert Choir in preparation for our collaborative concert in St. Francis on January 9. It is always a bit unnerving to enter a new school not knowing how the students will feel about singing with a bunch of GLBT adults.

At St. Francis, the most awkward moment was when we all crowded onto risers with bodies packed in tight. But, then we started to sing; young voices mixed with older voices and the faces of these young people absolutely lit up. We grooved to an African song and then One Voice singers taught the youth “Bismillah,” an Arabic Suffi chant with harmonies that make you shiver. There was an audible sigh from the singers when it ended. The hour of singing flew by and ended with lots of laughter and excitement about our upcoming joint concert.

One St Francis GSA student remarked, “This was the first time I ever got goosebumps while hearing someone sing!”

After the rehearsal, One Voice enjoyed lunch with 25 members of Gay Straight Alliance at the high school and the conversations and camaraderie continued. Educational moments are always just around the corner, and this was abundantly clear during lunch when one young woman from the GSA asked, “now what does ‘heterosexual’ mean?”

From St. Francis we headed to Duluth for an evening Brave Souls & Dreamers concert at Plymouth Congregational in collaboration with Duluth United for All Families, a coalition founded on the strong belief in the power of marriage for all and that is committed to defeating the proposed constitutional amendment denying marriage for same-sex couples. The excitement in the sold-out church was palpable. One of the event volunteers exclaimed, “We loved your music– come back anytime. You can come back for a victory concert after we beat this thing!”

A woman who works as a probation officer approached us after the concert shaking her head and said, “I almost didn’t come tonight because I have had such a hard week. Too many sad stories. Your music filled my heart and has given me the hope I needed.”

Said a mom from Moorhead, “I am 78 years old and I traveled an hour in the dark to be here and hear this concert. My son was basically asked to leave his church because he is gay. I spoke about this at a church meeting. Some people told me I was brave. I was not brave. I was angry and I will keep speaking out and keep supporting my son.”

How does one nominate a Brave Soul & Dreamer?

We invite you to nominate your Brave Soul & Dreamer to appear in a concert slide show as well as the One Voice website. This could be an individual who has particularly inspired you with their words or actions. You can name someone in the public eye or from your community or family, living or deceased. Nominations may be submitted on the One Voice websites at www.ovmc.org