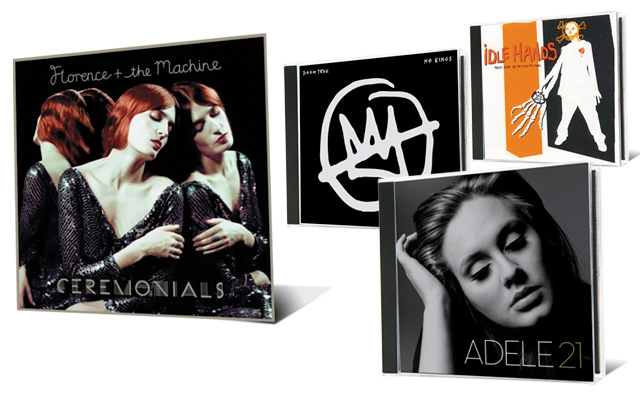 While the presence of the likes of Nickleback, Chris Brown, Katy Perry and the cast of Glee made for plenty of painful listening in 2011, there were plenty of highlights to keep a music lover in a good mood.

The easiest way to judge whether an album works for you or not? How often is it on your turntable/CD player/mp3 player. Helplessness Blues was, far and away, the album I listened to the most through 2011, making daily plays – often first thing in the morning – throughout the summer and fall. The songs are sublime, smart and sport a maturity sadly lacking in the plastic pop that sits at the top of the charts.

2. Fucked Up David Comes to Life

Punk’s not dead, and isn’t ever going to die as long as acts like Fucked Up are around to continually twist the genre around their collective fingers. David Comes to Life is raucous, raw and loaded with raging energy.

3. The Idle Hands Life is Beautiful

Sometimes, small packages have a big impact. This local band’s five-song ep made for steady listening throughout the year, often accompanying me on journeys across the Cities. I’m sure the drivers in some of the other cars were a bit freaked out by my singing of “Socialite Death Squad” and “Uptown Burning.”

Hey, a hit album makes the charts this year. Adele showed no signs of a sophomore slump here, showcasing plenty of ever-maturing material and a gorgeous voice. More importantly, Adele knows how to use the voice to great effect without purely showing off, like some kind of anti-Mariah-Carey.

All-star super groups often are fraught with intrigue and danger – see my “worst of” album below – but the Doomtree collective has such unity in purpose that this feels more like the “home” release from where all of these talented performers branch off onto their solo albums, like the Wu Tang Clan, but with a deeper need to question the hand we’ve been dealt.

Why do I still love music after decades of disappointment? Because you can get something like this; an arty, instrumental post-rock band creating some of the funkiest, fun tunes of the year.

I’m always a bit wary of putting recently released albums on this list, but the latest from the Michelle-Bachmann-baiting hip-hop collective is a driving, powerful release packed with memorable musical and lyrical moments.

R.E.M. doesn’t go out on top exactly – they would have needed to call it quits around the time of Document to do that – but they do leave the business on their own terms, on the back of a string of albums that remind longtime fans what made the Athens trio indie rock ambassadors for three decades.

I’m not sure what planet this comes from, but boy are the skittering rhythms and playful tunes a lot of fun.

We end the top 10 back with some folksy, bluesy rocking material, as My Morning Jacket retreats a bit from their previous sort-of “out there” album for a focused collection of tunes that prove there’s still life in old-style songs.

The Decemberists The King is Dead/Long Live the King

Florence and the Machine Ceremonials

And there is always a yang to the yin:

Look, both artists are decades past their best work, but charging folks for a double album of dull guitar riffs and meandering Lou Reed monologues is close to a crime. Maybe it’s all an elaborate joke, aka Metal Machine Music, except I’d rather listen to 24 hours straight of MMM before ever pushing play again on this turkey.