Off the Eaten Path: The Amsterdam Bar & Hall 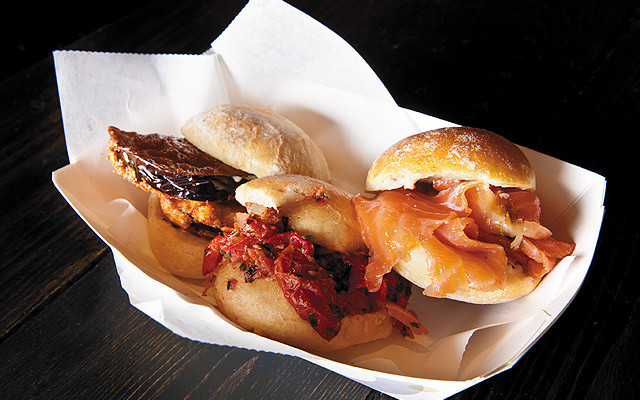 The Amsterdam Bar & Hall draws thematic inspiration from its namesake city, complete with Dutch spirits, traditional pub fare, and a triple X logo, which mimics the city’s flag.   And, somewhat like the former colonial superpower, The Amsterdam attempts to carve out a European oasis in a landscape that’s not quite suited to the task.  The former Pop!! space at 6 W 6th Street in downtown St. Paul has all the structural elements of a stripped-down J Crew, and the Amsterdam’s owners (Jon and Jarret Oulman, also of the 331 club) know it.  Their laudable attempts to Dutch-up–and rough up–the place hopefully will gain more traction with time, and with a new entryway that’s still under construction.  But will this strange oasis blossom into a new east-river epicenter of live music?   I only hope it fares better than that groovy little Dutch colony on Manhattan Island.

A full music schedule can be fund online at www.amsterdambarandhall.com.  But if you just stop by when the mood strikes, expect to find trivia on Mondays, folk and bluegrass during the week, and indie rock on the weekends.  If you haven’t been to the city of Amsterdam, or didn’t stray far from the tourist-trodden paths, you might not fully appreciate the significance of the Dutch “table rugs” that decorate one stretch of wall, and if you weren’t an art history major, you might not even notice that the booths are swathed in Dutch art.   But the high tables that rim the hall are made for mingling and table-hopping, and if the decor lost you, the bar certainly won’t.

For the real Netherlands experience, all you have to do is belly up to the bar, and order the Kopstootje (pronounced Kop-stoo-cha, $8).  It’s a shot of old-school Dutch gin called genever (or jenever), served alongside a glass of Heineken.  Gin and beer together?  Yeah, when it’s the good stuff.   Here’s the history on this one: the Dutch made this hooch by distilling malt wine, using herbs and juniper berries to add medicinal effects and smooth out the taste.  However, kind of like they did with Manhattan, the British completely stole this idea and re-made it into a more white-washed product that they called gin, and then they slapped a picture of a beef-eater on the front. 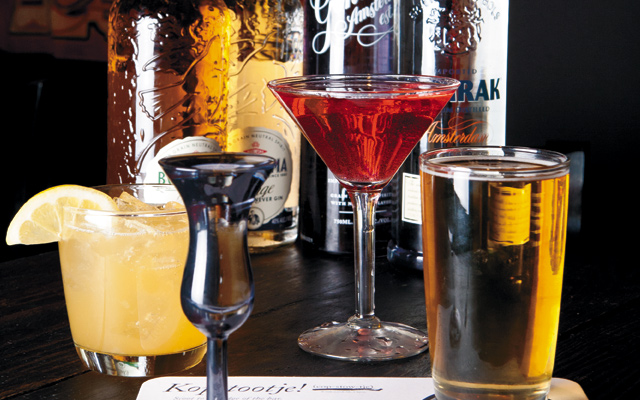 The Amsterdam Bar & Hall stocks several genevers–no small feat.   If you prefer more of a vodka taste with a hint of juniper, opt for one of the “jonge” genevers.  If you like whisky or scotch, opt for an “oude” genever.  The shot is poured to the very top, so the drinker must clasp their hands behind their back, bend from the waist and slurp the first bit.  The rest of your drinking experience is entirely up to you.  Kopstootje actually means “little head butt” in Dutch, but the result is much more pleasant.

After your “little head butt” genever, try one of the Amsterdam bar’s cocktails containing the same.  The Amsterdam ($7) also contains Cointreau, mango and lemon, but it’s surprisingly refreshing and not too sweet.  Also, considering it contains oude genever, it’s unbelievably smooth.  The Rotterdam ($7) is perky and pink, and comes in a martini glass.   But with a masterful mix of genever, St. Germain, cranberry and champagne, it is both lively and complex.

If you need a quick bite, Broodjes are reminiscent of sliders, and the Amsterdam whips up 17 different versions.  We tried the House Cured Salmon ($4.50), the Fried Eggplant ($3.50) and the Roasted Tomato ($3.50), but they also feature a traditional hamburger, and everything from chicken liver mousse to  Dutch cheese.   I thought the fried eggplant could have benefited from the addition of more garlic mayo, but all were very tasty and definitely up to the task. 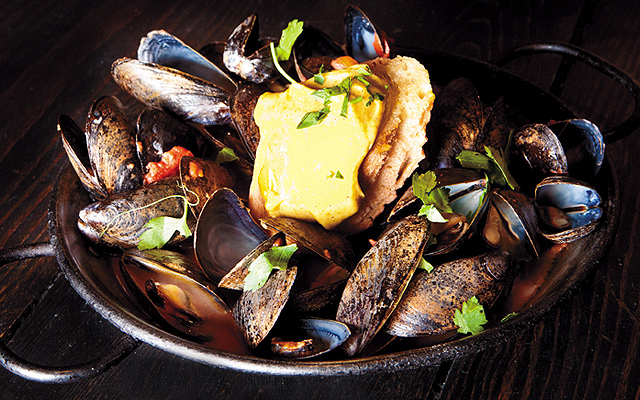 We also tried the Mussels ($9), which are steamed with vermouth, tomatoes and herbs, served with a  hunk of toasted garlic bread to mop up the sauce, and a dollop of truly outstanding curry mayonnaise.  As an appetizer, they’re perfect for sharing with a small group, but as the restaurant doesn’t provide side plates for shells and whatnot, your party had best be informal.  For dessert, the warm Pot Brownie ($4) may not contain any Jane, but more than makes up for it with luscious caramel and rich dark chocolate, topped with fresh whipped cream.  It’s good enough to fake a case of the munchies.

I sincerely hope the Amsterdam Bar and Hall continues to get its footing with the live music crowd.   After all, it was the Dutch who originally brought coolness to the American colonies–why not to downtown St. Paul? 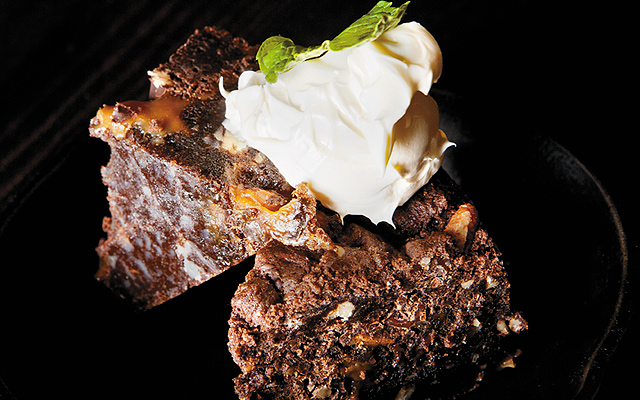