“How was dinner last night? Did you enjoy the theater?” This is not your BFF asking, it’s the hotel staff, following up with “Another coffee to go?”

You know all about Minnesota Nice. This is Winnipeg Nicer, 700 miles north, but with almost tropical warmth in its welcome. Why visit? Three answers: for the arts. For the eats. And to wander the unique neighborhoods. Plus, the intriguing history, far older than our own. 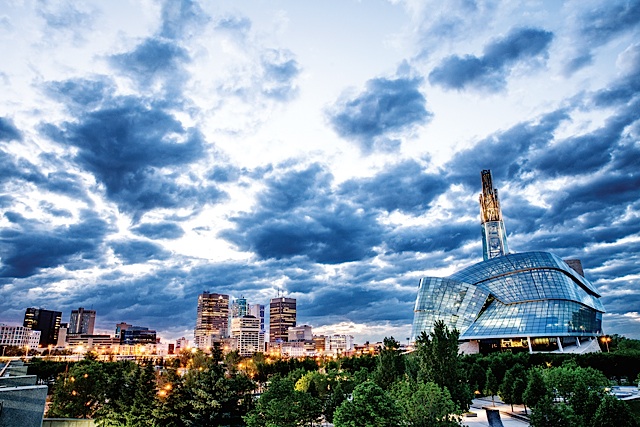 Let’s get started at The Forks, where Winnipeg itself got started, first as the site of an Aboriginal sacred place (“our own Stonehenge”), then a fur trading post where two rivers met, and today a 50-acre festival destination to shop, soak up history, hike/skate/boat the waterways, catch performances, and especially eat. A vast indoor market boasts stalls for all things Canadian, from bison burgers to local beers to legendary cinnamon buns. Among the food stands, my fave is Baba’s Tall Grass Pantry, showcasing the pierogies, cabbage rolls, and borscht of the city’s many Ukrainian kitchens.

Cross the iconic bridge leading to St. Boniface, where the French first settled (still French-speaking today), anchored by its venerable cathedral, which burnt down in 1972, except for its classic stone facade. Today it encircles a modern church bearing amazing stained-glass windows honoring the Native culture, a brown-skinned Virgin Mary wearing moccasins, for instance.

Its cemetery hosts the much-visited tombstone of Louis Riel, a Metis (half French, half Native) priest-turned-lawyer who led the Red River Rebellion for Metis’ rights, later hanged for his part in the ruckus.

Osborne Village, separated by another bridge, hosts a galaxy of hip and happening boutiques and eateries. It’s hot. But the hottest ’hood in the city is also its oldest: downtown’s Exchange District, anchored by Market Square since 1875, when Winnipeg gained its rep as “the Chicago of the North” and railroads made it “the Gateway to the West.” Today its red-brick warehouses and stately former banks from its heyday of 1880 to 1920 are home to over 50 unique restaurants, 60 unique shops, and the highest concentration of artists and galleries in the city, plus Innovation Alley, Winnipeg’s own Silicon Valley. Choose a walking tour (www.exchangedistrict.org) to suit your fancy: history, architecture, culinary, photography. It’s also host to Canada’s largest Fringe Festival. 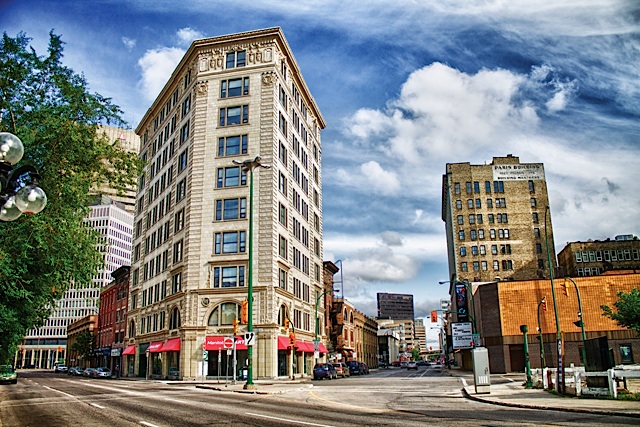 Downtown’s Legislative Building (similar to our State Capitol), built during the 1910s and topped by Golden Boy (aka the Roman god Mercury), was designed by a closet Freemason, a fact undiscovered until 2005 by a modern-day Dan Brown. Take a Hermetic Code tour to sleuth the use of significant numbers (five, 13) in counts of everything from steps to pillars, plus a couple of larger-than-life sphinxes hiding in plain sight.

Up the block stands the Winnipeg Art Gallery, a treasury of Old Masters to contemporary Canadians, but best-loved for its collection of contemporary Inuit sculptures and prints, the largest cache in the land. The museum has just broken ground on a vast new addition to house the Inuit collection. In the meantime, ogle the exhibit of Picassos lent by Canadian collectors.

The Manitoba Museum conveys the province’s history, from pre-Confederation days in the 1700s (when locals urged, “If the English don’t further the development here, the Yankees will,” and proceeded to strip natives of their land and rights: familiar story). Once again we meet Louis Riel, who tried to legislate a Metis Provincial government, and the account of the Famine of 1870, when they were left to starve.

Go back earlier to skeletons of dinosaurs and prehistoric fossils embedded in the local stone. Then visit the Arctic region: displays of polar bears, sled dogs, Belugas, igloos; the wheat fields of the plains farmed by immigrating Ukrainians to feed the nation; and the Streets of Winnipeg, recreating the early days. The show-stopper is a life-sized replica of the sailing ship Nonesuch of 1668 (climb aboard to explore), which put the Hudson Bay Company on the map.

Canada’s path to tolerance is traced in the Canadian Museum of Human Rights of 2014, housed in an iconic structure representing mountains built of local limestone reaching glass “clouds,” signifying a tower of hope. “The idea of the exhibits” that follow a spiral climb inside, explains media relations manager Maureen Fitzhenry, “is to get people thinking and talking, to spark conversation, not to preach nor commemorate. The angles of multiple perspectives should change your point of view.” For instance, such perspectives are those toward the hardship of refugees (from Sudan to American draft dodgers) and the Red Dress Project, representing murdered Native women: “multiple stories, but also hopeful outcomes.” To commemorate Canada’s 150th Anniversary, a special exhibit includes accounts from the LGBTQ community, including struggles of same-sex couples and “what a kid can do” — such as make a high school prom inclusive. 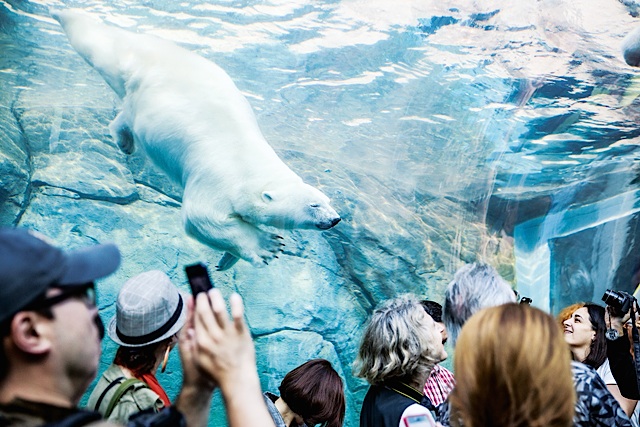 The amazing Assiniboine Park Zoo, centering a 11,000-acre park, places visitors up-close to the province’s northern animals, from rare white bison to cougars; from Buddha-like snowy owls to stately elk and wily mountain goats. Nearby, a pair of Arctic tigers daintily broke ice to wade in a chilly pond. The climax is the Journey to Churchill exhibit, celebrating the polar bears of Manitoba’s northernmost outpost. Outdoors, three cubs and their elders range. Then watch the bears’ swimming antics from a glass tunnel as they plunge, twirl and tumble within inches of viewers, like kids at the beach. It’s almost ballet.

For the real deal, stop in at the Winnipeg Royal Ballet to view a class of these elite young dancers, then a rehearsal (Swan Lake on my visit). Folks can peek into the costume, mask, and shoe workshops too.

To watch the ballet in the kitchen, grab a counter seat at Bouchée Boucher, sporting the hottest new locavore menu in town. Photo-ready courses include a salad of wild purslane topped with quail eggs, gravlax, fresh figs and black truffle oil. Three stars right there. Continue with a crostini as big as your shoe piled with white beans, mushrooms and shaved cheese, or a composition of asparagus, artichoke hearts, cherry tomatoes, and feta spangling greens. Or stinging nettle and ricotta gnudi in Parmesan broth, along with fava beans and spring onions. Or sweetbreads with bacon, capers, and parsnip puree. What’s not to love about a place where the staff wears T-shirts claiming “You Look Lovely”?

Chef Tristan Foucault of Peasant Cookery led the local cured-meat resurgence as well as the pickling parade; both star on his charcuterie plate, hailing Berkshire pork sausages and a dense, marbled pâté garnished with pickled wax beans and cukes. His beet salad, not the same-old same-old, salutes sesame and sunflower seeds, crunchy puffed wild rice, and creamy goat cheese in a caramelized honey vinaigrette. (See what I mean?) He’s the only chef in town to showcase tourtiere, a meat pie of pork and veggies in a pâté brisée crust, straight from a Canadian grandma’s kitchen.

Scot McTaggert pioneered the locavore movement when he opened Fusion Grill in 1996; the chic bistro is still going strong, driven by dishes such as white truffle pierogies with duck sausage and walnut cream sauce, and panko-crusted pickerel cheeks aside beet slaw, and Northern pike caviar, among the starters. I followed those with Arctic char (“It was still swimming at 5:00 this morning,” swears Scot) garnished with parsnip ravioli, spinach, bacon, lentils, leeks, and hollandaise. Or choose local bison, pike, or paella with house-made sausage and Northern pike among the usual suspects. Dessert? Mascarpone cheesecake topped with candied beets. Fusion boasts an all-Canadian wine list, too. 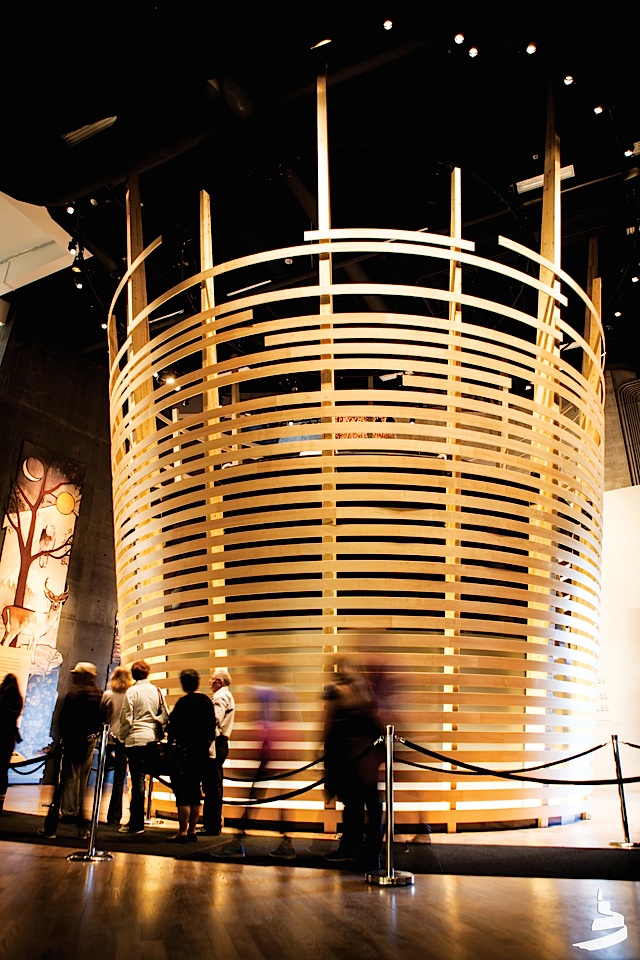 Era Bistro in the CNHR Museum also heralds regional Canadian cuisine. Start with the carrot fries (you’d be nuts not to): crispy spears veiled in a filmy beer batter. Proceed to a creamy chowder of potato, leek, and goldeye (that’s a local fish, folks), or the pickerel po’ boy, or the new-era poutine in a creamy corn and dill gravy. Yes!

Clementine is the hot new bistro in the Exchange District. Prepare to stand in line (it’s worth it) for your chance at smoked Arctic char with all the trimmings; a braised bacon Benedict; or coconut curry mushroom toast. Manitoba goldeye shines again in gnocchi floating in crab and mussel broth and dotted with whitefish caviar at nearby deer + almond.

To plan your visit, see www.tourismwinnipeg.com.

This year marks the 30th anniversary of Winnipeg’s Pride Festival, May 26–June 4. The theme for 2017 is Resurgence. “We’ll observe it in four areas,” says Jonathan Niemczak, Pride’s president: diversity (not only white males); inclusion (reaching out to underserved black and Native communities); safe spaces, through security training; and accessibility, for those with impairments. A cultural shift, Niemczak declares. The parade will recreate the original 2.5 km route of 30 years ago, but pumped up to over 100 entries (www.pridewinnipeg.com).

Even bigger news: mark your calendars for the triple treat in July 2020, when Winnipeg will host the North American Out Games, Canada Pride, and the annual local festivities, to be held simultaneously at The Forks. Expect the city’s two gay clubs to be SRO: venerable Club 200, a downtown bar, and nearby Fame, attracting a younger crowd at weekend dance parties. Reel Pride, the annual film festival, occurs in October.