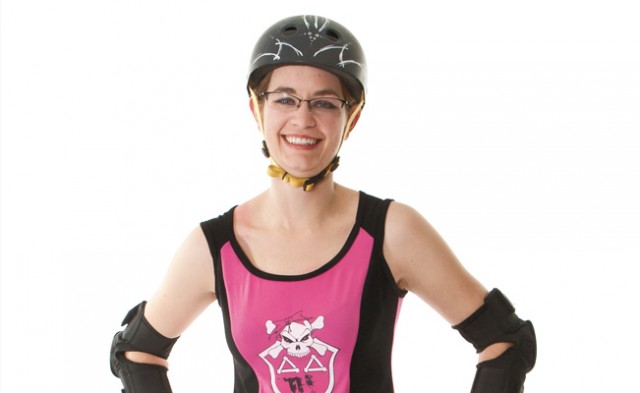 Lavender is starting a new sports column to run in every issue, each time profiling a different athlete who is both in the community as well as in the sports scene.  Our first interview features Rachel Walberg of the North Star Roller Girls.  Read it here but go online to the Lavender website to see video footage of “Balls to the Walberg” at www.LavenderMagazine.com.

Q: What is your derby name?
A: My derby name is Balls To The Walberg and I am number four.

Q: How do you get your derby names?
A: The derby name is generally something that a girl gets when she is in the process of trying out or even just watching roller derby for the first time and says, “I have an idea for the best derby name.” I was brainstorming with my friends the first couple of bouts I went to and came up with some good ones. One of the things is only one person can have that derby name in the world, and there is a database of derby names.  So the first derby name that I wanted, I couldn’t have because it was taken. Then I decided on another derby name that I wanted, and I submitted it to the database, and it was actually taken by somebody who had submitted just before us. I was Googling the name before it all went through, and it was in fact taken by one of the girls in Superior. So she is my arch nemesis now. Not really. But I skated with her and it was fun. So after all that I was very upset and I was talking to my partner, Amanda, and I said, “I just really need a good name!” She is extremely witty and came up with the name for me: Balls to the Walberg. My last name is Walberg. So there we go. It just makes sense.

Q: What can we expect if we come to a bout/roller derby?
A: Well, if you come to a bout you can expect to have a really awesome time. It is a lot of athleticism. The women I play with are extremely dedicated to the sport. A lot of them are new and a lot of them are veterans. I am in my second season now, so I am in the middle of the pack there. I’ve been getting my feet underneath me in terms of that. But what a fan can expect is to walk in and to meet all of the players because we are sort of just hanging out around the door or with the people we know that are coming in. And there are a lot of fun things for families and kids to do. We have a photo booth at every bout that is theme-based because we have a theme for every bout. The last bout was the zombie prom. We had a prom balloon arch and prom crowns, so that is fun. We have a pre-show as well has a half-time show in addition to the excellent roller derby that you can expect. I think that is largely what you can expect.

Q: What’s it like being on the GLBT sports scene and how does sexuality play into it?
A: In general, it is a part of almost everything you do in life in the same way as most aspects of your life are floating around. Everybody is extremely friendly. It is a very supportive environment. It’s nice to have a lot of people around who are nice and accepting and curious about you. I think that is true of any inclusive community. I don’t know if I think that being a part of the sports community is different than being a part of any other community. And I definitely do think that the roller derby is a unique place within the female athletic realm in which is very accepted to be queer and awesome not to be. And they accept you for who you are.

Q: How did you get into being a roller girl?
A: I was actually working a really bad job two years ago and I worked in the evenings so I never had any fun except on the weekends which was when I went to see roller derby for the first time.  I thought, “This seems like the thing I need to do–something that doesn’t make me miserable. I was so happy the first time I saw roller derby. So I went to the Internet and I figured out where I could get involved in roller derby in the Twin Cities. Of course the roller dome is a big location that you can always go skate at. So I got some skates off of a skater and I went to the roller dome and skate around a lot. I was fairly natural at it. Then I quit my terrible job and started to go to the roller dome every night. Then I tried out and got into North Star that year and it was great.

Q: How much time do you spend practicing?
A: Practices are usually available between two and four days a week; they are about 2 hours long. I get to practice generally two times a week. We have a practice minimum just to make sure everyone is keeping up with the athleticism and being safe as they play. We are generally required to practice around four hours a week.

Q: Have you gotten any injuries?
A: I get bruises all the time. I usually have between four and seven bruises on me at any time. But not bad bruises. A lot of people could get worse bruises. My worst injury I’ve had was at a practice once and I took a frontal block to my neck. So, not in terms of neck injuries, but it did compress my windpipe and I had some trouble breathing for a little while. It was really bad for two hours. But I’m lucky to not have been injured badly so far.

If you would like to attend an upcoming bout there are two more this season for the North Star Roller Girls. They are March 24th and April 28th. To get involved, visit northstarrollergirls.com