National Senior Games comes to the Land of 10,000 Lakes

If you love the game, you’re in it for life. For over 10,000 senior citizens across the country, being an athlete doesn’t have an age limit. These dedicated senior athletes will come head-to-head at the 2015 National Senior Games, the largest multi-sport competition in the world for seniors. This year’s games, presented by Humana, will take place in the Twin Cities July 3–16.

Events such as the National Senior Games provide seniors with opportunities to remain active, which have a vital effect on physical health. According to the National Senior Games Association, the baby boomer generation is growing, both in numbers and in physical size. They state, “Much of the Baby Boomer generation currently suffers from obesity-related chronic conditions…a third of Boomers in the U.S. are obese.” Along with the growing problem of obesity, the NSGA discovered through surveys that most Boomers don’t get the recommended level of aerobic activity even though they exercise on a daily basis. 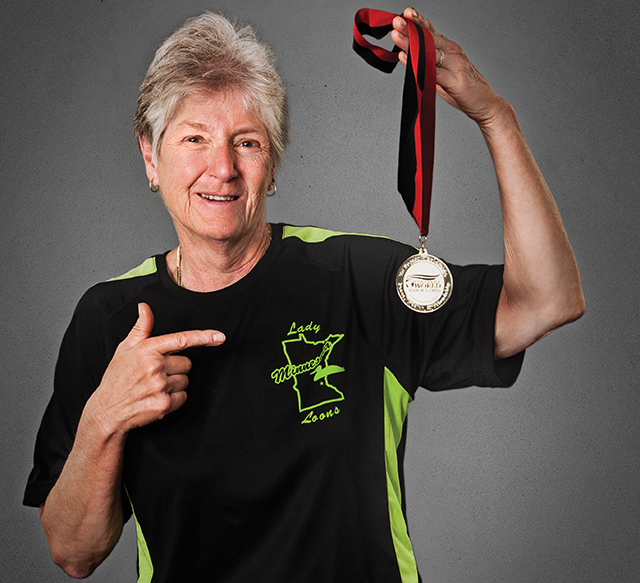 Jan Furuli, 65, out and proud player for the Lady Loons. Photo by Mike Hnida

But seniors can become more physically active and strive to reach their personal best through participating in athletic activities, which also provide a healthy social outlet as well. The NSGA believes that “the Senior Games Movement offers proof that everyone can improve the quality of their lives at any age by staying active.” Participants and fans of the National Senior Games inspire each other to continue to live in good health and fitness, despite society’s assumptions of the physical capabilities of seniors.

More than 800 events are planned for the games, including 19 medal sports and two demonstration sports from archery and table tennis to basketball and triathlon. Participants were required to qualify through one of 51 NSGA sanctioned Member State Games in 2014. Individuals and teams compete within five-year age brackets, from ages 50 through 100+. Though most competitors fall between 55 and 80 years old, there are approximately 100 athletes going strong in the 90–100+ age range, proving that fitness truly can be a lifelong journey.

One athlete representing Minnesota and our GLBT community is Jan Furuli (65), a member of the Minnesota Lady Loons softball team. As a life-long athlete, Furuli picked up a mitt again ten years ago at the suggestion of her partner, a die-hard sports fan, and joined the Metro Senior Softball League. Predominantly a male team, the Metro Senior Softball League gave Furuli an entry point back into the game, but she wanted to find a team that would satisfy her competitive nature.

Then Furuli found the Lady Loons, a 65-and-older women’s softball team. She joined the team one-and-a-half years ago and is able to get even more involved on the field. She notes that while she can’t really compete with the men in the Metro league, she can hold her own with all the talented ladies on the Lady Loons: “These are gals that I can actually compete with and play with. It’s a difference between night and day!”

As a member of both teams, Furuli plays ball several times a week and has experienced numerous benefits of remaining active. “I think my morale is totally boosted; it honestly gives me something to look forward to,” she believes. Being on teams has impacted Furuli’s life greatly, especially since she has joined the Loons. She adds, “I make time for it; that’s my priority now. It’s a team, and you don’t want to let down your team. You want to be part of that success!”

Additionally, as a cardiac nurse, Furuli is also aware of the health benefits of being an active senior. Though she has always been active — enjoying hikes, bike rides, and birding with her partner — she felt herself getting more sedentary five years ago. “I could feel myself getting in a rut, but I knew that I couldn’t let this happen. I needed to keep going and keep moving.” As she became more active, she was able to lose weight and gain some muscle. 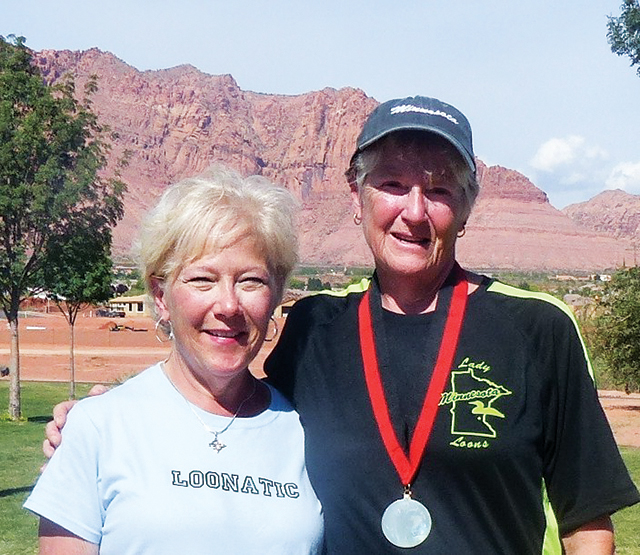 Jan, right, with her partner, in a “Loonatic” shirt. Photo courtesy
of Jan Furuli

The Lady Loons practice once per week and compete in local bar leagues in the cities, often playing against teams comprised of younger athletes. But the ladies hold their own on the field and have only lost one bar game this season. Furuli adds, “You can put our team up against any ‘kid’ team, and we can probably beat them. If we can’t beat them, we will join them!” Competing with teams of all ages encourages the Lady Loons to perfect their game and their team ethic.

All their hard work has definitely paid off: the Lady Loons have won several huge competitions, including receiving the gold medal in the 2015 Minnesota Senior Games and the gold in the 2014 World Huntsmen Classic Games in Utah. They also won the silver medal in two previous National Senior Games, and Furuli believes that this year is their year to win the gold. With the support of their fans, the self-proclaimed “Loonatics”, the Lady Loons hope to play their best and bring home a victory.

In addition to being a force to be reckoned with on the field, the Lady Loons have a strong sense of camaraderie — on and off the field. Furuli notes, “We have a total team ethic. This is a really competitive team, and we play well together. We’re like a well-oiled machine.” The women also host social events and engage in community service projects as a team, including volunteering at local food banks and making quilts for people in need.

Furuli is looking forward to her first National Senior Games with the team. She enjoys how the team plays well together and strives to be the best they can be. “There’s no real pressure, but you are expected to perform. If you make a mistake, you learn from it and go on.”

As the Lady Loons face several women’s teams from all over the country, Furuli will be keeping an eye out for amazing teams she might be able to join in the future once she retires. Furuli’s decision for where to retire will be greatly influenced by the presence of an excellent softball team: “If there’s a women’s team, I’m going to be there. I will not be stopping until I can’t play anymore!”

The Lady Loons and thousands of other athletes will come together for the 2015 National Senior Games presented by Humana in Bloomington and St. Paul, Minnesota. The competition will take place July 3–16 and is free to the public. For more information on how to support these inspiring athletes, visit www.NSGA.com.