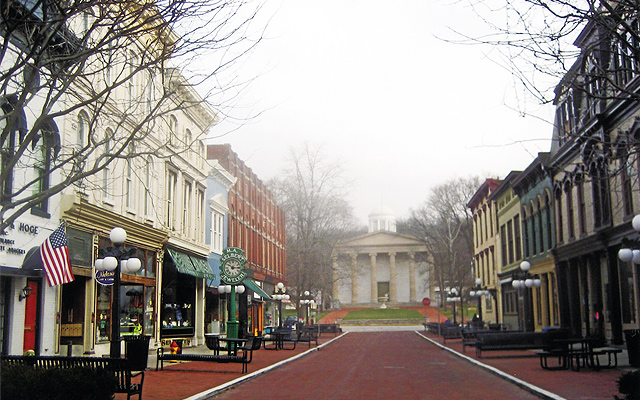 Alas, he’s not. But it’s the room he chooses in the French Quarter Inn when he returns to Maysville, Kentucky for movie premieres and to remember his Aunt Rosemary (whose film also premiered here). She’s got as mural to herself on the grand series portraying the town’s history, including a visit by Lafayette, that graces the floodwalls keeping the Ohio River at bay.

Maysville (pop. 9,500), founded in 1784, is a photo-ready town of brick sidewalks, pillared churches and facades that evoke a kinder, gentler era. But its prime lure is its people. Take Judy and Ron, for instance. They run Magee’s Bakery, where George shows up to order those famous transparent tarts. (Magee’s also supplied the tarts—“a poor man’s pecan pie without the nuts and Bourbon”—for Rosemary’s wedding. Also for Bob Hope. And Barbara Walters.) 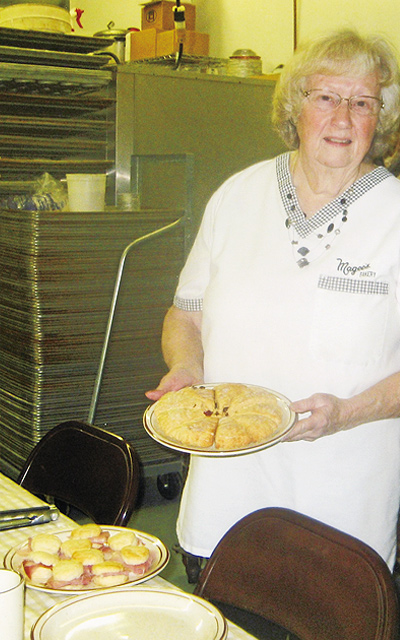 Nona likes her fun, too—the smile that lights her grandmotherly face is your first clue—but she’s also all about making it happen. Nona is the doyenne of the National Underground Railroad Museum, occupying a former safe house with its below-ground sanctuary for escaping slaves before the midnight trip to freedom across the Ohio River. She’s faced her share of racial prejudice, she allows: “The road isn’t always smooth, but you just walk around the puddles.” By a good cop/bad cop process of sweet talk and shaming, she’s strong-armed artifacts into the museum’s domain, from a freed-slave preacher’s black coat to a tobacco press invented by the first African-Americqn to win a patent. Shackles are on view. So is the Slave Boy statue, whose lit lantern was the sign of a safe house to store the “hams” (code-speak for “fugitives”).

The Kentucky Gateway Museum shares more early history, and serves as home for Kay Browning’s amazing collection of miniature rooms, mostly built to 1/12 scale of the originals—meaning candelabra the size of a dime with their teardrop light bulbs and forks as small as an eyelash. Kay opened her collection to view in 2004, explaining, “These things have to be seen!”—including replicas of Maysville’s drugstore, complete with Cokes at the soda fountain.

We break for lunch at Chandler’s, the dining destination for everyone from bank execs to construction crews, celebrating Kentucky icons like smothered chicken, country ham, and the Hot Brown. I’d enjoyed that Kentucky staple at DeSha’s the night before: an open-faced sandwich loaded with country ham, turkey, tomatoes and bacon under a blanket of cheese sauce.

With it I sipped a Bourbon (any other spirit is probably illegal within state lines) from Pogue, which prompted a visit to its Maysville distillery, founded in 1876, in brand-new digs since 2012. Young John Pogue orchestrates a tasting of its twin claims: Limestone Landing, a clear whiskey of malted rye, and Old Pogue, a smooth, smoky sip aged seven years.

Maysville’s “suburb,” Old Washington—a village since 1792—is a living architectural/historical survey, from a log cabin housing 13 kids to the brick church of 1845, where slaves climbed an outside ladder to separate-but-unequal loft seating (indeed, the slave market was held on the nearby courthouse lawn). 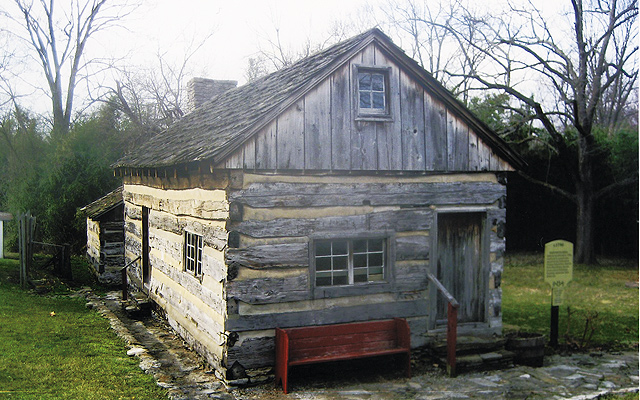 History peels back even earlier at Blue Lick Battlefield State Park, where we over-nighted after surveying the only Revolutionary Army battlefield in Kentucky (reenactments every August)—an unfortunate skirmish in which Daniel Boone took part. Mike, the park’s director, fills me in on East vs. West in his home state: “Western Kentucky has a laid back, Southern attitude, while Eastern Kentucky is all about clan and family, a great work ethic,” he explains as we dine on catfish and Derby pie. Mark Twain had his own way of typecasting the state: “I hope I’m in Kentucky when the world ends, because Kentucky’s always ten years behind.”

He may have had Sam’s in mind. That’s the classic truck stop en route to Lexington, where we breakfasted on eggs, bacon (or choose sausage, country ham, city ham, or fried bologna), grits and biscuits slathered in white gravy.

Lexington is horse country, no doubt about it. It’s blanketed by white fences slicing the rolling bluegrass of horse farms, 450 of them, anchored by barns that put many a mansion to shame. In fact, we brake for one called Old Friends, launched by a couple of Boston ex-pats with the quixotic mission of saving thoroughbreds from the glue factory—in other words, a retirement home for champs such as Little Silver Charmer, age 25, pulled off the slaughter truck, and Afternoon Delight, owned by Burt Bacharach, along with 48 others onsite, who canter our way as soon as they spot the pail of carrots.

We then tour Keeneland Race Course, where fans flock to watch training sessions and races, such as April’s prep race for the Derby. Its breakfast café draws everyone from racing moguls to us wide-eyed voyeurs.

Save room for lunch at Lexington’s new hot spot, Shakespeare and Co.—despite the grand Elizabethan name, it’s decorated like a Middle-Eastern bordello. Um—why? Because it’s the replica of the same-named bistro in Dubai, whose sheik also owns three horse farms here. Maybe it’s those watermelon martinis….

Lexington itself is all about its favorite son, the politician Henry Clay—senator, Secretary of State and Presidential candidate. He’s also called The Great Compromiser—maybe because on his stately home, Ashland, which we tour, he owned 50 slaves, yet spoke out for Emancipation. Union troops were stationed here, and the Battle of Ashland was fought on his front lawn. 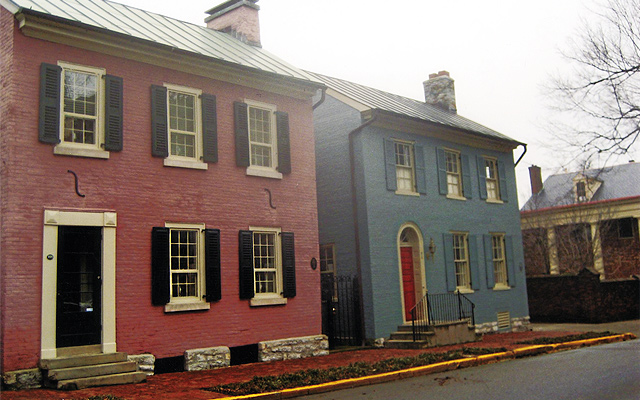 More of Clay in Lexington’s historic district: his office, his church, his alma mater. They circle Gratz Park, which reminds me of an enclave of Old Boston: brick houses, walled gardens, a monumental Carnegie Library anchoring one end and at the other, the campus of Transylvania University, whose students included Jefferson Davis and Cassius Clay.

Gratz Inn is home to Jonathan’s, so named for its forward chef, who reinvents Kentucky’s cabin cooking: Think Bourbon-braised short ribs with collard greens; the best shrimp and grits of my lifetime; and the Hot Brown deconstructed into sliders anchored by a sea scallop, all backed by a list of Bourbons that just doesn’t quit.

On to Frankfort, the capitol, where yet another version of the Hot Brown is on offer at Serafini’s, facing the stately, white-columned Old State Capitol. Don’t miss the sweet tea-marinated pork chop with sweet potato-Brussels sprouts-and-bacon hash, or the balsamic-kissed fried green tomatoes with bacon jam.

Art galleries blossom alongside Serafini’s, but the most popular art form is found at Buffalo Trace, tracing the path of a grain of corn to a sip of Bourbon since 1787. After a tour, we get to taste: Eagle Rare, a rye-based 10-year-old single-barrel Bourbon, and the flagship Buffalo Trace, a small-batch Bourbon aged over eight years. That’ll assure sweet dreams, as if I needed any such prod at the antiques-laden Meeting House B&B and cafe, which Rose and Gary, more Boston transplants, have updated an abode of 1836 (“My dream, his nightmare,” Rose admits, fueled by the 450 gallons of paint involved in the transformation).

“Live and let live is the mantra here,” says James Clark, who runs LEXARTS—hired in part, he claims, because he’s gay and diversity is welcomed here. Maybe because of the arts, maybe the colleges, whatever, it’s “a safe haven, all fagged up,” he declares. “We have a gay mayor, and our Pride Parade is shockingly large.”

The Bar Complex—the oldest gay bar in the South, with dancing, drag shows and lounge under one roof, designed by the team behind Studio 54

Crossings: Drinks specials while you boogie