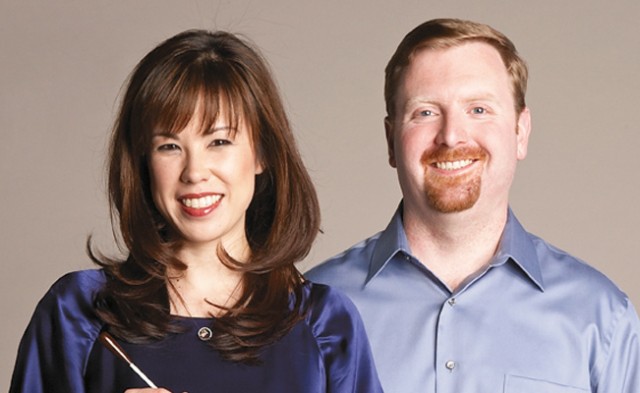 Think that the Minnesota Orchestra is just for blue bloods, all duded up in white tie and pearls? That you have to have had decades of music lessons under your belt to tell one dead composer from another? Or, actually enjoy them, without wondering when you’re supposed to clap?

Think again. That might have been your granddaddy’s concert-going, but nowadays the Orchestra boasts a listener-friendly persona—particularly in its intriguing Inside the Classics series. Orchestra violist Sam Bergman acts as host (he doesn’t wear a tux), tag-teaming with stylin’ young conductor Sarah Hicks (neither does she), bringing what’s likely to be a young, new audience up-close and personal with a particular piece from the Top of the Classics chart.

In the first half of these informal evenings, Sarah chats about the night’s selection, calling on various players to demonstrate her observations. Sam joins in, talking about the composer, what he (it’s usually a he) was up to, who influenced his style (which Sam asks players to demonstrate), and why it’s found an abiding place in the repertoire—inviting the percussionist, perhaps, to tell folks how he prepares for his big bang, or asking a violinist how the heck she can move her fingers that fast.

Then, after the intermission, all the bits and pieces come together with a straight run-through of the number—in which, by now, you know what to listen for like a pro.

Spring’s Intro concerts, March 30 and 31, take this format a step farther—and even more user-friendly, some might say. It will feature the world premiere of a piece by young Chicago composer Judd Greenstein, whom the Orchestra commissioned to write for them. Now, usually commissioned pieces—rather a rarity, and not cheap—are paid for by one or two wealthy donors ponying up. But last season, Sarah and Sam, pleased with their Intro’s populist format, came up with the idea of a symphonic piece being commissioned by—and paid for by—this very group of mostly first-timers. They asked Intro audience members to become micro-commissioners by contributing–by check, by email, or tossing a dollar or two in the cello case—to fund a new work.

Voilà: $20,000 was raised by 400 first-time donors. The result is on the March program, and Judd will be here to talk about the exciting process. Tickets begin at just $20.

Now that you’re feeling at home in the hall, consider returning for what Director of Public Relations Gwen Pappas recommends as another easy-listening concert, when Maestro Osmo Vänskä leads the Orchestra in Beethoven’s Symphony No. 6, the Pastoral, April 11-14. Why?

Says Pappas, “Vänskä and the Minnesota Orchestra have won awards for their Beethoven repertoire, so—as an infrequent concertgoer—start with the best! It evokes life in the countryside; you can hear the thunderstorm. It’s a good ‘entry’ piece.”

Then return for the June 14-15 concerts, which she calls “a walk down memory lane.” Before the hall is closed for renovation next season (the Orchestra will perform in the Convention Center), it’s offering a recap of its musical history since the hall opened in 1974. Along with Osmo, the Orchestra’s other conductors will take part: Sarah Hicks of Pops fame; Andrew Litton, who helms Sommerfest; Irvin Mayfield, the jazz go-to—even a return of Conductor Emeritus Stanislaw Scrowaczewsky, who held the  baton the year the hall opened. “It’ll be a variety show—very entertaining,” Pappas promises. Rush-line tickets are generally available starting at $20 for some of the best seats in the house. Or, first-timers can get two tickets for only $10 for selected concerts. For info, visit www.minnesotaorchestra.org.