The Little Mermaid – Under The Boardwalk 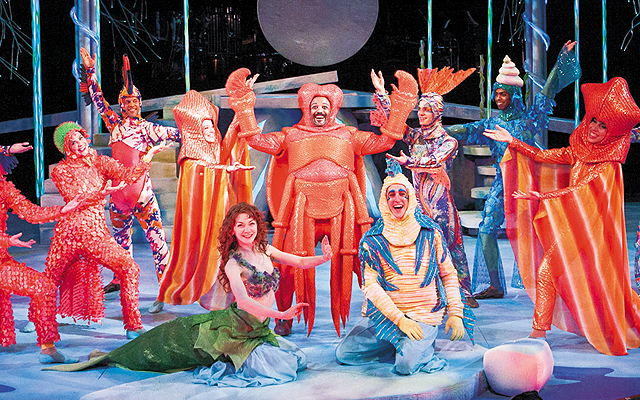 Gotta love those tap-dancing seagulls; they stole the show. But then (full disclosure) I’m a theater-goer who seeks mental as well as visual and emotional stimuli in a show. Give me Tyler Michaels in Cabaret. Here he is, a few months later, on a different stage in the Midwest premiere of Disney’s The Little Mermaid. As male love-interest Prince Eric in Chanhassen Dinner Theatre’s new production, it’s his job to look pretty, sing sweetly, move gracefully, and wrap the willing audience around his little finger. And he succeeds.

As does Caroline Innerbichler as Ariel, the sweet and spunky mermaid who risks her limpid voice for love. (Care to guess the outcome?) She’s picture- (and sound-) perfect in the role, an auburn-haired ingénue who radiates sweetness and sincerity in the role many a pre-teen girl (there were many in the audience) embraces.

The plot, adapted from the classic Hans Christian Andersen tale of 1837 as Disneyfied for an animated 1989 film, reached Broadway in 2008 with songwriter Alan Menken’s film numbers augmented by ten new songs for the stage musical—melodies which (unlike Cabaret) I could not remember the next morning.

But Chan is not about political theater. My favorite Dinner Theatre show of recent years was Hairspray, which didn’t sell as well as Mermaid’s projections, and an organization of 45 years’ enviable strength in production values and audience support proves they’re doing something right for many, many fans.

In the current show, that “something right” leads off with costumes by Rich Hanson. Beyond those plump, yellow-beaked seagulls, led by Jay Albright’s comic touch, you’ll find flounder, starfish, dolphin and a full-of-himself, Calypso-leaning, bright red crab in a heavy-handed (-clawed?) performance by Andre Shoals. Chan regulars take on their undersea personae with confidence and skill, as in Keith Rice’s majestic, resonating King Triton, Ariel’s Daddy-knows-best father, and Kersten Rodau’s wickedly snarky, many-tentacled Witch Ursula. They’re embellished by a talented song-and-dance team who run around waving flags (less wow-inspiring choreography in this show than customarily—but hey: They don’t have feet, do they?). The hazy blue of the underwater world requires little in the way of set design, leaving Andrew Cooke’s lively band to orchestrate the mood with clarity and style. But ultimately, the success of the evening rests on the enchanting shoulders of Ariel and her Prince, who make the show. The production continues through August.