How Shakespeare Challenges the Institution of Arranged (Heterosexual) Marriage 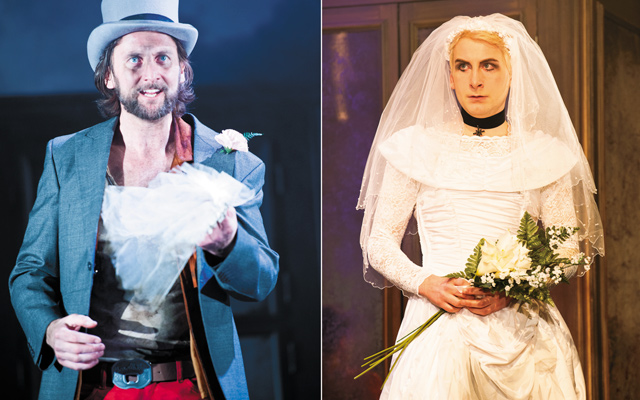 Definition of DOWRY: the money, goods, or estate that a woman brings to her husband in marriage.
-The Merriam-Webster Dictionary

Those who extol traditional marriage as based on love between a man and a woman fail to acknowledge that such love, which is romantic, is actually a comparatively recent historical development in the evolution of the definition of marriage. In fact, marriage traditions for most of human history have had little to do with love. For centuries, if not millenia, marriage has been a matter of parents, fathers in particular, using their offspring as bargaining chips to increase their wealth.

In the late 18th and 19th century there were various figures like Mary Wollstonecraft, the participants at Seneca Falls, Jane Austen, the Bronte sisters, and Georg Eliot, who shook up the marginalized place that women of all classes were held in. And in the first half of the last century figures like Lucy Burns, Alice Paul, Eleanor Roosevelt and Simone de Beauvoir built on their foremothers. To point: (and conservatives hate hearing this) feminism opened the door to equality between men and women and heightened the real possibility of romantic love between the two. By the mid-20th century arranged marriage was pretty much a thing of the past, at least in the West. Thank our feminist foremothers for that.

However, it must be remembered that the major cultural figure who dealt arranged heterosexual marriage a profound and enduring assault centuries earlier was William Shakespeare. In the bard’s time, only men were allowed to act on the stage, therefore, women’s roles had to played by men. London’s superlative Propeller troupe, an all-male ensemble, is now playing the Guthrie Theater with Shakespeare’s often misunderstood and savage satire on arranged marriage, The Taming of the Shrew. Director Edward Hall has staged a serious text-based inquiry into what these characters are from both and interior view and from the social exterior of the time in which it was written. This is not some dinglebatty camp show. In today’s Post-Sexual Revolution world, it’s not only a great window into the archaic tradition of arranged marriage but a marvelous example of crossgender performance. I spoke with the production’s splendid lead actors, Vince Leigh who plays Petruchio and Dan Wheeler who plays Katherine aka Kate.

JT: Shakespeare was profoundly critical of the institution of arranged marriage and that really comes through in The Taming of the Shrew and your performances.

VL: The very fact that Petruchio turns up in a foreign town and says I want to marry money and then the men sort that all out. And then he agrees before he even meets Katherine. It’s what’s my dowry? What’s this? What’s that? Okay, that’s acceptable. I’ll have her. The wooing scene is actually irrelevant. It’s just a bit of witty foreplay.

DW: She’s been commodified. It’s almost a slightly sort of bittersweet fact that they kind of get on quite well in that scene, but that becomes an irrelevancy, like you  say, it wouldn’t have mattered if they hadn’t got on. Your father has consented that you will be my wife.

VL: Your dowry agreed on.

DW: I think the play is an example of what happens if you follow that through to its most extreme conclusion, where a woman has to marry against her will; or perhaps if any two people forced to marry each other when they don’t necessarily love each other.

VL:The basis of all those societies where dowries are, it’s no longer a personal choice. It’s purely for business.

DW: When a person, in this case, a wife, is part of a financial transaction, she’s going to be treated like a piece of property. She’s sort of subjugated until she has nothing left. Her personality is almost removed. That’s not part of what’s required of her.

JT: Kate is so often, too often, played for easy fun as a trashy, belligerent woman. But she is dehumanized by what is going on.

DW: We talked alot about this and I was saying to someone the other day: I think that having done this play this way, I would now find it hard to be part of a production of The Taming of the Shrew that played it for laughs and tried to present a happy ending because I think that would be a cop out. Not the truth of the situation.

VL: It’s not how it’s written. It was written in a time when women were commodified. In that society (there were) dunking stools. And if someone spoke out: ‘we’ll teach you! we’ll take you down the river and get all the people to watch you.’

DW: People get caught up in this thing where if you accept The Taming of the Shrew the way we play it, then that says something terrible about Shakespeare, that he condones  this sort of relationship and he’s written this and you’re supposed to laugh at domestic violence. And I think that’s absolutely not the case because he writes so many strong-willed woman who do make a happy ending for themselves and very equal relationships. Like the one I always use is Beatrice and Benedick and they have a wonderfully equal relationship and people seem to come to see The Taming of the Shrew and go away thinking, well I really wanted to see Much Ado About Nothing. It’s a different story.

VL. Because he’s not condoning the behavior. He’s absolutely exposing the patriarchy for the bullies and for the cruel way they were treating (women) in the time that it was actually happening.

JT: Even in centuries past The Taming of the Shrew was held up by some as immoral because of its supposed mean-spirited representation of a woman. Any thoughts on how people got so off track from what this play really says?

VL: At the time it was first viewed it would have been seen as almost a quite liberal play.

DW: I imagined people would have laughed at the end, as opposed to our audience, that (are) sort of stunned into silence. But I don’t think them laughing at the end would have indicated that they thought the situation was right. And I think maybe we just got a little bit confused, or did a couple of hundred years ago, about the difference between a comedy and a tragedy: (the idea that) in a comedy everything has to be funny and it has to have a completely happy ending. So how do you make it a happy ending? Well, (then) it becomes a misogynist play. But as long as you accept that it’s a play where there are laughs. And it ends with a marriage, which I think is just a classical interpretation of a comedy: it ends in a marriage.