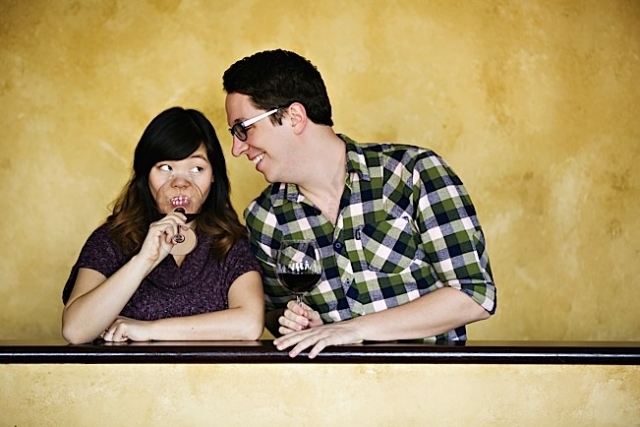 Photo by Lauren B. Photography.

Fruit Fly: The Musical is an autobiographical work about the friendship between straight woman Sheena Janson and gay man Max Wojtanowicz. It began in 2010 as a Minnesota Fringe Festival hit and was developed by Illusion Theater’s Fresh Ink series. It now emerges as a brilliant full-fledged two character musical with its original writer-performers. Director Nikki Swoboda brings a fabulous flair to the performance style while guiding the pair to mine the frank emotional content courageously in the show’s actual full-length premiere at Illusion.

Fruit Fly recounts the friends’ relationship since adolescence up into at least their 20s. Of course, such an account must take us through the obligatory coming out process and that standard bond between gay men and straight women known as the musical. But it goes deeper than that as it illuminates serious concerns that happen after the initial coming out process is done. We see how Sheena’s first true heterosexual love stirs up jealousy in Max. This leads to estrangement and both try to find replacements – these scenes are both hilarious and wrenching. The honesty with which gay loneliness and the potential for bitterness is viscerally portrayed with scenes dealing with gay male misuse of alcohol and easy sex.

Fruit Fly also reflects a scrupulous and inspired attachment to the style of musicals such as those of Ebb & Kander, Burton Lane, and Stephen Sondheim. Composer Michael Gruber clearly has a profound spiritual affinity with that and most of his tunes are simply smashing. Moreover, the songs unflaggingly support the story and the chracters’ mental-emotional states. This is also served by Jill Dawe’s sparkling piano accompaniment.

Fruit Fly is Off-Broadway caliber and really ought to be marketed everywhere. Not only is it first rate as a production but it has wide audience appeal that will illuminate glbtq and straight folks alike, even those you’d think would be resistant to its content. The Illusion staging runs a little over 75 minutes without intermission. It’s about the maximum reasonable amount of sitting time for most audience members.