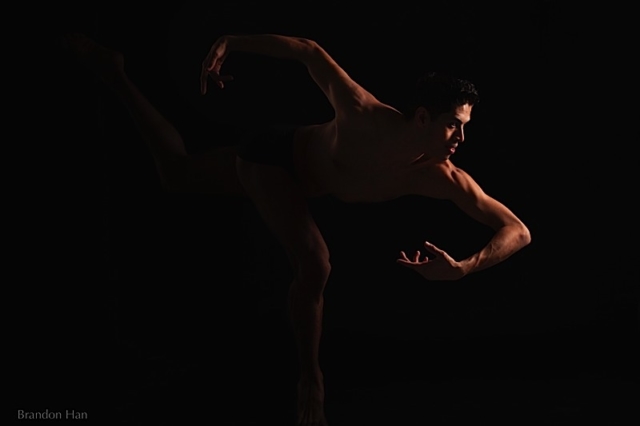 Gabriel Mata is an extraordinary dancer whose Out of the Shadows combines spoken personal stories about his marginalization as a Mexican and as an artist. The Zenon Company dancer and instructor developed much of his aesthetic in California with topnotch choreographers and this Fringe Festival offering at Intermedia Arts is a wonderful opportunity to see this man’s beguiling work.

Mata breaks down the invisible wall between the audience and the performer (what’s called “the fourth wall”) and relates upsets about certain immigration attitudes and homophobia. That said, he also shares how he gets past the anger and despair about such things through elongated movement that seem to utterly stretch into the upper air. To watch Mata, is to actually feel like you are getting beneath his skin and stretching with him.

Out of the Shadows is an ingenious mixture of anti-traditional stage concepts, bold sensuality, and an exquisitely modern dance approach that clearly echoes ballet and classical form. This is the sort of performance that dance devotees will adore. However, those who would never even consider attending a dance performance but took in Mata’s work would likely be astounded at just how thrilling dance-well-done actually is. Not to be missed.

Out of the Shadows
Through Aug. 13
Intermedia Arts, 2822 Lyndale Ave. S, Minneapolis
www.gabrielmata91.wixsite.com/dance or
www.fringefestival.org