Finding Your Voice: How The Minnesota Boychoir Helps Young Men Discover Their Identity

What each of us does to commemorate Pride varies. Some stroll through Loring Park during the festival while, for others, it’s gathering with friends over brunch. For the entire GLBTQA community, Pride serves as an annual check-in. We reminiscence over how far we’ve come and rally together to battle for inclusion and basic rights. Pride is an opportunity for those looking to be a part of something bigger to make an impact as a united front. It allows those struggling with their identity to find their voice. 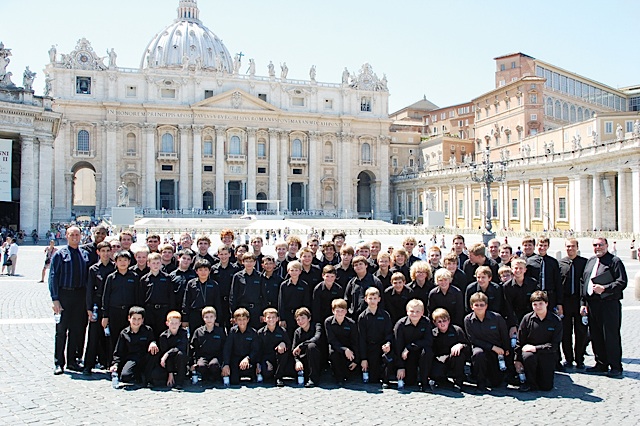 The Boychoir at The Vatican, 2011. Photo courtesy of the Minnesota Boychoir

The Minnesota Boychoir’s motto of “helping boys find their voice” is exactly what they have done for 54 years. The nonprofit serves young men seven to 18 years old from Minneapolis, Saint Paul, and over 40 suburbs. And similar to what Pride does for the Lavender community, the Boychoir strengthens individual voices to create a unified sound that changes lives.

Isaac van Bruggen is an alum of the Boychoir, first joining in sixth grade and singing through graduation from Irondale High School. Through the organization, he performed on a cruise to Alaska and went on a whirlwind tour to Toronto, Ottawa, Quebec City, and Montreal. On his 16th birthday in 2007, van Bruggen and fellow Boychoir members headlined a concert inside the Sydney Opera House in Australia. And, for Isaac, the Boychoir was a safe haven.

“The Boychoir was the one place outside of my immediate family where I felt like I could be myself 100 percent of the time. It allowed me to explore who I am and gave me a space to reveal new sides of myself without fear. A big part of this journey was seeing successful gay adults; something that, at 17, I knew was possible, but was still a scary thought. That was huge.” 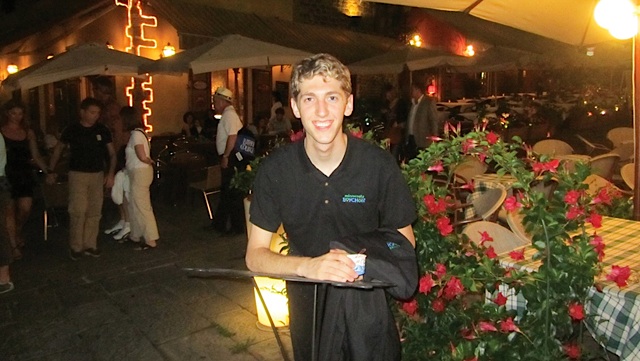 When Vanya Voskresensky struggled with the coming out process as a ninth grader at Mounds View High School, Boychoir families were there to provide what many teens take for granted.

“Coming from a family that doesn’t talk about the subject or asks ‘when will you propose to her’ each time my girl bestie visits, I needed a family that was able to accept and help me. With extremely limited support from home, I turned to the Boychoir family for help. I didn’t realize the mess I was in. Parents of other members saw my challenges and I was offered a job at a family restaurant, beds to sleep in and homes to stay in, and offered the acceptance I missed at home. I don’t know of any other organization that would provide as much support and love in times of need as this one. Now, I give back as much as I can. It’s the least I can do. The least.”

Voskresensky, who was in the Boychoir for eight years, now is a chaperone on music retreats and tours, including this year’s trip to Kansas City. He’s serving as a role model to current members.

The winning formula of creating community spanning generations is developed by Executive and Artistic Director Mark Johnson, who started with the Boychoir in 1992.

“Our family community is so close, tight-knit, loving, and supportive that everyone can immediately feel like they can contribute and be a major part of the overall success of the organization. The music is the foundation to building great people. The fact that you sing for yourself, you sing for your brothers on either side of you, and you sing to represent the Minnesota Boychoir is a powerful motivator and common denominator in our community.”

The young men on stage come from all walks of life: queer and straight, football players and math team members. And the Boychoir is honored to welcome GLBT families in the community. Deb Horne and Amy Rouillard enrolled their son, Max, when he was seven years old. 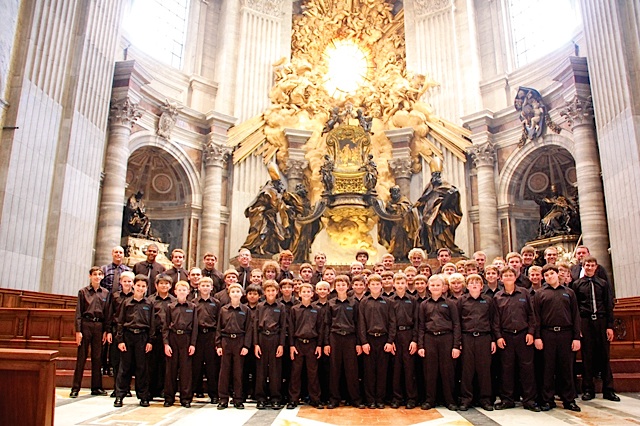 Inside St. Peter’s Basilica at The Vatican, 2011. Photo courtesy of the Minnesota Boychoir

“The Boychoir has been a safe and welcoming place for our family. Not only Max, but our whole family has found a place within the organization and celebrate the successes of the choir. Max is growing in confidence and skill, extending himself in new situations musically and theatrically. It has meant seeing him have the opportunity to perform in many different settings and with many different musical groups.”

The Boychoir’s résumé boasts many accolades. In 2011, members were invited to sing during Mass inside St. Peter’s Basilica at the Vatican, which requires an elaborate application process. Annual collaborations with the Minnesota Orchestra now dot the calendar: last November, the two groups brought the soundtrack of the classic 1990 movie Home Alone to life on stage in downtown Minneapolis.

To celebrate the organization’s 55th anniversary next season, choirboys will embark on a 14-day trip to Spain and France. They’ll also headline a concert at Orchestra Hall in June 2017. That’s in addition to publishing new albums. 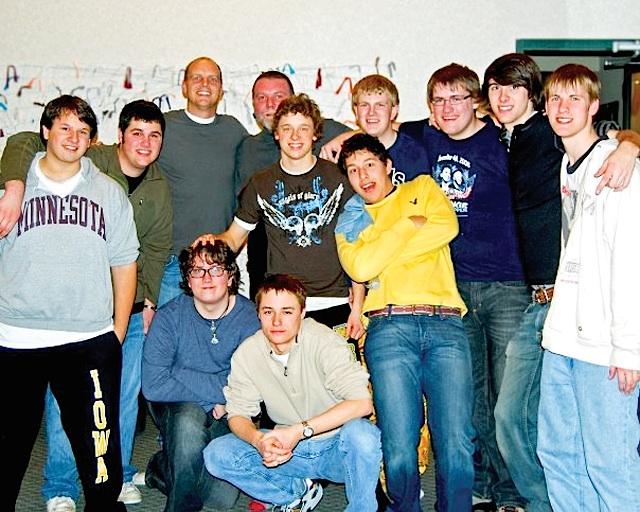 Seniors at WAPO with Mark Johnson, including Isaac van Bruggen, third from right. Photo courtesy of the Minnesota Boychoir

Accompanist Todd Price first played alongside choirboys in 1999. He has played piano in the Twin Cities for over 25 years and, to Price, the choir breaks stereotypes and provides unique opportunities to the community.

“While gender roles have certainly shifted in recent decades, most people still don’t expect boys to create such beauty. But what sets our community apart is that while everyone auditions, no one is turned away. If the boy wants to sing, regardless of ability, he earns a spot in the choir,” Price says. “And when it comes to our audiences, again, all are welcome. There can’t be too many other major arts organizations in the state, or even the country, that don’t charge for admission.”

Price and Johnson not only teach members how to read music and sing with emotion, they instill lifelong traits that turn these boys into outstanding men. Those skills naturally launch members into leadership roles at their respective schools and the rest of their lives.

“I don’t remember most of the songs we sang, but I will always remember Mark teaching us how to carry ourselves in public, in different cultures, in our private lives. The Boychoir taught me how to be proud of myself and stand up for my beliefs,” van Bruggen said. “The lifelong camaraderie and fellowship that the Boychoir provides is second to none.”

That’s due to the passion of Mark Johnson. “I need to be a trusted and respected adult in their lives that shows compassion, emotion, interest, and constant support through this sometimes difficult and awkward time in boys’ lives,” Johnson adds. “There is a palpable power you feel from the piano to the rehearsal seats, from the podium to the choral risers, that we are in this together. We are all doing something we love with people who we love and care about, and that feeling and power leads to even greater music-making and appreciation from those who experience the Minnesota Boychoir.”

If music be the food of love, sing on.

Mike Marcotte is an alum of the Minnesota Boychoir, singing in the organization for seven years. He currently serves on their board of directors.

Members of the Boychoir will perform a free concert on Monday, June 27 at 7 p.m. in Graebner Memorial Chapel on the campus of Concordia University, Saint Paul. The concert concludes the choir’s tour of Kansas City. A freewill donation will be collected.