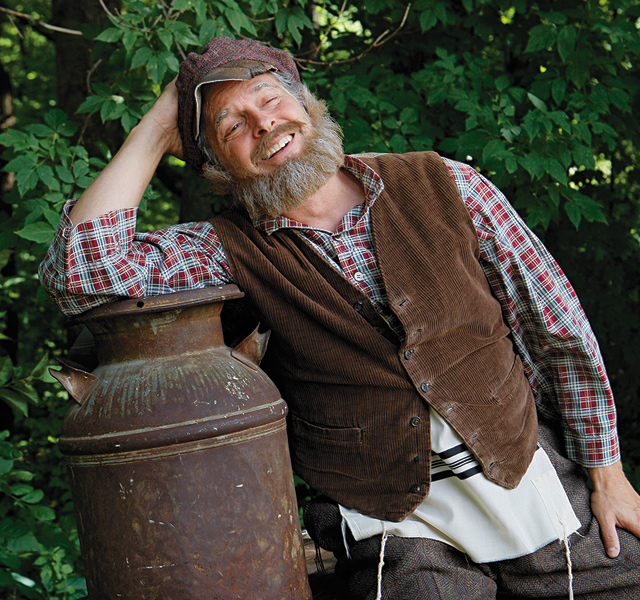 Fiddler on the Roof. Photos by Michal Daniel

Here’s one “Tradition” I wholeheartedly endorse: the return of “Fiddler on the Roof” to the Chanhassen stage. This is its fifth production here, returning for the 50th anniversary of its Broadway debut after an absence of 20 years.

The musical begins—no, that fails to describe it—explodes onto the stage with “Tradition,” performed with the force of a cyclone. And immediately we’re swept away, caught in the klezmer-like music, the bittersweet, minor key of that haunting, Eastern European Jewish music, interlaced with more dreamy numbers like Golde’s poignant “Do You Love Me?”

Drawing inspiration from Russian Yiddish writer Sholem Aleichem and whimsical Russian painter Marc Chagall, the story is the enduring one of balancing the dear traditions that knit folks together as a besieged community with the need to embrace challenging changes begged for by current times. As in, who can marry whom. (Sound familiar, proponents of Minnesota’ Marriage Amendment?) So: a musical with both a heart and a message. We easily succumb to both.

The stage is set—just barely, and most effectively—simply with the bare birches of the Russian forest, upon which, almost as through a gauzy filter, the sepia tones of the villagers’ dress is interwoven,  like faded photos of a former time—appropriately subdued backdrops that allow the energy of the performance to carry the day. The voices of all are winsome and strong, pure and sincere, from Keith Rice as Teyve’s oh-so-Yiddish “If I Were a Rich Man” to his daughters’ dreamy “Matchmaker, Matchmaker” and the pensive ballad “Sunrise, Sunset” sung evocatively by him and his wife, Golde, performed with love, wit and understanding by Michelle Barber. Yet it’s the dancers who steal—okay, blatantly run away with—the show. And it’s Chan choreographer Tamara Kangas Erickson at her very best, which is saying a lot.

The large ensemble of familiar Chan faces—among them, Jared Oxborough as the ardent student, David Anthony Brinkley as the harrumphing butcher—is complemented by a share of newcomers, such as Serena Brooks, sweet as daughter Tzeitel. Director Michael Brindisi draws the magic from the script and music, saluting but not milking the moments of sorrow as well as celebrating the vitality, the very life, of people who must change to endure. The production continues through February.