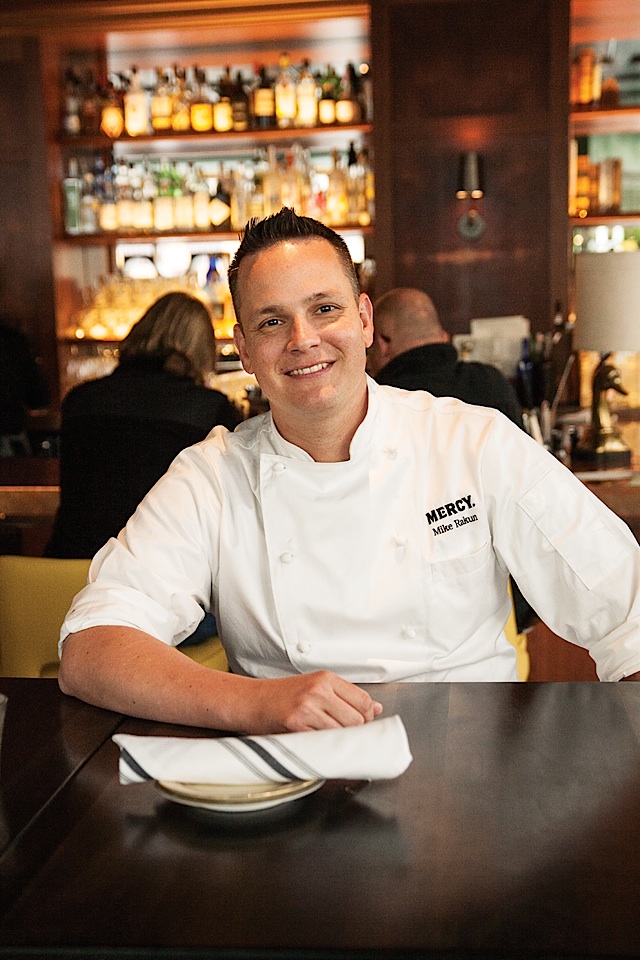 “Wait, did Marin close? That’s the restaurant downtown inside the Chambers Hotel, right? Isn’t something else there now? Oh, you’re going to Mercy for dinner tonight? Where is that again?”

It can be hard to keep up in our frenetic, ever-evolving dining landscape. Restaurants come and restaurants go. Some eateries evaporate into the ether unawares. Others transmogrify into something magical, and more elevated than their origins.

Such is the case with Mercy, formerly Marin. Same talented executive chef. Completely different expression of his heart and soul. Executive chef Mike Rakun and his business partner-wife Abby Rakun are telling a story with Mercy. A delicious, inviting story. 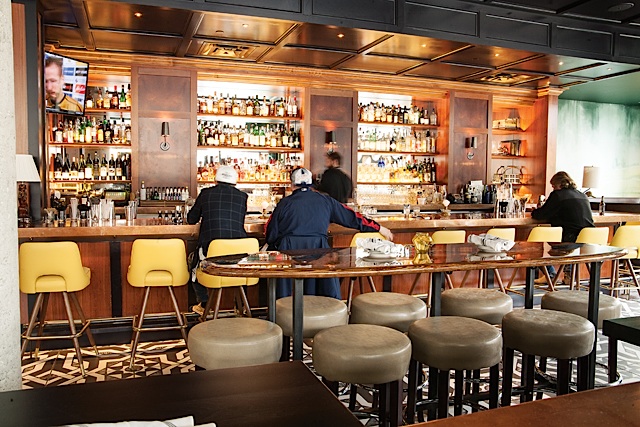 The bar at Mercy

Mercy peels back the layers of Marin’s once classic, upscale fine dining ambience to reveal a warmer, more relaxed, hygge-infused casualness perfect for an increasingly neighborhood-ish stretch of downtown.

One rainy afternoon a few weeks back, friends and I fell into a comfy large booth in the bar. Aiming to fortify ourselves against the dreary rain-soaked cityscape, we ordered drinks and began a tasting trip across the menu.

The offerings are at once familiar, yet full of playful takes on classic dishes. The pacu fish ribs, for example, an appetizer for the adventurous, takes a fish you’ve probably never tried and slathers it in a classic buffalo dressing. They are meaty and crisp, earthy and substantial. 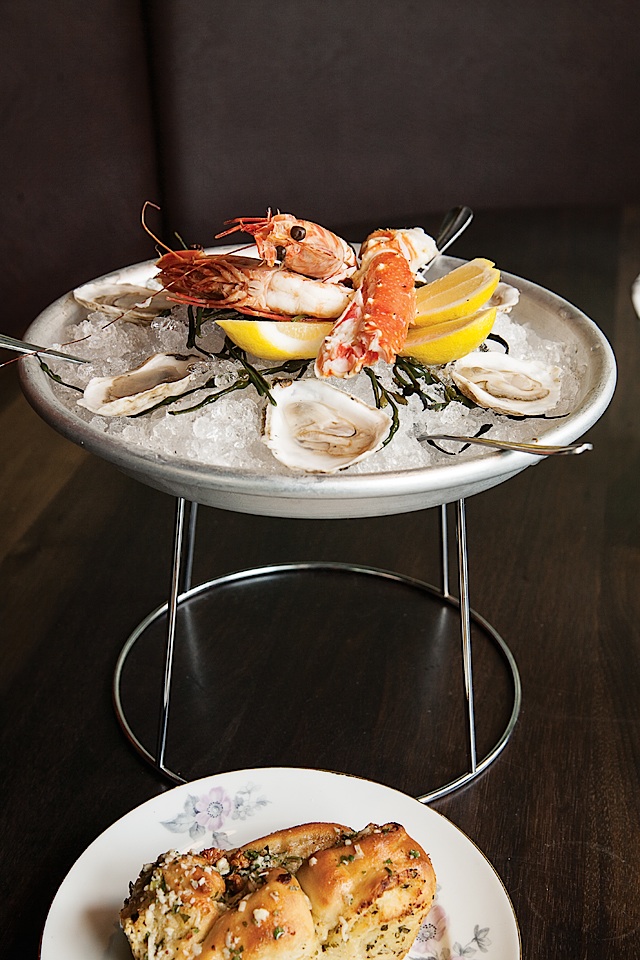 We traversed a tantalizing topography of tasty sea treats throughout our meal, from scallops to shrimp to oysters and lobster.

Let’s talk about the lobster. Roasted to perfection and nestled atop farm-fresh spring peas, the sweet, succulent meat stands alone in flavor. The fact that it’s drizzled with a dazzling chili oil only adds to its appeal. 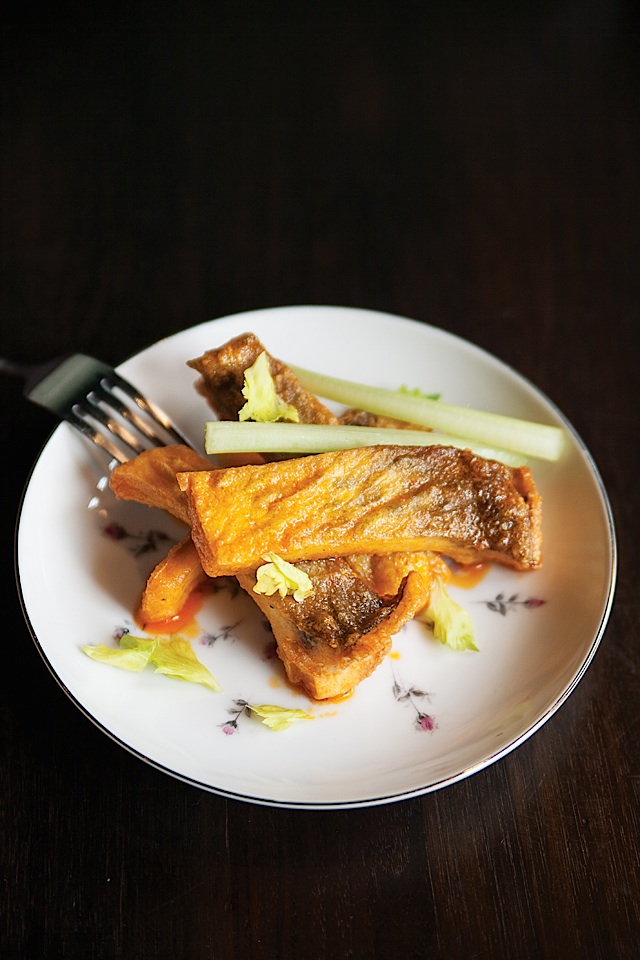 The scallops were another big hit. Buttery sweet and seared to perfection, the ample portions are laid atop fresh spinach, dressed in a warm bacon vinaigrette. The success of this dish lies in the surprise addition of croutons made from pillows of fried grits. Crispy croutons that magically melt in your mouth? Yep, you want these.

Sides at Mercy are comfy and satisfying. Take, for example, the garlic bread. No, literally. Take the garlic bread. Take all of the garlic bread and hoard it. Think homemade cinnamon rolls, but with garlic. And lots and lots of butter. It melts in your mouth and might lead to table fights if you don’t just go ahead and get two orders already.

Another entrée worthy of mention is the duck breast. Chiefly because I generally avoid ordering duck breast. It is oft over-cooked and woefully under-seasoned. Not only does chef Mike know how to sear the perfect piece of duck, he one-ups every other duck dish I’ve ever had with the addition of handmade duck-stuffed pot stickers. Trust me. A plate of these poultry pillows on a rainy day will cure appetites and broken hearts. 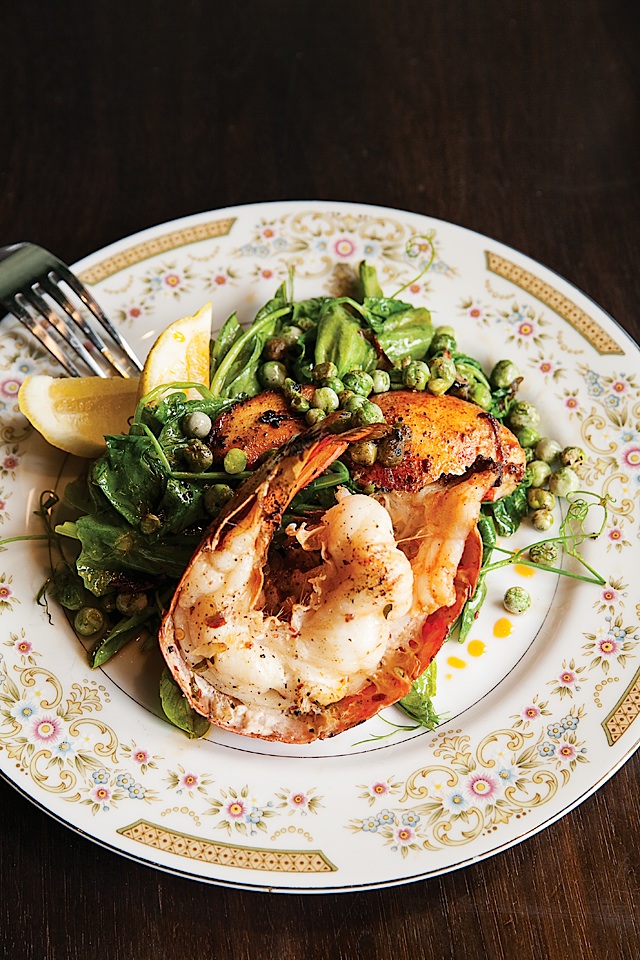 Roasted lobster on spring peas with shiitaki and chili oil

By the time desserts arrived, we began to wonder if our eyes had been bigger than our stomachs. Who am I kidding? We were full, but heck. When did full ever get in the way of dessert?

We opted for the triple chocolate sundae. Three scoops of ice cream, each a different member on the chocolate family tree, are drizzled with more chocolate, then dotted with bite-size chunks of chewy chocolate brownies.

The key lime pie is deconstructed, but every bit as rich and rewarding as its namesake and classic, sliced cousin. 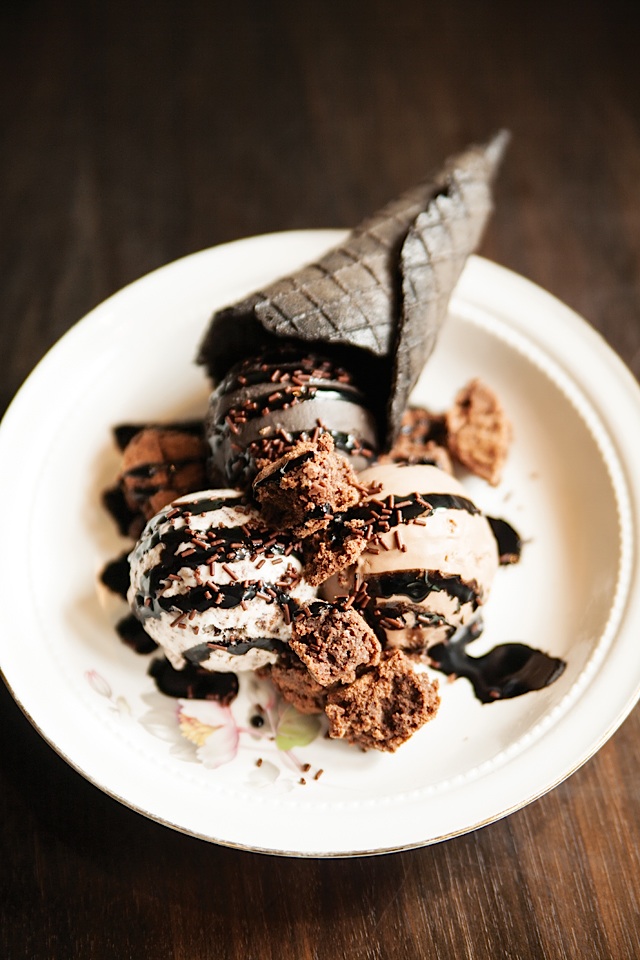 A couple mugs of decaf later and our appetites were not only sated, they longed to know when a second trip was in the cards. That’s no small feat. Maybe next should be the brunch.

Mercy is a welcome addition to downtown. Casual, but not just for casual’s sake. It’s a welcome respite from the frantic pace of a bustling metropolis just outside its doors. It’s a satisfying meal, familiar with a hint of adventure. Perfectly suited for a city with similar attributes.

And did I mention there’s a burger on the menu? 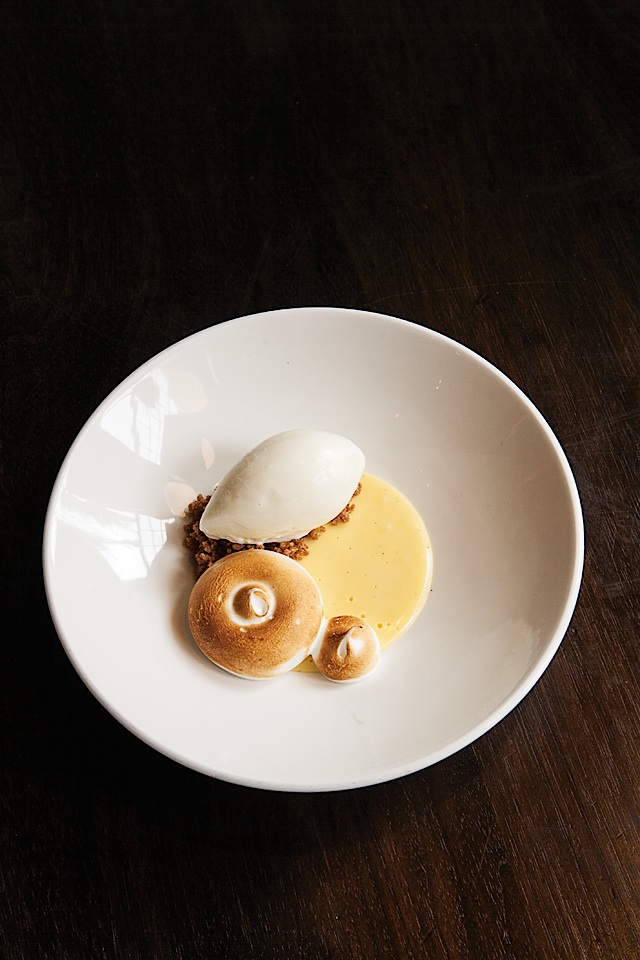 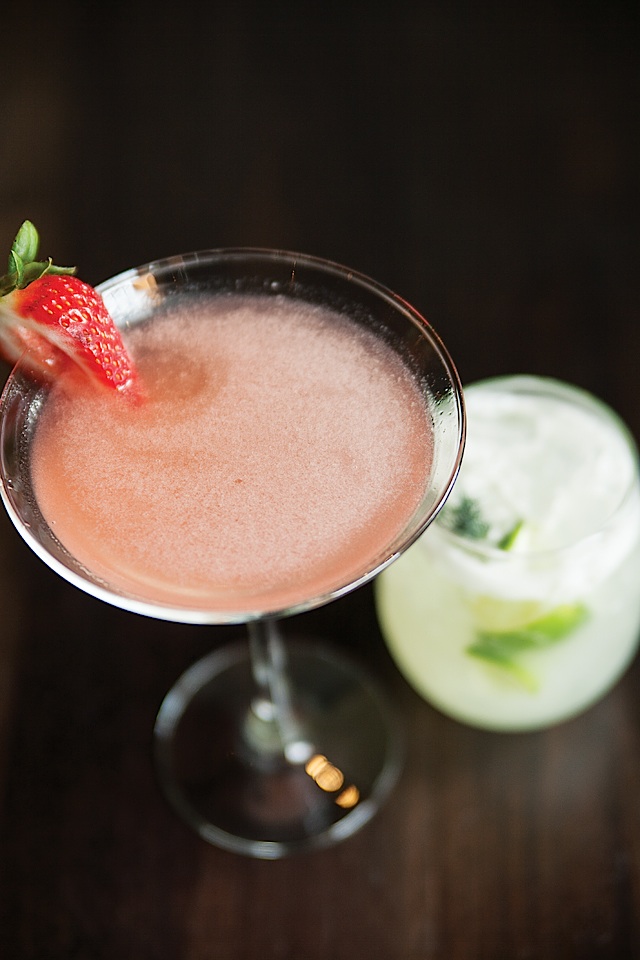 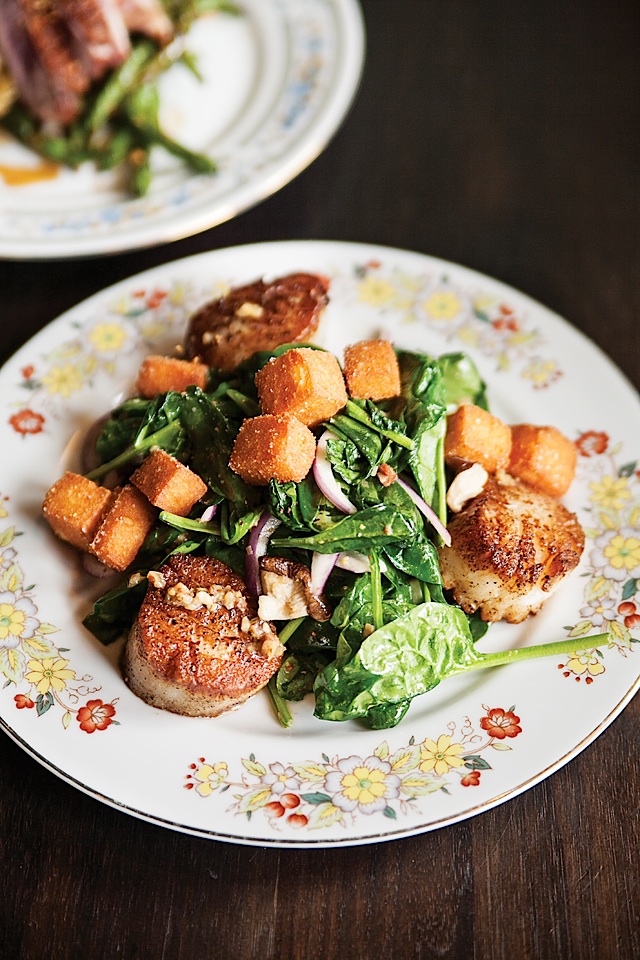 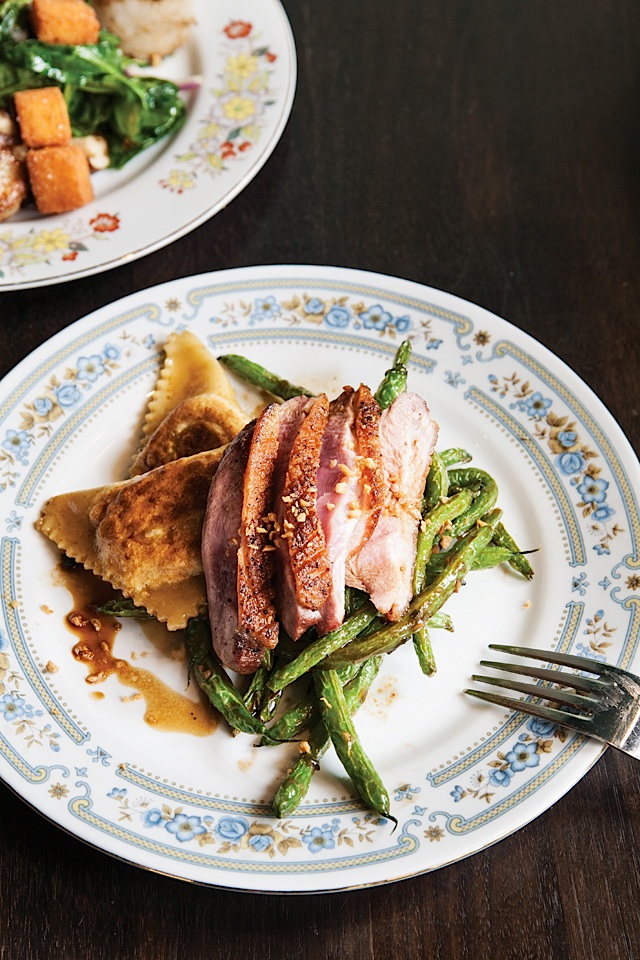