“Doubt” Is Yet Another Minnesota Opera Triumph! 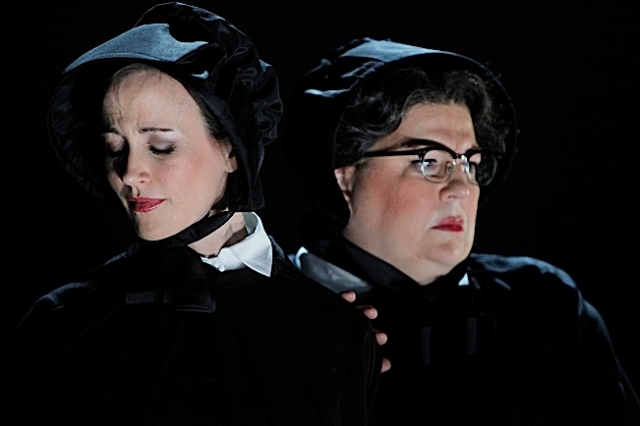 Minnesota Opera has blown us away in recent years with world premieres of what are on their way to becoming landmark operas: The Grapes of Wrath (2007) and last year’s Pulitzer Prize-winner for music, Silent Night. So one might not have dared to dream that they would strike gold a third time, but they have! The opera version of John Patrick Shanley’s Pulitzer Prize-winning and Tony-winning drama has been shaped into a gripping world premiere production that has deservedly won acclaim from some of the nation’s major critics since its opening this past weekend. 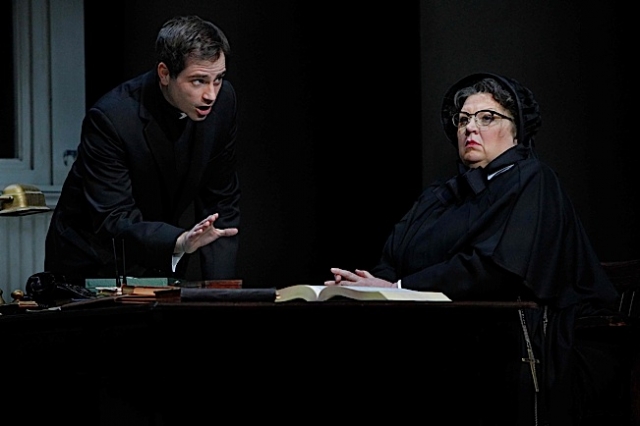 Matthew Worth and Christine Brewer. Photo by Michal Daniel.

Shanley’s titanic conflict between an older regimented nun, Sister Aloysius, and a charismatic young liberal priest, Father Flynn, is fueled by what she wants or needs to believe is his inappropriate relationship with a new African-American boy pupil at the parochial school they both oversee in different ways. She is the principal. He is the priest who coaches, guides the altar boys, and has ‘rap’ sessions with the boys on how boys should behave. Both Sister and Father are white. The genius of Shanley’s drama is that it’s really impossible to be absolutely certain whether Flynn molested the child or did not. (The 2008 film actually lost the balance but the opera, thankfully, has restored that balance.) 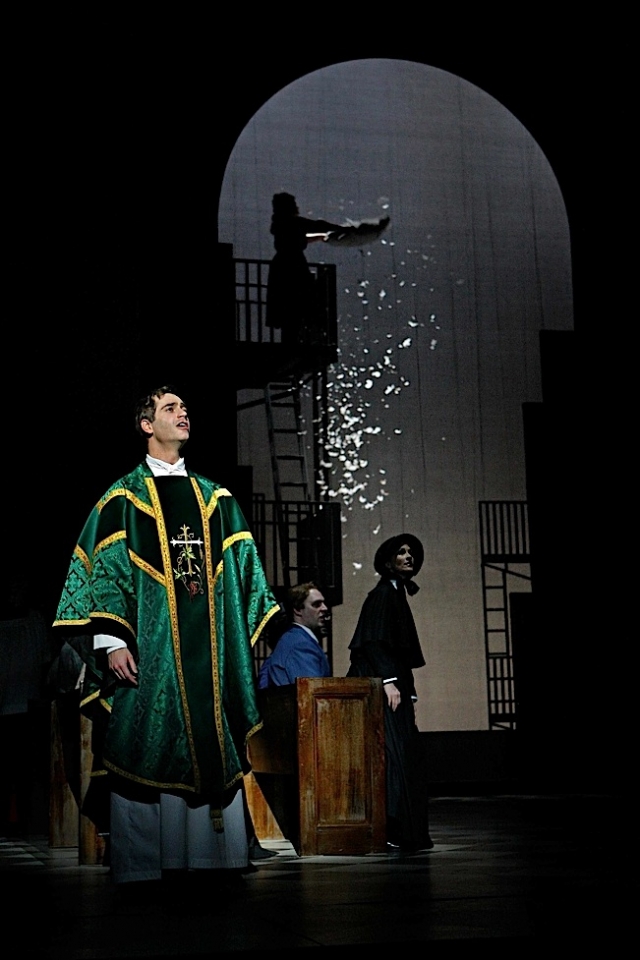 Matthew Worth. Photo by Michal Daniel.

Shanley has written the libretto with a magnificent score by Douglas J. Cuomo. The libretto has more conversational dialogue exchanges than most operas while still expounding some fabulous solos and a beguiling duet between Sister James, an idealistic young nun, and Flynn. Director Kevin Newbury’s view of the story’s Roman Catholic dimension paradoxically returns it to the 2005 play’s Roman paganism archetypes of Juno v. Apollo. (The film’s regrettable miscasting of Philip Seymour Hoffman chucked that. Though Hoffman is a great actor, he came off as a slouch.) Flynn must be bursting with appealing masculine vigor, vibrancy, and a delicate touch of reformative zeal. Baritone Matthew Worth manifests those qualities splendidly and his voice is divine.

A transcendent soprano, Christine Brewer as Aloysius exudes Juno-esque psychic thunderbolts as she tenaciously dogs Flynn and James about her unsubstantiated suspicions. The masterful Brewer is a powerhouse who blends into the action, in service of the character and the story. Her accusations will make you flinch but you get a clear sense that she is ferociously devoted to her children’s safety. Yes, her stern heavy-handedness is excessive but how can you not applaud her when she stresses to the students that in the 1930s -a Depression Aloysius lived through- was a time of dreadful privation. Moreover, she extols FDR, who even today, is considered by many, if not most Americans, to be the most liberal in American history. She also brings attention to the fact that the Catholic Church is a hierarchy that shuts out women, something that Hanley has structured tightly into his libretto. So you may start to think that it’s sour grapes or why doesn’t she leave it. But as the opera unfolds you see it’s not so simple. To point, the woman, for all her flaws, is fascinating and complex and Brewer lives maddeningly and beautifully into that. 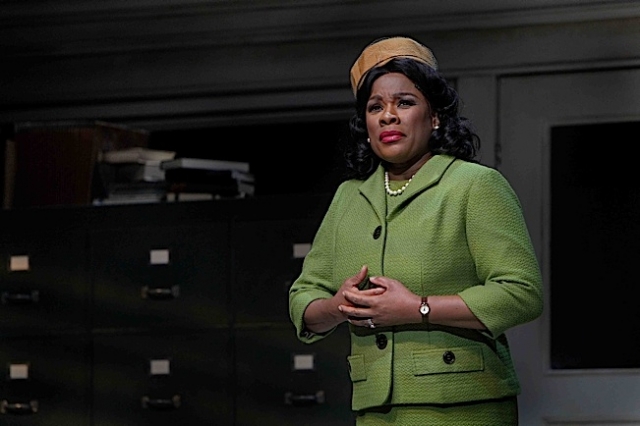 The major supporting vocalists, both mezzo-sopranos are equally marvelous. You may find yourself squirming as Mrs. Miller, the boy’s mother, navigates the brutal reality her son, Donald, navigates. She senses that her son is gay and like just about anyone in 1964 there is no rational conversation to be had about it, especially in a religious-based school. In a luminous portrayal, Denyce Graves as the mother, weighs whether it’s better for Donald to be molested by a priest who cares about him or beaten by a father disgusted at what he sees as his son’s girlishness. Call her awful for even considering this or brave for seeing the contrast. But remember, we really don’t know if anything happened between Flynn and Donald. And I have to mention this. Graves, a woman of color, is one of the world’s great opera performers. If only the White House had selected her to sing the National Anthem for the second Obama inaugural there would have been no question of the reality of her voice. It would also have drawn attention to the music world that lives beyond the realm of well-paid pop. 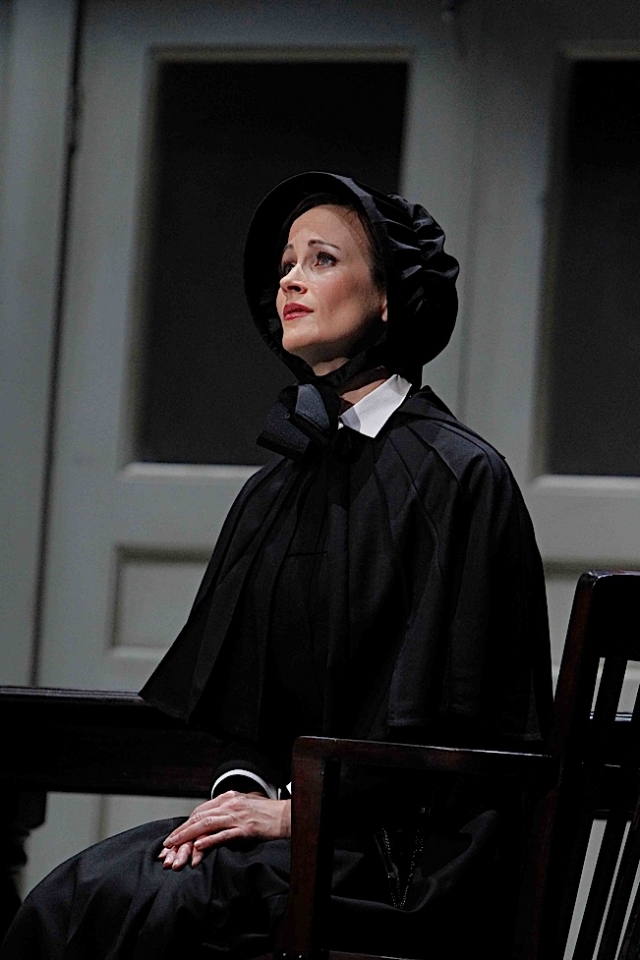 Adriana Zabala’s superb James is the very picture of someone who cannot decipher what to believe. So very human. She’s honest enough with herself to know that her ideals can blur an honest view of Flynn. But she also fathoms the depths of Aloysius’s bitter anger and the degree to which the older nun may have let that bitterness infuse her soul.

In reading this review you may be struck that world class opera singers in top vocal form also have mastered the craft of acting so richly. But Newbury has seen to that admirably. There is nuance and subtley here that even the best dramatic stage actors could envy. And it’s all sung! Conductor Christopher Franklin’s musicians also find a supreme subtlety with echoes of Benjamin Britten, John Adams, Philip Glass, and Leonard Bernstein. There’s a perfect balance between musical instruments and the voices. 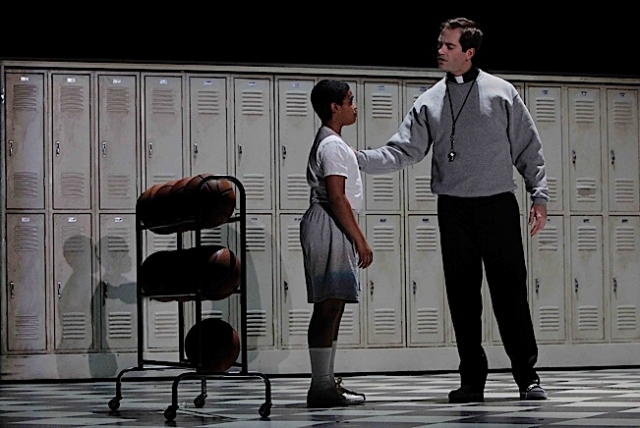 Matthew Worth. Photo by Michal Daniel.

Robert Brill’s majestic set with its imposing columns is nimbly re-arranged to represent a locker room, and office, a basketball court, a gorgeous chapel sanctuary, and a balcony used for the opera’s amazing ‘gossip’ scene. Whatever you decide about the characters bear in mind that in 1964 most people still equated homosexuality with pedophilia. It also brings home the problem that major institutions that systematically exclude women from positions of power, do so at their own peril, and in this case, even men and boys suffer for it.