Darling Boyz!—”Pray the Gay Away” is Vibrant Farce that Crackles and Sparkles! 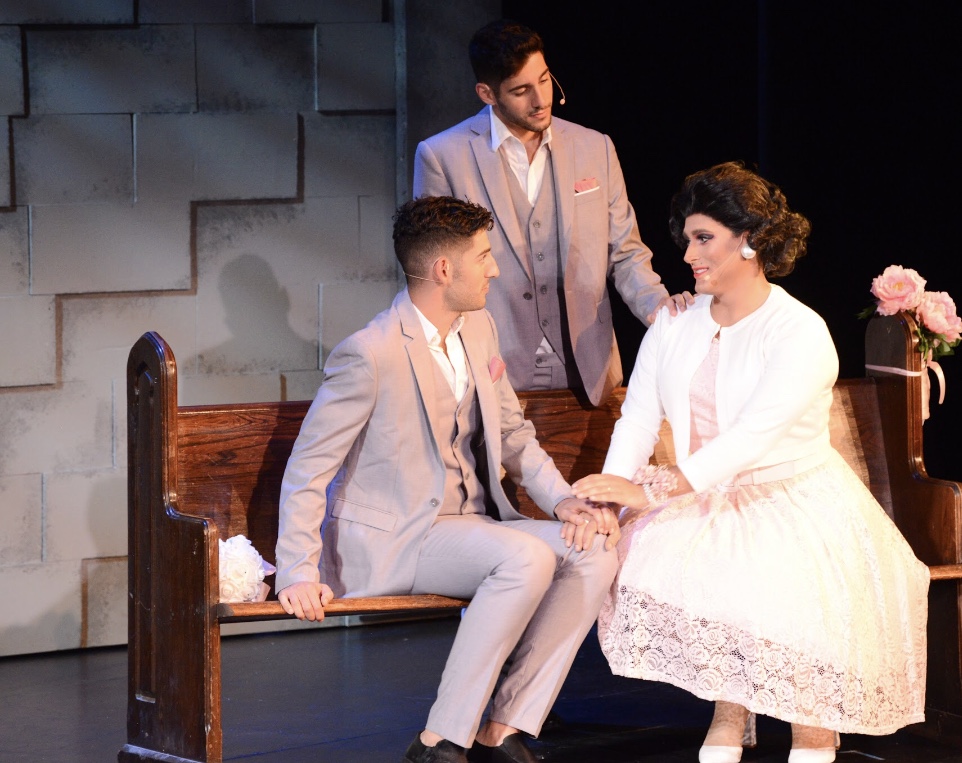 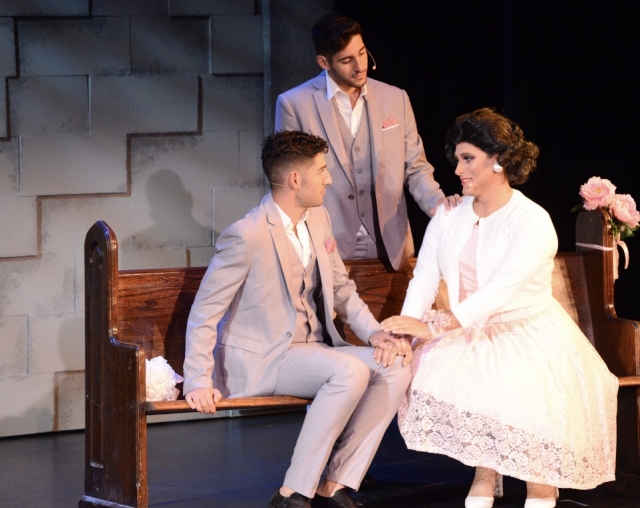 Pray The Gay Away. Photo by JUST TOBY

Endless love and endless mischief turn, twist and shout in what is surely one of the best farces of the 21st century so far. The inspired Pray the Gay Away takes one of most charged conflicts of our day and still finds common ground in its relentless overstatement of religious piety subverted by campy gay aplomb.

Pray the Gay Away is the stage version of the memoir by gay twin Iraqi-American brothers Zachary and Michael Zakar, whose devout Catholic mother has had a very hard time accepting their homosexuality. Both actual brothers play themselves in this brilliant stage adaptation by Bobby Brower. Its zany world tour now plays Minneapolis at the Cowles Center.
The uproarious production directed with dizzy genius by Eric Swanson heretically mines comedy gold. But audiences of both extremes may find themselves wincing from embarrassing self-recognition at points. It flames wildly and madly over the top with the homophobic paranoia of a mother played in drag by an utterly magnificent Vince Kelley and two criminally handsome gay twin brothers whose coming out process bedazzles with unbridled sexual expression. Moreover, the pair claims their Christian identity as well. There’s something rather revolutionary in this.
Right from the get-go, we learn that Pink is Beautiful as Zachary, a.k.a. Zach, stands guilelessly before us in skimpy pink undies and beautiful legs. (No surprise here as these dreamy twins have already had a successful modeling careers.)
Next we’re in the bedroom he shares with brother, Michael. Kneeling at prayer, we see that the pictures of Mother Mary hanging over each of their twin beds has a sultry photo of Britney Spears on the flip side. One of the earliest of the show’s many terrific sight gags is of Zach unfurling a long strip of condoms. An example of one of the show’s continuous flow of expertly timed moments.
Zach ever-so-deftly plays a mix of matter-of-fact and naive with sight gags and outlandish situations, such as sequences where he is awarded his Gay Card at the Gay Gayme Show hosted by a gloriously kinetic Corey Shorter, who also captivates later in the show in a clever scene with Mom.
Fear not. Michael shines equally as well. Much as we may be won over by Zach, he’s rather tyrannical toward his bro by lording over him that he’s not as popular. (Some might think Zach needs to be spanked!) But when a studly Jeffrey James Fox scores with both high school boys in a bathroom stall, both are brought down or up to the same level, depending on how you look at it. Of course, the sight gags involved in this are hysterical.
As high octane as the twins are, the stakes shoot up, as Kelley’s Mom who goes toe to toes with them in a crossgender performance for the ages. When she notices Michael’s pink socks and goes unhinged, all hell breaks loose. Whether she’s spraying holy water on one of them (“This is not who you are!”) or musing over why her sons’ best friends are girls, Kelley is a treasure trove of hilarious moments that will have you seeing stars.

But fasten your seatbelt when Mom unconsciously (or maybe semi-consciously) seduces the family priest, also played by Fox, and he quivers in turn, clearly open to seduction. (He’s actually totally conscious of his overcharged libido and is probably open to anything.) The irreverence will either have you running for the door or rolling in the aisles. The erotic tension between the two as they sit on opposite sides of the confessional booth will be shocking to some. It intensifies as the pansexual priest gets just as turned on by the Mom’s references to her hot young sons as he does by her, when she relates her concerns that, God forbid, they might be queer! Transgressive mutual lust, with a little hypocrisy to boot, infuses the atmosphere like gangbusters!

However, the tables are turned when the twins confront the audience for secretly desiring to watch them perform incestuous acts on one another. Zach also gets his comeuppance when after lording once again over Michael for having a boyfriend while Michael doesn’t, his piss-elegant fair-weather squeeze dumps him. Again, Fox astounds. This time in an eye-rolling turn as a narcissistic ding-queen for whom that overwrought term, “white privilege”, could actually be well-applied. What’s to be appreciated in this farce is that gay men themselves are not let off the hook for less than honorable behavior and choices. But of course, that’s where so much of the humor comes from.
Zachary James Morgan delights in various small sprite-like sexy roles. Swanson’s music and lyrics are terrifically attuned to the madcap cascades of hilarity. Justin Hawley’s set design, Michael Johns’s art direction, Karen Connor’s wardrobe, and Daniel Morency’s lighting all add resplendently to the vibrancy by infusing Pray the Gay Away with pizzazz, glamour, and kitsch supreme. This is flamboyantly fabulous farce, both in dialogue and in production, is a rollicking roller-coaster. It will likely continue to dazzle years and years from now.
Pray the Gay Away
Through Sept. 29
Cowles Center for the Performing Arts, 528 Hennepin Ave., Minneapolis
www.thecowlescenter.org