ASAPtown: Why a Trip to the Tip of Cape Cod is a Must 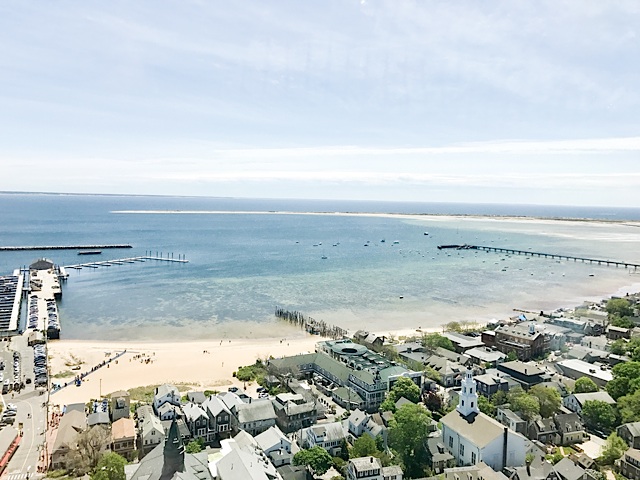 Provincetown, Massachusetts holds a pivotal part in America’s history. It was there that pilgrims made their first landing (yep, not Plymouth) back in 1620. In the 20th century, it served as a getaway for the LGBT community. Its role was to be a town where individuals could be themselves without judgement.

Today, Provincetown — commonly called Ptown — is a melting pot of all sexual orientations and cultures. And it’s hard to find another place like it. Here are my top ten tips for planning a perfect trip to the tip of Cape Cod.

Go between Labor Day and Halloween.

Provincetown can be expensive. During peak season months of June through August, rooms can cost up to $750 a night. Plus, many hotels require a two- or three-night stay.

To save cash, business owners recommend visiting between mid-September and Halloween. The cost of a hotel room drops considerably, and it’ll be easier for you to get a table for dinner. And bonus: it’s still warm.

Another option: New Year’s Eve. Efforts by Ptown community leaders to create buzz during the winter can’t be ignored, with special events and a handful of restaurants and bed and breakfasts open year-round. Ptown’s average high in December is 40-45 degrees, resulting in a warm(er) weather destination for Minnesotans. You’ll want to plan a New Year’s trip well in advance, as many places do close off-season.

If you’re looking for a summer getaway, check out the list of Ptown’s various themed weeks, ranging from a women of color festival in June to bear week in July. Many Provincetown residents told me the best week is their Pride celebration, Carnival. The mid-August event attracts nearly 90,000 visitors, which is quite impressive considering only 3,000 people live in Ptown year-round. 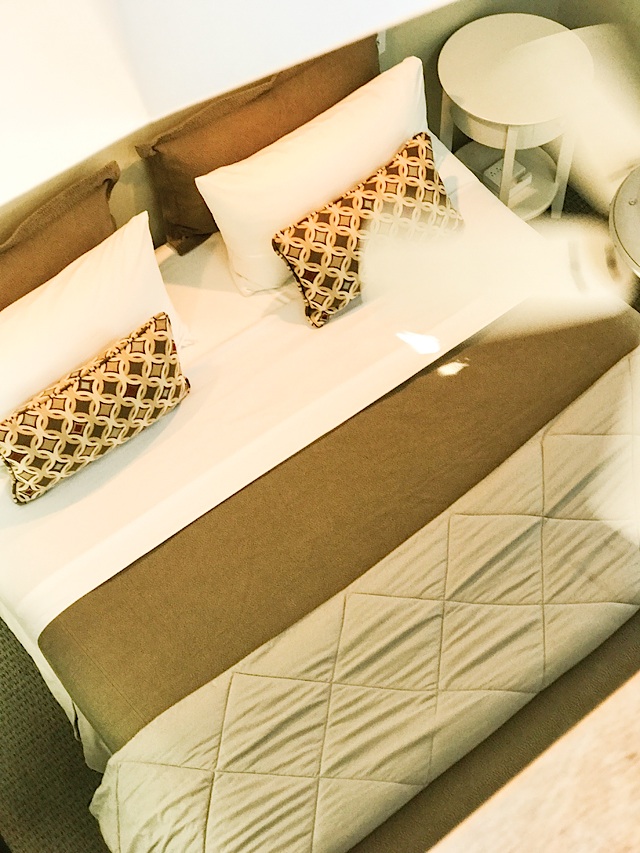 Your priority should be finding a place to sleep.

Bed and breakfast spots are common. I stayed at the Secret Garden Inn, located in the epicenter of Provincetown. It was my first B&B experience, and it was refreshing to have a quiet spot to recharge. The owners, Chip and his partner, David, start you off with breakfast (score!) and plenty of restaurant recommendations. And I quickly became acquainted with the other houseguests who were happy to give suggestions.

Boutique hotels are scattered about, most with fewer than 40 rooms. 8 Dyer, located in Ptown’s East End, boasts a modern flair. See if you can get the corner room on the second level; it has a jacuzzi in the loft.

The Brass Key was the swankiest of hotels I visited. It has a Palm Springs vibe, where outdoor courtyards are common. It would be easy to spend a whole day on the property.

If you’re traveling with a group, consider renting a condo or house. Airbnb and VRBO have options.

Noteworthy: there’s no way for you to use your HiltonHonors points to get a room in Provincetown. Chain stores, or “formula businesses” as they’re legally referred to, are banned. And it’s not just hotels: you won’t find chain restaurants or big-box retailers, either. The Ben & Jerry’s on Commercial Street was grandfathered in to the law.

The bars close at 1 a.m., but the party doesn’t end then.

All bars in Ptown close at 1 a.m. but for those wanting to party past then, no worries.

After bar close, you’ll find an overflow of people looking for a late-night slice at Spiritus Pizza, located near many of the gay bars. The slices are big and only a couple dollars. When the weather cooperates, the party moves out onto their front steps where people watching is prime.

And when I asked Ptown residents about the nightlife, multiple guys told me you’ll find an after party somewhere. They’re not publicized, so ask around. 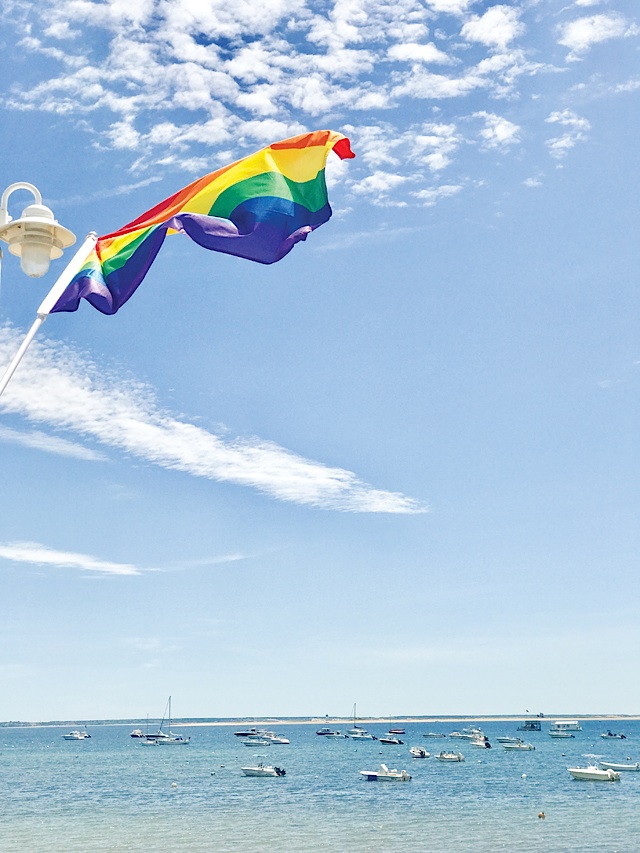 Experience Ptown from (or near) the water.

The main drag in Ptown, Commercial Street, has plenty to offer, but don’t forget to head out and enjoy the beauty of Cape Cod.

A dune tour was a highlight of my trip. Art’s Dune Tours, an LGBT-owned company, has guided excursions out to the Cape Cod National Seashore for over 70 years. You’ll be part of a small group (up to eight) in an SUV with a tour guide who will point out the untouched beauty of the land, which was dedicated by President John F. Kennedy in 1961. The sunset tour is well worth the $49 fee. Your tour guide will pack you a camping chair and Mother Nature provides the entertainment. Make sure your phone is charged to capture the stunning views of sunset on the shores of the Atlantic Ocean.

When the water heats up, you’ll find kayak and paddleboard rentals along the shore. Explore on your own, take a guided tour, or join a class.

Another way to get out on the water: a whale watching tour. It was my first time going on one, and it was the most tourist-like activity I went on during this trip. The guide on the Dolphin Fleet was knowledgeable, but the path whales take is unpredictable, meaning it’s a risk as to whether you’ll see many whales and snap a photo of a humpback to make your Facebook friends envious. The $47 ticket price is steep for what I saw and the overall entertainment value.

Virtually the last thing you need in Ptown is a car, because it’s incredibly easy to navigate the city by foot. Commercial Street is jam-packed with food, shopping, and bars for about a mile. Parking along Commercial is scarce and it’s a one-way, narrow street with lots of pedestrians.

Wooded bike trails connect the city to the National Seashore, so if you’re looking to head up there, a handful of businesses will rent you a bike for the day (check out Arnold’s Bikes located near the pier).

From Boston, it’s about a two-and-a-half hour drive to Ptown via US 6 (it runs from the end of Cape Cod all the way to the California coast). But driving is not recommended, noting traffic can be brutal, especially in the summer. The best bet: the Fast Ferry. Bay State Cruise Company offers 90-minute trips from Boston to Ptown multiple times a day during their season, which runs mid-May through mid-October. The $88 round-trip price is well worth avoiding the hassle of driving, and there’s a bar on-board.

Another way to travel to Provincetown: Cape Air. You’ll be able to board their small aircraft in Boston for the 20-minute flight. But be advised, a one-way ticket is commonly more expensive than a round-trip Fast Ferry. 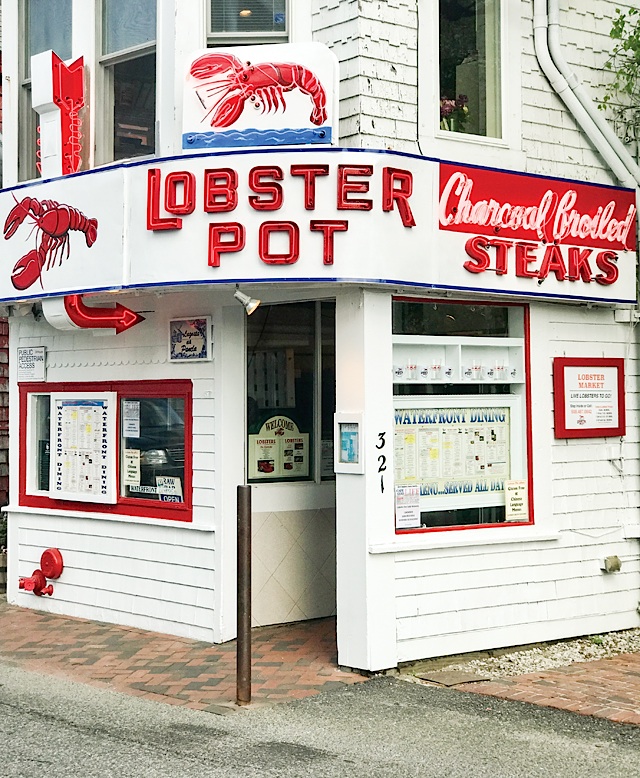 Eat as much as you can.

The most common question when I got back from Provincetown was, “What did you eat?” From seafood to burgers, the locally owned, independent restaurants in Ptown offer a wide variety of food.

The Lobster Pot is the most kitschy restaurant I dined at, but the food gets high remarks. Ask to sit on “the top of the pot” to get a panoramic view of the shore. Try the seafood fettuccine or the Portuguese fish (Portugal has an influence in Provincetown going back centuries).

Strangers & Saints, located on the East End of Commercial Street, is where you’ll find Ptown’s locals after ending a work shift. Their craft cocktail list is impressive, many named after historic events in the city’s past. They serve food late-night, too, which isn’t common. The roasted eggplant with tahini sauce was a highlight.

On the West End, Cafe Heaven serves up a tasty lobster hash with poached eggs for breakfast.

Throughout the trip, I asked people where to eat, and kept getting the same answer: The Canteen. Owned by a former newspaper journalist, Rob, and his partner, Loic, the restaurant has a walk-up counter serving up lobster rolls receiving high praise. I had a fried oyster roll served on perfectly toasted thick-cut bread. Delicious. Hidden gem: take your food and eat behind the restaurant where you’ll find a communal table (you got to know it’s there because it’s hard to spot from the street). Loic is expanding that area (on the seashore, by the way) to include a fire pit and additional seating. In the winter, they turn it into a Christmas village.

And there are plenty of snacks up and down Commercial Street. Check out the Penny Patch; they’ve  made fudge on-site for decades.

Pack for any situation. Seriously.

You’ll want to strategically plan for what you’ll wear. Definitely bring shoes you’re comfortable walking in. During the whale watching tour, I wished I had packed gloves, because I quickly found out it gets really cold when you’re cruising the Atlantic at 23 miles per hour. For the sunset dune tour, I was glad I grabbed a sweatshirt and would have enjoyed a fourth layer.

I hate paying additional ATM fees. My bank already charges me, so when an independent ATM wants me to pay another $3, I get bitter. From what I noticed, Bank of America is the only national bank with an ATM along Commercial Street. My advice: bring cash, and take out more than you think you’ll need. Ptown is becoming increasingly expensive, and since it operates as a seasonal destination, you’ll find places operating cash-only.

Provincetown is a thriving culture for the gay community.

The Crown & Anchor boasts a hotel, restaurant, cabaret, and various bars. It’s home to Miss Richfield 1981 during the summer and draws plenty of big acts including Leslie Jordan and Margaret Cho.

The Boatslip Beach Club is home to Tea Dance, a daily outdoor dance party right on the oceanfront. It’s definitely worth paying cover to get in.

The Atlantic House (or A-House) claims to be one of the oldest gay bars in America. Late night, their Little Bar opens up to become a full dance floor. Upstairs is the Macho Bar, a leather-friendly spot. Heads up: the A-House is cash only.

The Gifford House, known as The Porch Bar, is an oasis for locals and is home to a piano bar.

Remember those who live in Provincetown are the ones serving your dinner and also the same people dancing next to you at A-House. Be friendly and introduce yourself. I received my best recommendations from them.

Commercial Street is perfect for people watching. If you’re looking to mingle, take your eyes off your phone and make eye contact with passersby. Chances are you’ll see them again, and you never know how the night will end.

Find more on Mike’s Ptown trip on the Lavender website. He is sharing more photos and advice on Twitter. Follow @mike_marcotte. Thanks to the City of Provincetown and the Provincetown Business Guild for their assistance. The Business Guild has an elaborate guide on navigating Ptown. Connect with them at www.ptown.org.