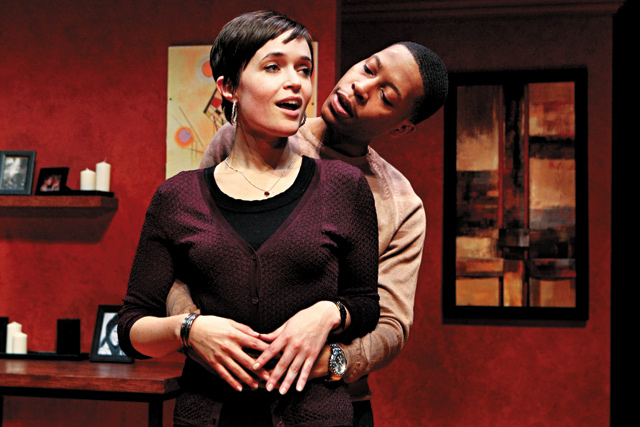 Tracey Scott Wilson’s daring drama turns racial stereotypes on their heads. The Pillsbury House production was selected as part of the Guthrie’s inclusion of exceptional work by smaller local theaters. A black attorney and his white significant other set up housekeeping in his old rough neighborhood, which compels her to deal with reverse-racism and sexism. The plot thickens with a white buddy who invades their life with his mediocrity. Namir Smallwood, Sara Richardson, and Hugh Kennedy reprise their roles directed by Marion McClinton, and the buzz has it that there are some interesting new developments in the new production.

Not since the 1990s has the region’s premiere comedy theater created a fully feminist revue. Long overdue, I’m thrilled to report that Babe Lincoln is terrific. Brave New Workshop veterans, Lauren Anderson and Katy McEwen, as directed by McEwen’s husband, Caleb, deliver the laughs while making us consider how women fit and don’t fit into current day American society. The tone is light but you end up walking out with rich food for thought.

There’s a delicious spoof of Adele singing on a Sesame Street episode and depressing the muppets. GI Joe “cannot commit” because his first love is America. GOP candidates who make light of rape are rightly ridiculed. Hillary Clinton is celebrated for her pant suits. And the Vajazzled term in the title has to do with a clothing line specifically made for the female anatomy and I’ll let you wonder about that until you actually see the show.

There are two sections that especially impact:

1. The actresses conduct what they call a “social experiment” where the try to make men cry with visuals from father/son movies, sports movies, and endearing animals. It’s hilarious and fascinating. Different audiences will respond differently.

2. A remembrance of suffagists, Lucy Barnes and Alice Paul, who truly suffered to get women the vote. Anderson and McEwen then take contemporary American women to task who squander that right and the citizenship it confers.

Peter Guertin’s music direction and Erin Sheppard’s choreography add bounce and funk to this vibrant production. Not to be missed. 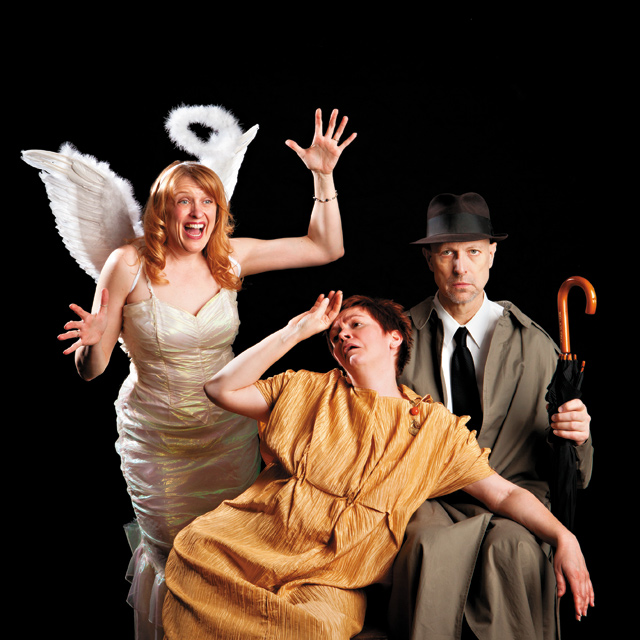 Great Britain’s Caryl Churchill is regarded by many as the greatest living female playwright, so it’s a treat when even one of her short plays is produced. When you attend the evening of Theatre Unbound’s short plays by women showcase, you’ll see Churchill’s The Judge’s Wife. Director Maggie Scanlan says, “[It] concerns the heavy sentencing of a political would-be terrorist–possibly the IRA, we never know–by an extreme right-wing judge. The judge’s wife has a speech to her sister about how the judge was actually a martyr to liberal change; that he was acting like an extreme conservative, undercover as it were, in order to draw people’s attention to the absurdity and danger of the positions espoused by the conservatives.” Scanlan compares the play’s style to that of Harold Pinter and renegade gay writer Jean Genet.

Stephen Houtz, who plays the judge, is a long-time Churchill lover and finds his role to be “a truly complicated character who we don’t understand until the play is over, and that is a nice challenge in such a short play.” Other stellar female playwrights represented are Wendy “Pulitzer Prize-winner” Wasserstein, iconic lesbian feminist Carolyn Gage, and local luminaries Anne Bertram and Heather C. Brady. Dixie Treichel does sound design.

When playwright Tony Kushner was being celebrated at and writing The Intelligent Homoesexual’s Guide… for the Guthrie Theater three and a half years ago, he was also writing the Lincoln screenplay. Though the play in Minneapolis may have suffered for it, the Steven Spielberg film is nothing less than a masterpiece and Kushner deserves much of the credit.

There are some who dispute certain aspects of the script and the film, but there has never been a historical or biographical film that has not been disputed. I’m old enough to recall when director Franklin J. Schaffner’s Patton (1970 Best Picture Oscar-winner) was hotly debated in media and in diners, as was his even superior biopic the following year, Nicholas and Alexandra (Best Picture Oscar-nominee robbed by The French Connection). But both, as Lincoln I’m sure shall, have survived the test of time beautifully.

Kushner’s Lincoln is a triumph of language. There is scrupulous integrity to vocal cadences, grammar specific to the 1860s, and regional rhythms. All these are matched with his intensely detailed attention to the byzantine political maneuvering and emotional cyclones surrounding efforts to pass the 13th Amendment that would end slavery. Language is matched to age, race, and experience in the opening scene in which two young white Union soldiers and two black Union soldiers express themselves in distinctly different ways to the President.

Tommy Lee Jones as Pennsylvania Senator Thaddeus Stevens fascinates with dialogue that reflects his extraordinary position in American politics, not to mention his purism. You can feel the abolitionist’s driving force and his withering, nimble use of verbal attack on any who would cross his path. Stevens led the Radical Republican faction of Lincoln’s own Republican Party.

Jones’s final scene in the film brings a twinkle to the eye.

It’s also fabulous to see Hal Holbrook as Preston Blair. Oh, to age with the wisdom that Holbrook has! He has also given a profound performance in another recent film, Gus Van Sant’s Promised Land, a compelling cautionary tale about fracking. Holbrook is the male counterpart to Vanessa Redgrave.

Do I really need to say how magnificent Daniel Day Lewis is as Lincoln? It may go down in history as the most praised performance ever. Indeed, it’s off the charts. Though I still feel Lewis is just as great in There Will Be Blood and I still hold that had John Hawkes been nominated for The Sessions, Lewis would have had real Oscar competition. But alas, Hawkes, as the Strib’s Colin Covert has rightly pointed out, was robbed. Ironically, the superb Hawkes plays Colonel Robert Latham in Lincoln.

Kushner is loved for his consistently well-crafted representations of women. Sally Field’s Mary Todd Lincoln is not some cut-out doll of a madwoman stereotype. With succint language and piercing emotions, Fields conveys that there is reason–and perhaps some justification–for her resentment and obsessions. Of course, leaders and their spouses always have and likely always will have to sacrifice the private hopes that those of us who do not have such power need not renounce. At her side throughout is her confidante and attendant, Elizabeth Keckley, played seamlessly by Gloria Reuben.

Blair’s daughter, Elizabeth, is played with lovely affection by Julie White. Elizabeth Marvel’s Mrs. Jolly, a petitioner, is priceless. Of course, terrific small performances crackle throughout the Spielberg canon, but not as fully, richly, and specifically as in Lincoln. His films are known, even defined and/or dismissed by some, by their broad strokes. Some say he lacks subtlety.

Indeed, E.T., The Color Purple, Schindler’s List, and the under-rated Empire of the Sun, are sweeping epics that almost overwhelm with their scope at times. That’s one of the reasons we love them. But with Lincoln, Spielberg, with Kushner’s script as his anchor, is compelled to deal with nuance and simultaneously give us the sense of historical sweep he’s loved for. We saw the Spielberg/Kushner test run with the riveting Munich in 2005, which was rightly nominated for the Best Picture Oscar. With Lincoln, they’ve honed their skills, and have ended up with a masterful epic for the ages. 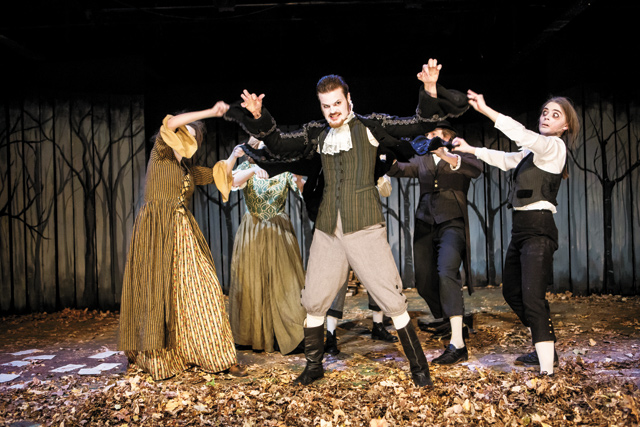 The Legent of Sleepy Hollow. Photo by Dan Norman

John Heimbuch’s new play, based on Washington Irving’s story, has been shaped with input from director Jon Ferguson and three actors with an eye to the culture of fear that we have been living under for over a decade now. Hence, it employs the tone and style of spectral silent film classics like Nosferatu and The Cabinet of Dr. Caligari.  Heimbuch says Ferguson has “imagined Sleepy Hollow as a place where inhabitants are frightened so often that terror has simply become their normal state.”

Heimbuch amplifies, “We pay particular attention to the role of fear and ambition in the love triangle between Ichabod Crane, Katrina van Tassel, and Brom Bones. The central question for these characters is ‘How do I win the person I love?’ And their most common approach is to manipulate each other, generally through fear and enticement.” Ryan Lear, Joanna Harmon (who wowed us in TRP’s Summer and Smoke recently), and Brant Miller play that love triangle.