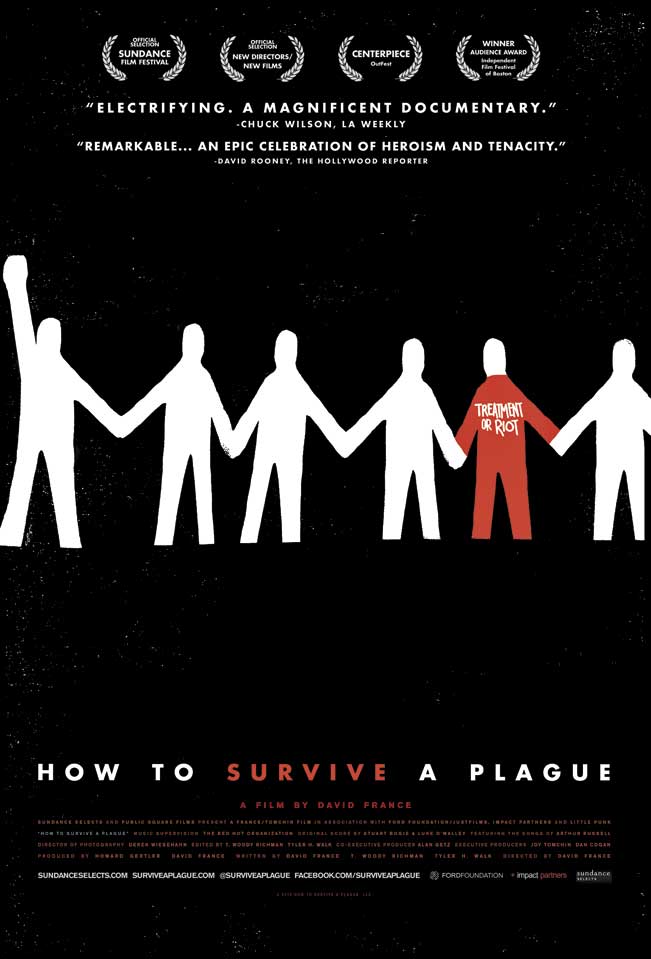 How To Survive A Plague

David France’s documentary captures the zeitgeist of the early years of the AIDS epidemic unlike any film you’ve ever seen. (And it is referred to in the film as an epidemic, not a pandemic.) Starting from the 1987 inception of ACT-UP (AIDS Coalition to Unleash Power), France chronicles events of that time with details that sear into the institutionalized homophobia around the disease and the panicked hysteria within New York’s gay men’s community. There were incentives in the nation’s most liberal city’s hospitals to not treat AIDS patients. There were even security policies that had sufferers thrown out of emergency rooms. Corpses of some who died were put in hospital trash bags!

Various activists are interviewed, and raw footage of their organizing and expression caught on film gives us a front row seat to how they brazenly and beautifully shifted the course of sexual discrimination, public health policy, and medical history.  Controversial disruptions caught on film at St. Patrick’s Cathedral, the global AIDS conference, and the Food And Drug Administration (FDA) are rivetingly recounted. Internal tensions between activists who ultimately made inroads into the medical power structure to the chagrin of AIDS patients and their advocates who felt left behind are frankly put forward as well.

For those who think that ACT-UP was unfair to the Reagan/Bush years, France will not give you any ammo, I’m afraid. The film is worth seeing just for its stark sense of how Republican attitudes toward funding and bureaucracy blended with homophobia actually endangered public health. And for those who think that the Democrats have always been warm and fuzzy about gays and AIDS—just wait till you see Mayor Ed Koch in confrontation with activists like Bob Rafsky and CNN’s token liberal Tom Braden’s obnoxious attitude toward Peter Staley.

If I were global dictator, I would insist that everyone have to watch it along with another gay doc masterpiece, 2010’s Stonewall Uprising, in order to understand just what the modern GLBT movement of today comes out of (no pun intended).

This fundraiser for Minnesotans United For All Families benefits from curator Mike Welton, a veteran of arts activism. His splendid visual sense was felt in his work for GAZE magazine in the 1990s, and let’s not forget his bold performance art and other stage work that railed against homphobic censorship in that same decade. Two decades later he’s swingin’ out again with a visual art show you cannot miss. It includes his own work along with that by Chris Nystrom, Pamela Weisdorf, and Leslie Pilgrim.

Welton shares, “I felt a strong desire to help with the fight to defeat the Marriage Amendment. The whole idea of voting on a minority’s human rights and culture just seemed too much to not do anything. Having been in the Twin Cities artist community for over 13 years, I thought the least I could do to help the fight against this insane amendment proposal would be to do it through my art as well as art from those of the community. Most artists, I think, do not limit their world view or their view of themselves…[they are] allowing themselves to think of marriage as an ever changing and all encompassing institution. This strange and ugly amendment is actually bringing our artistic communities together for a common cause.”

It was the first Disney animated hit to be turned into a Broadway stage musical and a gigantic smash hit in its own right.  It was also controversial at the time for various reasons. Some thought it a rip-off of a film success. Others a shameless ploy to get butts in Broadway seats and make Manhattan’s seedy 42nd Street area more family-friendly. Nonetheless, Beauty and the Beast holds its own as one of the most inventive Broadway musicals of the ’90s, and I submit that it is also a movingly powerful comment on the notion that powerful desire ultimately is triggered by something deep within rather than only the surface. Word has it that the current national tour is terrific, so go see it if you’ve never seen it. 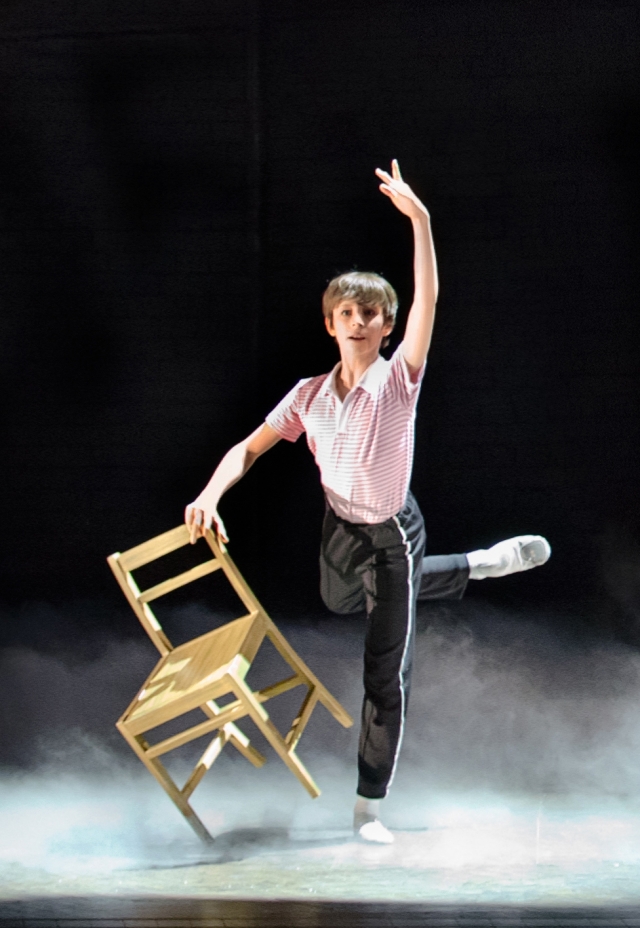 Christopher Howard plays the older version of the title character in the national tour of the Elton John musical smash. Howard shares, “I find the whole show is about power struggles. The time period is based around the mining strike in England in the early to mid 1980s. The whole community at large is in a struggle. The Coal Miners’ union is fighting against the government. And I think, too, it’s Billy’s struggles. He’s growing up, and he stumbles upon this ballet class and finds he has a knack for it. He really enjoys it and says, ‘I think I wanna do this.’ And so he has a struggle between him and his community, specifically his father and his brother. They’re afraid of something different. They expect Billy to grow up and be a miner, live in the town the rest of his life, get married, have kids. Do the normal thing that everybody in this town would do. And he wants to change that. He wants to grow up and be a ballet dancer. He has to step up to that family and say,’It’s just what I want to do.'” 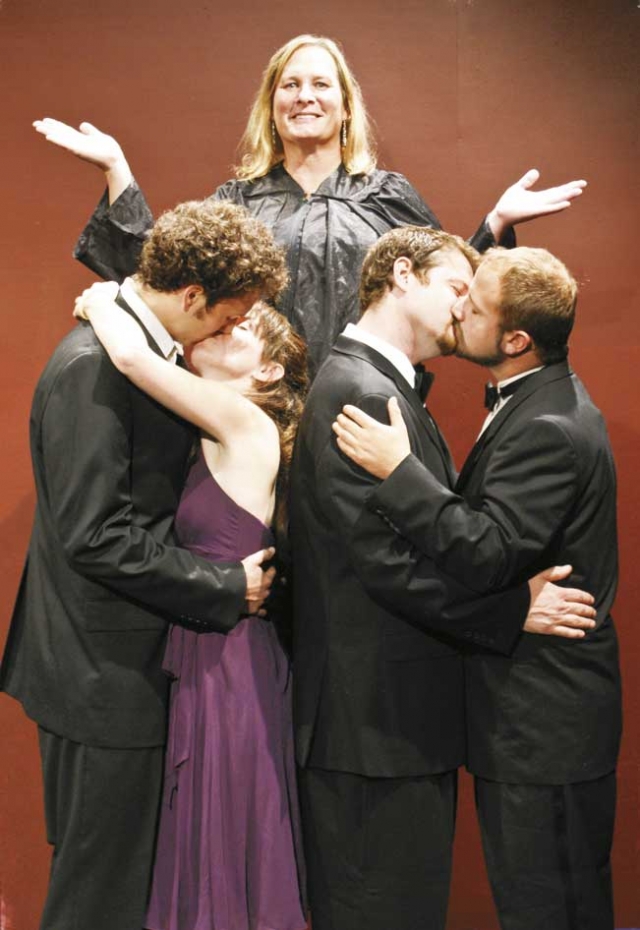 But Not For Love. Photo by Mark Lasuro

But Not For Love
Oct. 12-28
The Warren – An Artist Habitat, 4400 Osseo Rd, Osseo
www.workhousetheatre.org

Imagine a double wedding officiated by a woman, consisting of two couples—one gay, one straight. Add to that a policeman tasked to keep a volatile right wing protestor from disrupting the ceremony. Originally commissioned and produced by Pennsylvania’s Allegheny College in ’06 and revived last year in Los Angeles, Minnesota playwright Matthew Everett is happy to see it staged in the Twin Cities. He says, “politics, religion, and family all collide in a story like this. Given the current political climate in Minnesota, we thought it was vital to not only help put a human face on the issue of same-sex marriage, but also inject some much needed laughter and the possibility of a happy ending. This is the right time for this play to find its way to a Minnesota stage.”

Director Richard Jackson adds, “Matthew’s script manages to present a point of view without straying into polemics or propaganda. It’s not preachy, though he presents his arguments. It’s intensely human and universally recognizable. Weddings have so much inherent potential for drama that the specifics of this piece don’t feel manufactured.” 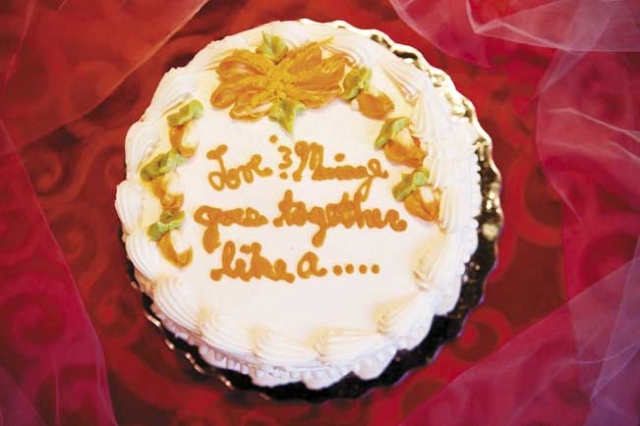 This past spring, composer/arranger Roberta Carlson and director Michael Robins had a moment of mutual intuition about creating a music theater piece about marriage equality. They left phone messages almost simultaneously saying “let’s talk” about the possibility. Robins recalls, “We met, and, lo and behold, we had the same idea: using music and people’s stories to counter the mean and often hateful voices that are behind the so-called marriage amendment that’s really about denying people, GLBT people, the right to legally tie the knot. We both thought an eclectic mix of songs. We both thought a big cast. We both thought nontraditional narrative. We were excited, and we are excited now.”

Robins concludes “we chose this form because we wanted to celebrate love and because we can’t legislate love and who you should or shouldn’t love.” Expect to hear familiar tunes ranging from Rodgers and Hammerstein to Jason Mraz.