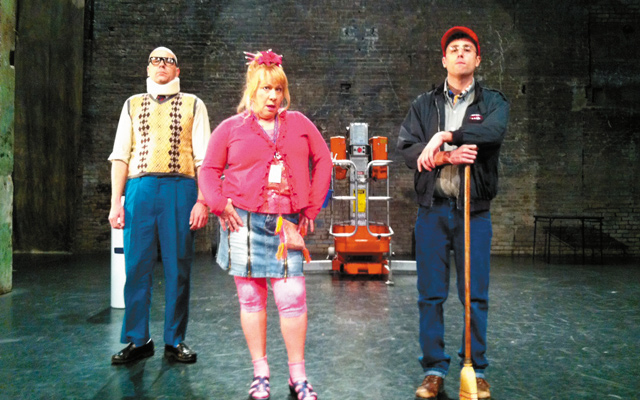 The War Within/All’s Well
Through June 10
Southern Theater, 1420 Washington Av. S., Mpls.
(612) 343-3390
www.ticketworks.comFor much of the 30 years of its duration, the Tony-winning Theatre de la Jeune Lune was on a par with the Guthrie, Penumbra, and the Children’s Theatres as the creme de la creme of Twin Cities playhouses. Since it’s closing four years ago Jeune Lune’s distinctive actors, masters of a physical comedy style imprinted by Jeune Lune’s Lecoq-trained founders, have continued to evolve that aesthetic among themselves and with other local actors. They have also been sharply attuned to social issues.

Since last year former Jeune Lune Artistic Director and Co-Founder Dominique Serrand has been co-developing a piece that takes on an issue that both major presidential candidates and parties don’t want you to look at too closely or deeply: war. However, The War Within/All’s Fair doesn’t portray war from a front line or political view, but from its germination in the human subconscious.

The idea is that the discord we individually nurse within ourselves ripples into dissonance and even chaos around us. Therefore, if we cannot put right the turbulence within ourselves, and be present to unfettered calm and stillness within our own autonomous selves, can we really then still the turbulence sweeping throughout the world? Hence, when countries are at war, to what degree are they acting out their own population’s collective unconscious? In other words, the composite of everyone’s individual subconscious.

This project started at the U of M with improvisations led by Jeune Lune veterans Steve Epp, Nathan Keepers, and Serrand. It came out of what Serrand says was “the horrific and lamentable dialogue on the web and on the waves, on just about every topic, from the questioning of Obama’s birth certificate to the persecution of immigrants. Notwithstanding the marathon of religious extremists, all more Christians than Christ(like), acting as the great authority on marriage, women’s rights, and so on.”

Now, the second phase of that U of M process can be seen at the Southern Theater with additional dialogue by Cory Hinkle and direction by Serrand. The ensemble includes Jon Ferguson who has found the experience to be, as he puts it, “very exciting. My character (is) the boss that everyone’s had at some point in their lives, that they would love to murder. He bullies, manipulates, undermines, all for control. He battles every day to keep control but all the while there’s someone ‘upstairs’ with more power. So ultimately he’s no more important than any of the others.”

In describing his invention of someone new, ensemble member Keepers shares “as an actor it’s always fun to create the character but it’s a different beast in a show like this. You’re in charge. You’re responsible, more so than in other shows, for carving out that person’s individual world. And it has to be so transparent and sharp. We have to say ‘we know that person’. On top of it, the theme of stupidity is a pleasure of mine. Not being stupid or dumb, but maybe saying something awful, like we hear every day from some jackass on television or the bus. That public stupidity we’re all subject to right now. Finding the character’s own personal logic. It’s a lot of fun.”

You may know Katie Hae Leo and Sun Mee Chomet from their first rate stage performances, but they are also notable playwrights. Leo’s Four Destinies is a compelling satire on adoption, sensitive to queer issues, and Chomet’s Asiamnesia was named Best New Script by the Star Tribune in ’08. They have now gone on to combine both their acting and writing talents in the examination of their unique experiences as Korean adoptees. Leo, from not having found her birth family; Chomet, from having found one’s birth family.

Leo says that her piece titled N/A “explores three health crises I’ve faced in recent years and how my attempts to understand why they were happening to me meld me to the brick wall that is my unknown history. As an adoptee who has not found my birth family, I am forced to speculate on where certain genetic diseases come from. In the piece, I took this a step further and created far-fetched mystical mythologies to explain their origins. I based these origin myths on real Korean stories and events. So I guess I’m trying to blur the line between fact and fiction when it comes to the mythology of one’s body.”

“On a more practical level, the stories I tell also touch upon the modern-day experience of navigating our health system. As a woman and person of color with no known genetic history, I often felt like a curiosity to doctors who were trying to figure out why I was having certain problems. In fact, more than one doctor initially dismissed  symptoms that were later accurately diagnosed by other doctors, with my first doctors suggesting that I was simply imagining things. I think this feeling is common for many women, that sense that you are Cassandra from the Greek myth, spewing outinformations with no one believing you. It goes back to the old diagnosis of ‘hysteria’ for women’s menstruation.”

Sun Mee’s How To Be A Korean Woman “investigates the expectations I was met with when I found my Korean birth family. I was raised in the US by a far-left feminist mother who raised me to be an absolute tomboy. My American mother proudly encouraged me away from wearing dresses and refused to purchase make-up and Barbies for me because of their sexist representation of women. She wanted me to be fiercely independent, outspoken, and fearless.”

“Conversely, the women in my Korean birth family I found to be at the polar opposite end of the spectrum. They were horrified by my lack of feminine grooming, which is considered essential in Korea’s historically patriarchal and conservative society. Much of my time reuniting with them was spent with their attempts to ‘fix me’, make me look like I’d never left Korea, and essentially feminize me according to Korea’s societal standards. Attempting to navigate both ideas of gender, as an adult, continues to be a challenge. Mostly because I know both strong opinions  come from women who equally believe they are expressing love towards me. But in many ways they are confining me. Essentially, they are both clouding the road of me defining my own identity with their fixed images of what it means to be a woman.”

Director Wendy Lehr says Beth Henley’s 1982 Pulitzer Prize-winning comedy “is -at heart- a play about family. The three Magrath sisters and their vituperative cousin, Chick (Billie Jo Konze) share a painful history. The sisters reunite by way of an extraordinary circumstance – Babe (Erin Mae Johnson) who has just shot her husband and middle sister, Meg (Lindsay Marcy), comes home for the first time in five years with all kinds of baggage. The play takes place on eldest sister Lenny’s (Tracie Hodgdon) birthday, October 23, 1974, possibly symbolic of the re-birthday ahead for all the sisters.”

When you see the play, bear in mind, as the director points out, that “the ’70s were not the ’60s. The summer of love was long gone and the national naivete regarding the unimpeachability of the president came crashing to an end. But the ’60s movements created new freedoms and the ’70s hinted at the need for responsibility.”

Lehr describes “the style is in the grand tradition of 20th Century Southern writers. In the South, family roots go deep and opinions are not often withheld. Attention to detail creates flashes of understanding, often to great comic effect. For example:

Meg: You think so?

Babe: More and more. Do you know she’s taken to wearing Old Grandmama’s torn sunhat and her green garden gloves?

Meg: Those old lime green ones?

Babe: Yeah; she works out in the garden wearing the lime green gloves of a dead woman. Imagine wearing those gloves on your hands.

In five lines we get information, insight, poetry, a laugh and a chill. To me, an exchange like this is very reminiscent of the short stories of Eudora Welty – another native, as is Henley, of Mississippi where Crimes of the Heart is set. Probably the most seismic incident in the play is why Babe tried to kill her husband. Without a full spoiler alert it has to do with her defending a black teenager. Her sister responds “I didn’t even know you were a liberal.”

He may not be as well known to the average educated American as other European playwrights like Henrik Ibsen and Anton Chekhov, but Georges Feydeau (1862-1921) is regarded as one of world theater’s great masters of farce. His complex twists and turns were considered light fare during the time he wrote, the Belle Epoque, a vibrant period glorified in Woody Allen’s recent film gem, Midnight in Paris and in Ernest Hemingway’s memoir sketches, A Moveable Feast. Those were the decades before World War I, when the Moulin Rougue and Folies Bergere helped define Paris as the world capitol of sensuality and fun. To this very day, puritanical Americans are thrown to stigmatize France as a den of iniquity and decadence, and the Belle Epoque reinforced that stereotype. That stigma has been embraced even in recent years by big-spending, pro-war Americans who raged over France’s reticence to join us in the Iraq War. Remember ‘Freedom Fries’?

Though Feydeau is best known on these shores for A Flea in Her Ear (1907), St. Paul’s Gremlin Theatre took notice of An Absolute Turkey which was commissioned by London’s esteemed Globe Theatre translated from Feydeau’s Le Dindon (1896). It’s always a good thing when lesser known, well written works by major writers get their chance to shine.

Director Brian Balcom, a masterful director of boldly sexual plays calls Feydeau’s classic “a hilarious sex farce about the indiscretions of the affluent Parisian lifestyle. Feydeau’s plays are about lust and the insanities it produces as the humor relies on characters who pursue their desires with a complete disregard for decency. It is this blind passion that drives them into such complex and chaotic quagmires. For being written at the turn of the century, the play is rather even-handed when it comes to sexual exploits. The female characters are just as advantageous as the men. No one is without desire or misdeed.”

At the Cowles, the Keigwin troupe’s presentation will include Mattress Suite, six short dances that explore human sexuality and the yearning for love; Runaway, which was inspired by the fashion scene, and Megalopolis, which imagines club culture in a futuristic city. Given his notable theatre choreography in work that addresses the human body and its relationship to Eros, you can be sure that Kegwin’s Minnesota debut will push the boundaries. And we like that up here.