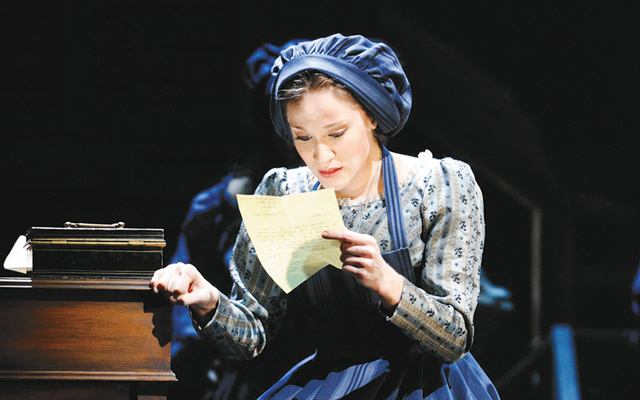 The 25th Anniversary Tour of the world’s longest running musical is here in time for the Occupy Wall Street era. Hennepin Theatre Trust President Tom Hoch says “Les Miserables encompasses timeless themes including love, grace and redemption – themes that are as powerful today as they were in 1862 when Victor Hugo’s novel was first published. The images of revolution in Egypt, Libya and elsewhere in the Middle East, and the clashes around the world between the rich and poor, demonstrate that the struggle for a better life has been a constant through human history.”

Kahlil Queen, who composed the compelling score for the anit-bullying musical, MEAN, is lightening up for the holidays with fun characters from different parts of the world,  You’ll hear some Salsa, some classical, and some Hip Hop. Queen says “I’d call it a bit whimsical with some reflective moments as Rudolph discovers ‘the Language of Christmas’ and the meaning of  being true to yourself.” The show, as the title implies, is an inside look at reindeer who try out for the ultimate challenge: flying for Santa to deliver toys all over the planet! 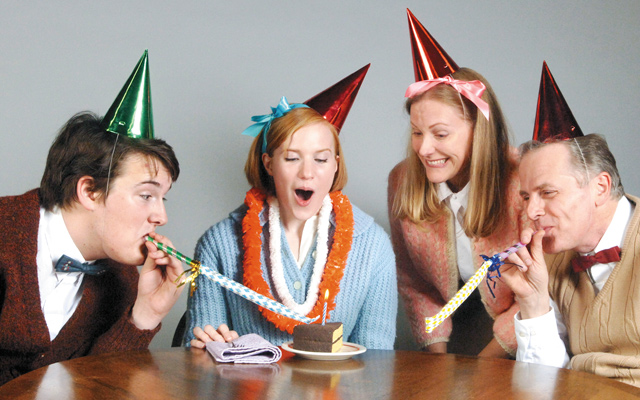 The Dining Room. Photo Courtesy of Act One, Too, Ltd

A.R. Gurney is best known today for his widely produced comedy about a husband and his pooch (and the play’s title), Sylvia. But a generation before his superb 1981 timebender was also widely produced. Director Lynn Musgrave calls it “a memorial, in many ways, to a way of life in decline – the comfortable, upper middle class White Anglo-Saxon Protestant environment in which he came of age. It’s symbolized by the increasing “irrelevance”of what had been the heart of the home and family: the traditional dining room.” Six actors portray 57 characters over the course of a “day” in a dining room from the 1930s Great Depression to contemporary times. They include a father in denial over his brother’s sexuality and a daughter asking her father to take her and her undisciplined kids back under his roof while she chooses between her husband, her married paramour, and her lesbian lover.

Charlotte Von Mahlsdorf  (1928 -2002), Berlin’s most celebrated transvestite, during both the Communist and post-Communist era, saw her gender and sexuality in a way quite different than how they would be seen today. As playwright Doug Wrights has pointed out “Today, we’re so sophisticated about what constitutes someone who is transvestite; what constitutes someone who is truly trans, and how that differs from homosexuality and all those issues. Charlotte was coming out of this 19th Century model that was iterated by sexologist Magnus Hirschfeld, who had this whole theory of three classes of gender: male, female, and a third catch all group for anyone in between. So Charlotte would always say there’s “no war within me between male and female. I’m simply a member of the Third Sex. Female spirit in a male body and that’s my biology and that’s my fate and I’m completely at home in that construct.” So it was a very different way of perceiving gender than I think we have today, where we’re so binary about it.”

The Von Mahlsdorf story is an epic one. Her father was a physically brutal Nazi army officer, yet others in her family accepted her as she was. She was not ashamed of her male genitalia and she said she liked being like a housewife because she felt she was naturally suited to that. She never wore a wig or make up and preferred to wear a simple house dress and shoes. She wasn’t about being camp or a drag artist.

After the psychotically homophobic Hitler era, the Soviet Union oversaw the Communization of East Berlin. Unlike American Right Wing hyperbole, the so-called commies were not so sympathetic to so-called “fags” and you can guess that the “pinko” preceding that may have as much to do with homosexuality as it does with communism. In that time her home became a gathering place for queer folks when demolition was slated for a legendary gay bar dating from the post World War I Wiemar Era. It was dismantled and restored in her basement. The upstairs became a museum.

Wright’s play gives food for thought about the invasion of privacy. Rumors abounded that Von Mahlsdorf was a spy for the Stasi, East Germany’s version of the KGB, but it must be remembered that the Stasi had recruited, by some accounts, one spy for every six people in East Germany. The Oscar-winning Best Foreign Language Film The Lives of Others portrays this Stasi phenomenon. A similar pattern is seen in today’s Iran, which the recent lesbian-themed film Circumstance also portrays. In 2004, the year I Am My Own Wife won the Pulitzer and Tony, it struck an American nerve because the issue of Extraordinary Rendition implemented by The War on Terror was considered by many to be a shocking human rights violation that shredded constraints of the Geneva Convention.

When the Berlin Wall fell in the ’80s Von Mahlsdorf simply appeared to the West as a 65 year old man wearing a dress in orthopedic shoes. Wright shaped an important bio-play that provides a fascinating inside look at the Eastern Bloc’s underground queer subculture.

The Jungle revives its 2006 smash hit with the same solo star, Bradley Greenwald. His was the most acclaimed Twin Cities performance that year. Greenwald shares, “The tension of the play comes to terms with an amazing human story of survival that gets tarnished by the un-mythologized details of day-to-day existence.”

Director Joel Sass says they’re reviving it “for the same reason a climber repeatedly scales a challenging peak, or a hiker retraces a favorite route.

The musical, Forever Plaid, has become a classic of 1950s-style nostalgic entertainment, with the early ’60s thrown in for good measure. Its nonthreatening featured male quartet, splendidly harmonic and sweet, is a refreshingly positive view of men in general. Their sound recalls The Four Freshmen, The Crewcuts, and The Lettermen. Regarding the holiday version, Music Director Andrew Cooke says it “pays fond but slightly irreverent tribute to those early TV holiday variety shows, starring the likes of Perry Como and Ed Sullivan.” Sean Nugent stars.

Rodgers and Hammerstein’s glorious version of the classic fairy tale actually originated on CBS TV in 1957 starring Julie Andrews. In 1965, CBS remade it featuring Leslie Anne Warren and in 1997, ABC crossed the racial divide by casting Brandy as Cinderella. On stage at the Ordway Jessica Fredrickson is the star. You can also bet that the designs created by Penumbra Theatre’s scenic shop and Tulle & Dye will be something to behold. Producing Artistic Director James Rocco says Cinderella reflects the Ordway’s way of “re-visioning classics.”

The region’s premier theater for persons with disabilities has become a first-rate producer of musical productions. This holiday season the versatile Aaron Gabriel is composing some new tunes. Scotty Reynolds who made quite a splash for “glittering” reparative therapist Marcus Bachmann’s office will be performing along with the likes of Kevin Kling and Eriq Nelson. Director Tod Petersen says “I always want to make sure each and every actor–no matter what his or her gifts may or may not be–is given a voice in the process.”