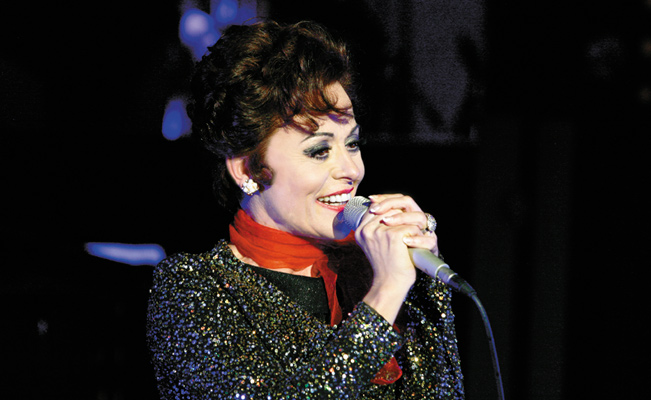 “There wasn’t a thing that gal couldn’t do – except take care of herself.” – Bing Crosby

Her short life still haunts us and has been the subject of many stage treatments. But playwright Peter Quilter’s smash hit London musical, End of the Rainbow, is considered to be the gold standard. It now plays in a limited run at the Guthrie with Tracie Bennett, its London star.

Though this ecstatically praised play with music features various Garland vocal mainstays like The Trolley Song, Come Rain or Shine, and Somewhere Over the Rainbow, Bennett says it’s about “acting pieces rather than songs, so it’s not a tribute. There’s elegant Judy, happy Judy, old-fashioned medley film You Made Me Love You Judy, the drugged Judy, and then we see ‘absolutely fucking it up in the concert’ Judy.”

Judy Garland was born Frances Ethel Gumm in Grand Rapids, Minnesota in 1922. Rumor has it that the family had to leave town because her father, Frank, made passes at young local men. Her mother by all accounts was cruel. And both parents, who were vaudevillians, promoted Frances Ethel and her two sisters, Mary Jane and Dorothy Virginia, as a singing trio before Frances Ethel became Judy Garland when signing on with Metro-Goldwyn-Mayer (MGM) in 1935. When she died of a drug overdose in 1969, some say that the shock and disbelief by Judy’s adoring gay fans fed into the fury of gay lib’s historic Stonewall Riots.

Judy made several memorable films. Meet Me in St. Louis was one of the most popular films of the 1940s and her astounding turns in A Star is Born and Judgement at Nuremberg are among her most admired performances. She married Vincente Minnelli, who directed two of the 1950s’ greatest films, An American In Paris and Some Came Running, which I submit is The Great American Film. Minnelli was often said to be gay or bisexual. Their daughter Liza (Cabaret, Tell Me That You Love Me, Junie Moon, and The Sterile Cuckoo)  became a phenomenon herself. Garland’s other daughter, Lorna Luft (father, Sid Luft), is a highly accomplished actress herself. Both daughters have been enduring supporters of GLBT equality and AIDS funding.

I spoke with Olivier-winner Bennett about her views and research. I was struck by how far we’ve come yet how similar we still are regarding the values of Judy’s time on earth. Consider how GOP Tea Partyers in some state legislatures and Congress actually want to roll back child labor laws. In the past, the lack of such laws paved the way for exploitation of child actors and other child workers.

JT: Judy Garland is perhaps the biggest show biz icon in gay culture. There’s a kind of goddess worship of brilliant female singers that gay men have long exalted. What are your thoughts on her popularity with gay men over the generations?

TB: It’s not just the goddess worship thing, it’s the connection with the tragedy surrounding her. My gay friends in London said that at that time they wanted to protect her. She’s vulnerable and they all wanted to protect her because their story is her story.  She sings the torch songs and the tragedy songs. Like they would understand the torture of her life. That’s what they tell me.

JT: Judy’s drug addiction is said to have begun at a very young age.

TB: When she was hired to to the studio (MGM) by age 11 or 12 then the wonder drugs came in like dexadrine.  And nobody knew they were addictive. They were marvelous, allegedly. They got you up. You looked fabulous. You slimmed down. Your brain was focused. And they were fantastic and they were the hardcore ones that obviously she kept taking. But I believe that by the time she did The Wizard of Oz (released in 1939) that she was totally an addict.

JT: Alot points to her mother being very domineering. She was the classic stereotypical stage mother and enabled what we might call today, her prescription drug use.

TB: It might be hearsay but apparently she didn’t like her mother at all – the control element. She was allegedly very pushy in the studio. The control that her mother had and that the studio had, to either get married or not get married, to not have a baby or get a baby. What does that do to to a person? What does it mean when you can’t get a Knickerbocker Glory when you’re 12? You want a Knickerbocker Glory! You want to be a kid! But of course, you’re working! And the laws were very different then. But the mother thing got kind of sorted out because she died in a car park (parking lot). But she did have kind of a love/hate relationship.

JT: Her second husband Vincente Minnelli – how did he shape her?

TB: He made her beautiful. She felt fabulous. He was a gentle man. They take him for gay, whether he was or not. He couldn’t deal with her by the end. There’s a story. They were married. She was in Paris. They were walking down the Seine and she said ‘hold my hand’ and she had a vial of pills and she just threw them in the River Seine. And there was an unwritten thing meaning I will never take these again. I don’t need them. Well of course, she did because he started working really hard on something or other and she was getting more and more demanding. So she felt left alone. So the more she got left alone the more she took tablets again and the more he got into work.

JT: There was a very different view of children and child labor when Judy was growing up. She was a girl of her time and then some. It’s very easy for people of different circumstances and of later generations to get puritanical and call her a slut or a dope addict.

TB: That era was a nightmare! Of course, they wouldn’t know the difference maybe then that we do now. It’s hard to erase what we know now and look back then, now isn’t it? It wasn’t easy for women and I’m sure it wasn’t easy for anyone.

My own mother wasn’t allowed to buy property unless she was married. My mother said she couldn’t have a bank account, so maybe you did have to have a protector who dealt with your money. (In Hollywood) Lana Turner could go out because she was a sex symbol – with a chaperone. But Judy couldn’t even go out because she was meant to have a family-oriented kind of image – the girl next door image.

It shocks me that people used to get married so many times. But they couldn’t live together ‘in sin’ could they? That must have changed somebody’s head – marrying people too quickly. Not just Judy -everybody! Because you couldn’t kind of live together. That puts terrible pressure on people.

JT: As much as I love, and I do love, vintage Hollywood films, I now know how stringently controlled the actors were. Actors, for whom observation of people is central to their acting craft. But how can you observe when everyone in public is observing you?

TB: That’s absolutely very true. But the other side of it is that inside that contract for seven years you knew what that entails. Now I’m not saying that Judy did because she was a kid for God’s sake.

JT: Her mother would have handled all that.

TB: Exactly. So she, by default, had to do what she was told without being given the choice, nor (did she as a child) have the intellect maybe, legally to read everything. She wouldn’t have known. So you pushed and pulled. A lot of mothers were doing that at the time. They’re still doing it now. And you’re going: haven’t you learned anything?