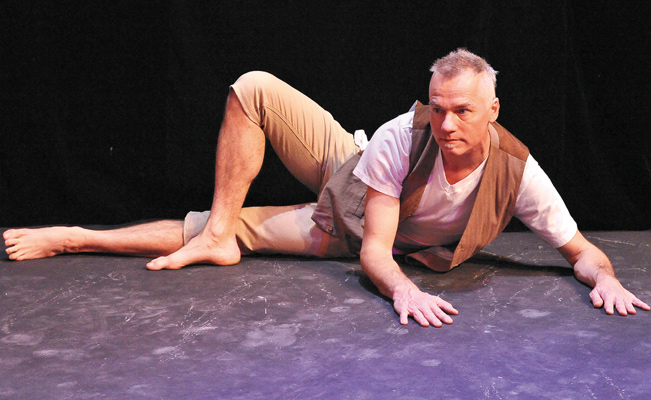 Curators David DeBlieck, Dennis Yelkin, and Gerry Girouard will have you chewing on these questions when you see Que(e)ries, an evening of dance steered by out gay artists reflecting their life observations at Patrick’s Cabaret. DeBlieck shares, “When I started studying Dance History, I was immediately drawn to steamy photos of young, hunky Ted Shawn, often dancing with no shirt and surrounded by a gaggle of other glistening young bucks. My gaydar went wild! More complicated images of Kazuo Ohno doing butoh in female drag opened my mind to larger issues of gender performance and embodiment.”

DeBlieck’s historical view will play out in 15 Poses which uses photos of the iconic ballet dancer, Nijinsky, with musical selections by Claude Debussy, Karl Zero, and Jimmy Somerville, who was synonymous with the ’80s gay club scene.

Yelkin draws from his own personal connection with gay history. He became aware of his sexuality in the late ’50s and says, “As a young boy, it made me afraid and guarded of who I was. Living near San Francisco I would read newspaper stories about the tenderloin area and gay prostitution arrests. Negative as these stories were, it let me know that there were others like me. Then Stonewall happened.”

In the tradition of the Patrick’s venue, Yelkin will celebrate the male body electric. He curates a nude photo session on stage between photographer Robert Guttke and straight performer Jerome Bowden. Bowden grew up with a gay brother, Nic. He recalls that “a poor use of the word ‘gay’ was being thrown around in like third grade. My mom and my brother pretty much put an end to that right away.”

Yelkin joins Girouard in a duet that, Girouard relates, “was created as a Memorial Dance for Joan Calof, a great supporter of GLBTQ people and Patrick’s Cabaret. It plays with the overlapping need for touch, in desire, grief and intimacy and to just have two people of the same gender just dance together.”

One of Minnesota’s great veteran dancers is part of Que(e)ries. Jim Lieberthal says that “being invited into this particular assembly of artists has created a zone for me to do a piece which is not usually a part of my focus. The idea of loving and referring back to that love as a focus in what I feel is a specifically gay resonance. It is part and parcel of what I will present this time around. I feel that my being out opens up shutters and allows a sensitivity to see what might be possible, along with an impetuous impertinence to actually ‘go there.’ That is an inheritance of my out-ness for which I am very grateful.”