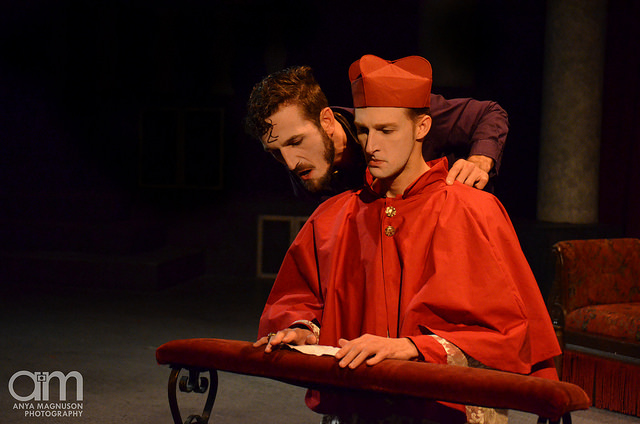 Few plays in theater history reveal so powerfully the nefarious ways in which women can be oppressed psychologically and institutionally by men as The Duchess of Malfi. The Jacobean tragedy is now in a spellbinding production by the Classical Actors Ensemble. In John Webster’s 1612-13 tragedy a widowed Duchess dares to attempt to live as a relatively free spirit in a culture insidiously controlled by the Roman Catholic Church, the aristocracy, and a brother whose affections are just a bit too passionate. Though set in Italy it contains an implicitly heretical critique of power dynamics not unknown under the rule of England’s mystifying King James I (hence, the term “Jacobean”).

Director Joseph Papke has ingeniously led the entire cast to a superb balance between Jacobean language, authentic focused emotion, and impeccable timing. The show is an epic, a behavioral study, and a thriller all rolled into one.

Hannah Steblay is a revelation in a title role that can be easily misguided into histrionics. Instead, she gives us a flesh and blood woman preyed upon by self-interested men. The vibrant Steblay embodies a lovable blend of the heroic and the human, very much what Webster had in mind when he wrote the play. 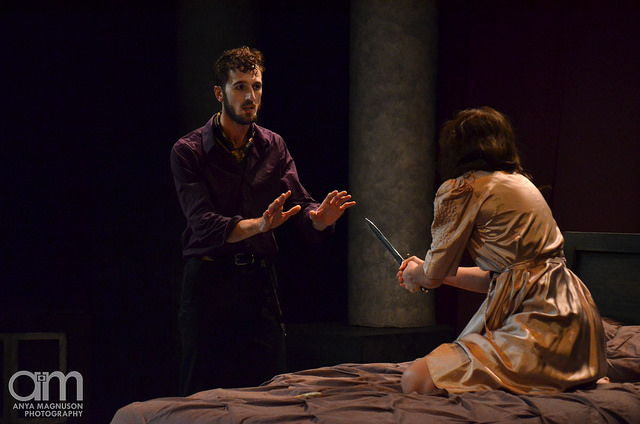 Michael Ooms is numinous and devastating as Bosola, a figure whose late medieval/early Renaissance situation could be compared  to portrayals of worn out gangsters in 20th century film noir. Bosola is a man, of which there are always many, who because of his low station in life and criminal record, is an automatic tool for the dirty work of more powerful “respectable” men. Ooms mines the deepest emotions of the marginalized Bosola and elicits an anguished reluctance toward the grisliness he is forced into.

Webster, as much or more than his contemporary, William Shakespeare, comprehends the plight of women under patriarchy as well as the plight of powerless men under patriarchy. Men dominate women. Men dominate men. The women in the play and Bosola exemplify this. (The Bard approaches the same awareness in Measure for Measure but Webster digs deeper.)

The Duchess’s two brothers live primarily for their personal pleasure and unexamined egos. One, a Cardinal, played with cold classic elegance by the magnetic Neal Beckman prizes the material and the carnal over the spiritual.* This of course is a paradox because he lives in classic erotophobic conflict within himself under conservative religion’s edict that the spirit must necessarily be at odds with the flesh. And of course his theology is built on that, though it’s the commoners who are expected to adhere accordingly. Powerful males get a pass. 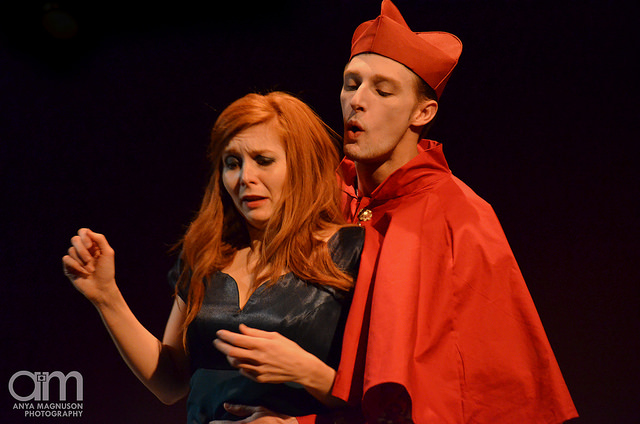 The Cardinal exploits women at will and as if entitled to do so. That said, he is entitled to do so. Though in our own time the Church has become known for child molestation, Webster reminds us that adult women could also be the province and property of errant priests. Moreover, given the macabre nature of the play the exploitation of women is always something to be taken seriously, never for winks and nods or crude laughs.

Daniel Joeck, chilling as the Duchess’s Duke brother, is utterly visceral in portraying a man obsessed by the idea that his sister has actually experienced sex. Joeck the actor bravely reveals a man who dwells on that fixation. Incest was deemed a capital sin in the English Renaissance and it’s an incestuous state of mind which infuses the Duke’s maneuvers and his manipulation of Bosola to denigrate his Duchess sister.

One of the production’s brilliant touches is the casting of Steblay along with Lucas Gerstner and Nicole Joy Frethem in roles of characters targeted by the play’s erotophobic clerical-aristocratic establishment. These three are sensual and tactile in their presentations in stark contrast to the men whose are hard-edged and angular. Sexual frustration is channeled toward domination and physical cruelty. 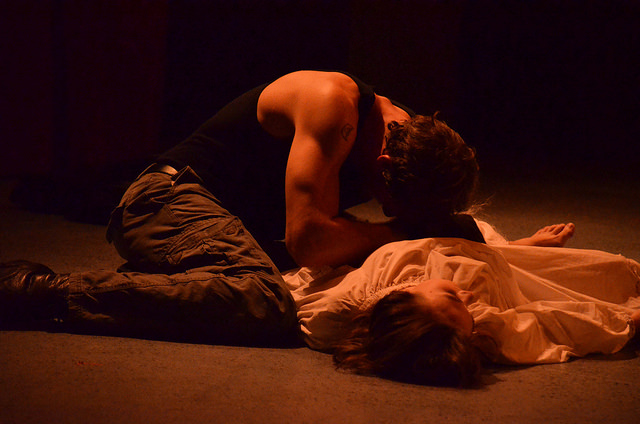 In sum, this is production of heightened intelligence, aesthetic beauty, and emotional power. Afterwards you may want to meet with fellow audience members to discuss it.

*An implicitly revolutionary aspect of Webster’s play is that the hidden institutional rape committed by powerful men is contrasted by the Duchess’s unhypocritical open desire to love as she pleases beyond the eagle eye of privileged male domination.