An AIDS Film Like None You’ve Ever Seen: ‘Dallas Buyers Club’ Is A Glorious Testimony to Human Tenacity and an Unlikely Straight Ally

He carried on with this lifestyle after contracting HIV because he didn’t even know he had it until after its progression into full-blown AIDS. Woodroof even partied hearty after the diagnosis. This was 1985. He was given a month to live but didn’t pass away for another seven years in his forties. The film Dallas Buyers Club is the story of this man’s extraordinary quest to take control of his own body and its healing process and those he tried to help the best he knew how along the rocky way.

Matthew McConaughey sizzles like bacon on a hot campfire griddle as Woodroof. In the beginning he is established as both a daredevil bronco-bustin’ man’s man as well as decadent ladies’ man. Having shed 40 pounds for the role, McConaughey is skin and bones with a defiantly cocky attitude. Volatile. Arrogant. Proud. Shamelessly homophobic and sexist. (‘Pussy’ is another word that often drips from his lips, albeit in lurid and whimsical ways, unlike his homophobic epithets.) When given the diagnosis Woodroof threatens the doctor for thinking he has insinuated that he might be homosexual, therefore insulting his manhood. It’s one of many perfectly dangerous moments McConaughey ricochets with throughout this Oscar-caliber performance.

Of course, in 1985 AIDS was overwhelmingly seen as a ‘gay disease’. Much of the nation still thought you could get it from a toilet seat. The rumors about Rock Hudson were starting to mount despite his ‘passable’ appearance at the previous year’s Oscars. In other words, the nation was massively uninformed, disinformed, and driven by irrational fears. It is legitimately comparable to the mass hysteria that swept after 9/11. Hence, as Dallas Buyers Club painfully and enragingly points out, in the mid-’80s there was an optimum atmosphere to push dubious drugs onto a cowered and still largely closeted, much-ghettoized gay populace.

One of the most infamous drugs was AZT and this becomes a major issue in the film. It was an experimental drug, widely distributed, that actually hastened the disintegration of the immune system and whose toxic side effects the Food and Drug Administration had known about for decades. Nonetheless, Big Pharma promoted it and hospitals bought into it, resulting in an insidiously profitable collusion between the two. Brazenly operating as a legal cartel essentially, this collusion saw to it that costs were driven way way up and those with HIV/AIDS were left to beg… at best.

Therefore, Woodroof/McConaughey takes his healing into his own hands and goes beyond the nation’s borders to procure massive amounts of drugs, vitamins, and proteins not sold freely to US citizens because of the FDA. Such alternatives had been shown in many cases to slow down the virus markedly and greatly improve quality of life but were illegal in the US. Woodroof creates a massive underground business in which he profits, sometimes ruthlessly, but which also prolongs many lives.

Director Jean-Marc Vallee astounds with his re-creation of the zeitgeist of the 1980s. Through ambience, energy, and imagery it’s as if we are transported back in time to a generation ago. What must be especially appreciated is that the straight party and sex scene is shown as very nasty. The gay bar scenes are accurately sexy to the period but the hedonism in the film is clearly dominated by straight redneck culture rather than gay subculture – something overlooked willfully by the reactionary mentality and religious zealotry of the time.

Two marvelous supporting performances add to Dallas Buyers Club. Jared Leto, who also shed weight for the shooting, plays transgender ‘Rayon’ whose drug habit exacerbates her downward spiral. Jennifer Garner endears as a physician who, like Woodruff, sees health care as a right not an elite privilege, and does what she can to stay true to the Hippocratic Oath. But this is one of the film’s various troubling conclusions: a corrupt pharmaceutical and health care system means such an oath is systematically neutralized. 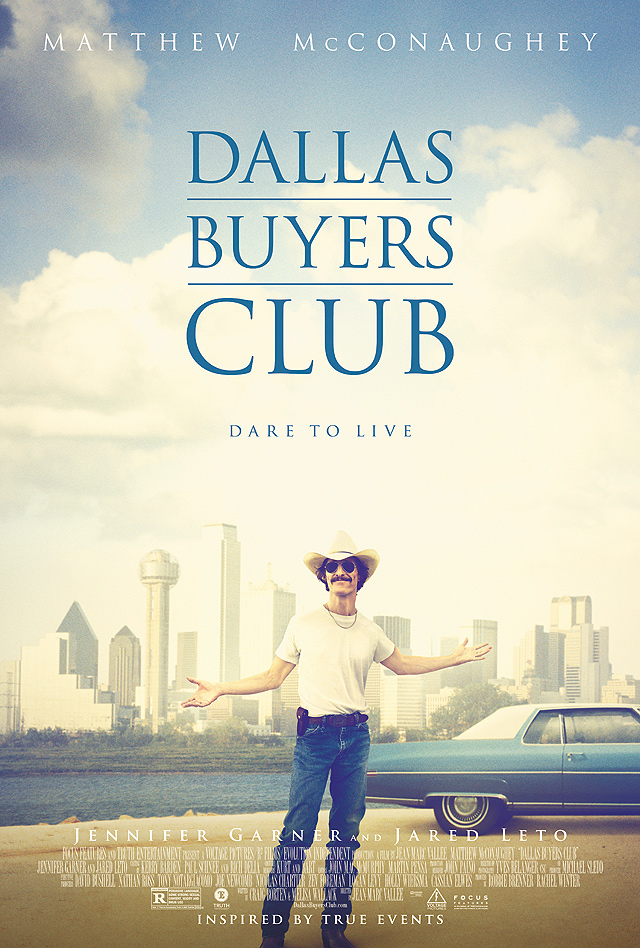