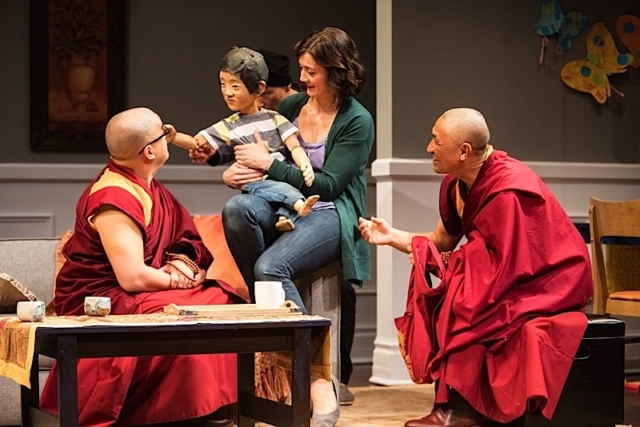 Sarah Ruhl has entered the ranks of the top American playwrights with such exceptional comedies as The Clean House, In the Next Room (or The Vibrator Play), and Dead Man’s Cell Phone. Her ascent continues with The Oldest Boy, now in its regional premiere at the Jungle Theater. It tells the story of an unassuming white mother coming to grips with the fact that her three-year-old son has been selected to become an exalted spiritual leader on the other side of the world, in Tibet. When a lama and a monk come to essentially lobby to take her child away to train and align him for his supposed life’s purpose, she is confronted by her own beliefs and deep emotions. 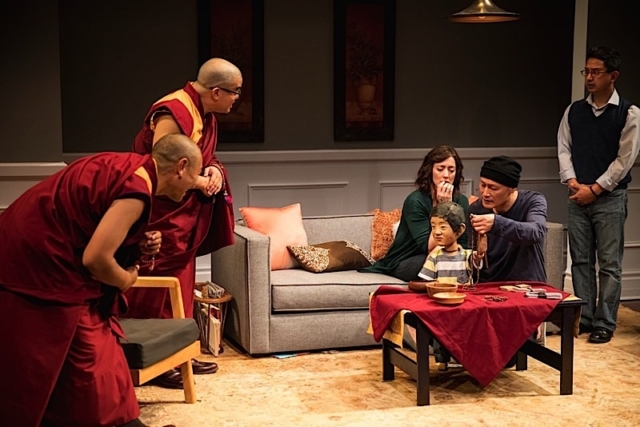 Christina Baldwin gives a sublime and numinous performance as Mother, the likes of which are seldom seen in comedy. She reveals a trickling cascade of emotions from start to finish and leaves us with no pat conclusions. It is a performance that genuinely confronts the audience on deep levels regarding parenting and religious conviction. Puppeteer Masanari Kawahara is delicate and endearing as Boy, whom he gives actual voice to. This mother/son pair tugs at the heartstrings in a profoundly organic way. They are at the center of a superb cast beautifully enhanced by performer Yeshi Samdup’s hypnotic interpretation of traditional Tibetan dance and music.