A Rich and Dreamy ‘Evita’ Captures the Seductiveness of Celebrity 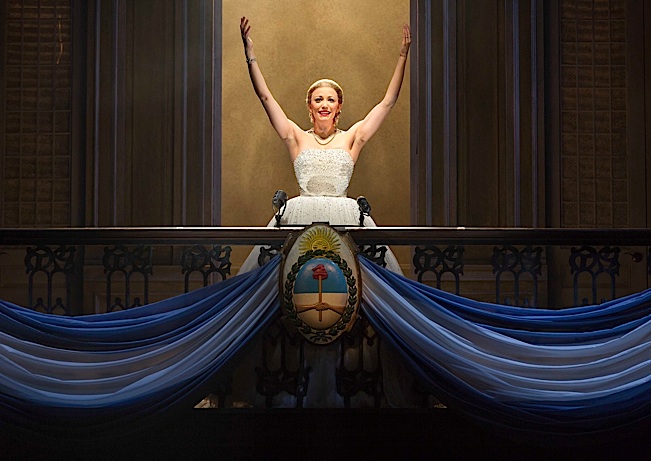 The Broadway revival tour of composer Andrew Lloyd Webber and lyricist Tim Rice’s Evita at Hennepin Theatre Trust’s Orpheum is a lush and dreamy meditation on the life of Argentinian First Lady Eva Peron. Her husband Juan Peron, like Eva, was a populist power-grabber, who outfoxed and axed his way to the Presidency with her ambitious assistance. Eva hated the middle-classes, what we might generally refer to in the US, as the country club set, because her middle class grandparents wouldn’t allow her or her mother to attend her father’s funeral. Eva’s hatred is understandable but to drive a political agenda with that as your emotional grounding is obviously a recipe for disaster. Moreover, the musical reflects on that agenda with a brilliant political grasp, seldom seen in musical theater. (The Cradle Will Rock and Miss Saigon come to mind.) My only nitpick is that there needs to be an additional scene about Peron’s behind-the-scenes strong arm tactics against his enemies and average citizens who disagreed with him. That said, Sean MacLaughlin’s performance is a superb embodiment of Peron as a charismatic figure whose handsome visage shields ugly brutal tendencies. In addition, MacLaughlin’s voice is beautifully commanding. 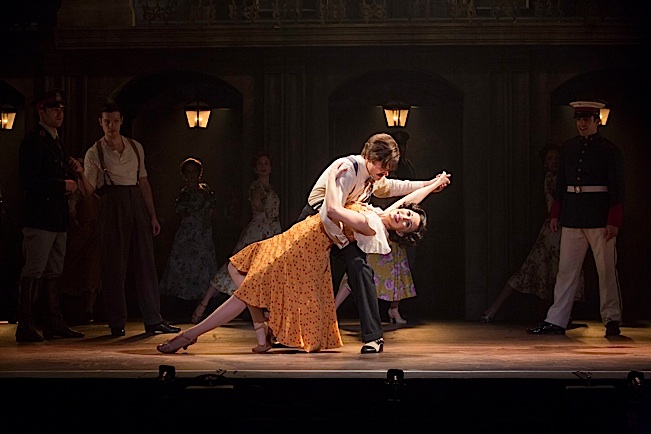 However, it’s Caroline Bowman’s Eva that makes this particular production a revelation. Having seen five different women play the role over the past three decades, Bowman’s interpretation is probably the truest in that she has found the youthfulness that drove Eva so hard, too hard, to attain her goals. Actresses and directors tend to head a bit too much in the arch villain direction in portraying her, which can work theatrically very well, but it makes it easier for us to judge harshly against her and let ourselves off the hook. (One lyric rightly says, in essence, to the audience: “you’re the same”.  In Madonna’s case, she went too much the opposite direction in the film version making Eva too sympathetic and her voice lacked the range necessary.

However, Bowman does have the chops, and she ingeniously shapes the woman into a figure who is both despicable and endearing. Despite some moments where her diction could sharpen, Bowman’s is a magnificent portrayal that serves the musical’s epic sweep as well as any actress I’ve seen play the role. 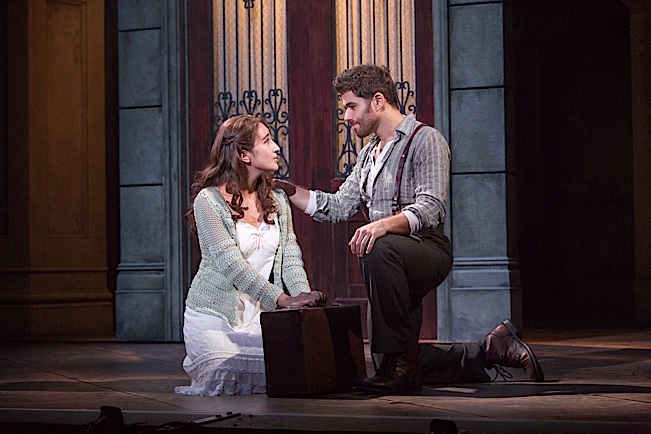 Krystina Alabado as the Mistress and Josh Young as Che. Photo by Richard Termine.

Moreover, Josh Young as the genuinely populist narrator, Che, is nothing less than mercurial force of nature as he counters Eva’s arrogance and hubris with biting commentary throughout. He understands how despite her populist pretensions, she has actually worsened the situation of the poorer classes. One senses Che is a Marxist (previous productions have modeled him after Che Guevara) but that Eva’s understanding of that political philosophy is coarse and crude at best. Young has a dazzling vocal range and a splendid ability for delicacy in contrast to true forcefulness. Of course, these superior vocals owe incalculably to Lloyd Webber and David Cullen’s majestic orchestrations given soaring expression by conductor William Waldrop’s musicians and Mick Potter’s sound design.

Neil Austin’s ethereal lighting design emphasizes the festive as Eva discovers the vitality of Buenos Aires and the spectral in the militaristic scenes. Zachary Borovay’s historical projections rivet and suit the musical’s cautionary take on celebrity and propaganda perfectly. Christopher Oram’s costumes sharply perceive the class levels, which are of course, at this musical’s inner core. Indeed, it’s totally understandable to be rightly enraged at exploitation by decadent wealthy interests. But what if you let that rage get channeled toward self-destruction, either as an individual or a society, and in Eva’s case, both? These are things that Lloyd Webber and Rice have left us to mull over, and frankly, they are possibly more timely now than when the musical first premiered in the 1970s. 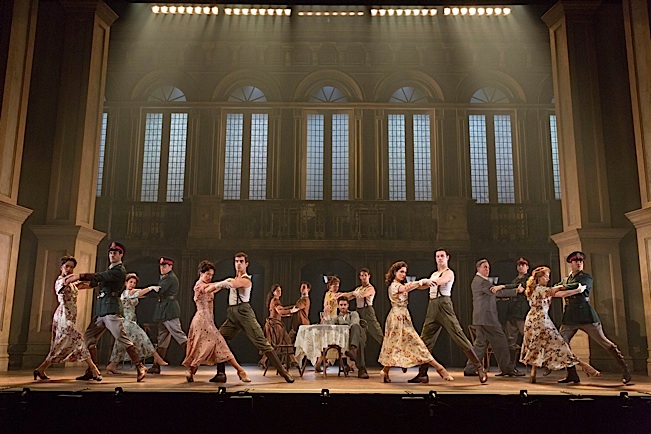 The Touring Cast of ‘Evita’. Photo by Richard Termine .

Director Michael Grandage’s direction and Rob Ashford’s choreography must surely be noted for shaping the actors’ characterizations but one thing that is truly a hallmark of this revival, that must come out of Grandage and Ashford’s sensibilities, is how vividly it transitions into the section where the populace starts to see Eva as a kind of holy force sent by the Christian Sky God. ‘Santa Evita!’. Politics morphs into religion. The moment where actors Patrick Oliver Jones and Alison Mahoney play a poor husband and wife who come to have their infant blessed by Eva has a gripping ironic beauty that I don’t recall perceiving in previous stagings. It’s as if Eva is ascending toward deification as the crowd seems to beseech her.

In the 1980s the US elected its first actor President and ever since then the cult of personality has dominated American politics to a reckless extent. Since then Both major political parties have been in the grip of that cultishness. Many in today’s Kardashian America with the profit-gobblers in Chatty Kathy media exalt mediocrities like Justin Bieber and Miley Cyrus and overpraised post-adolescent narcissists like Jennifer Lawrence. The Oscars and the Tonys have made profoundly, even shockingly, poor choices in top awards in recent years, as if their own members do not even understand the crafts they are supposedly assessing. 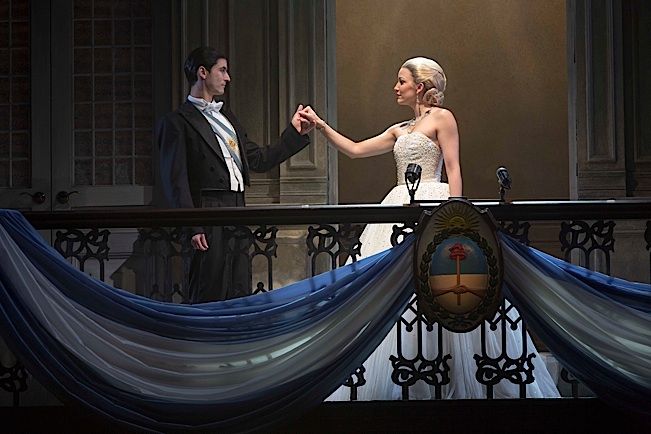 Worse yet, political figures and news reporters have become celebrities and seem to be almost totally out of touch with just how their policies and coverage (and/or lack of it) may impact their lives. Their hairdo, their personal wardrobe, or an irrelevant clever sound bite are light years more important than their record and their way of thinking. Ronald Reagan, Bill O’Reilly, Anderson Cooper, and Martin Scorcese have been officially deified by some segments of the American public, most of whom, have not seriously and fully examined their records. Therefore, Evita is still a musical that needs to be seen and thought about. Over three decades later we can legitimately call it a prophetic work.

Note: Lovers of Lloyd Webbers’s The Phantom of the Opera may be stunned by how sharp-edged the feel and sound of Evita are in comparison with the voluptuous, swelling atmosphere of Phantom. But that simply exemplifies Lloyd Webber’s marvelous range.